The Tower of London

Trip Over to London

Indulging my passion for history and bringing back memories, I hadn’t been to visit the Tower of London since I went on a school excursion a very long, long time ago!! Not to mention my great fascination for standing in places where some historical figure stood centuries before me, albeit, Anne Boleyn was getting her head lopped off, and fortunately I wasn’t. Being in a building that was built 1000 years ago and learning all about what has gone on there in in the past thousand years is unbelievably interesting.

The White Tower, the main tall building that once dominated the London skyline, was built in 1078, by William the Conqueror and was extended and added to for the next few hundred years. Throughout its life it has been used as a palace, an armoury, a zoo, the Royal Mint, and a prison right up until 1952.

To get to the Tower catch the Circle or District tube lines to Tower Hill, then follow the signs to the Tower. As you leave the station you will see a huge chunk of the old city walls from the original Roman city of Londinium, built 2000 years ago. I love an old wall, and this is a serious wall, 3 metres thick, now being guarded by a bronze statue of the Emperor Trajan.

As you walk through the tunnel under the road there are modern art works depicting various London scenes, then you emerge on to the path that leads you around outside the Tower walls with many photo opportunities, then down the hill to the entrance at the West Gate. Having become a member of the Historic Royal Palaces, I was able to avoid the queues for tickets, but did have to join the bag checking queue. A sad reality of life these days, where a few lunatics have made it so these airport style safety checks are necessary everywhere. 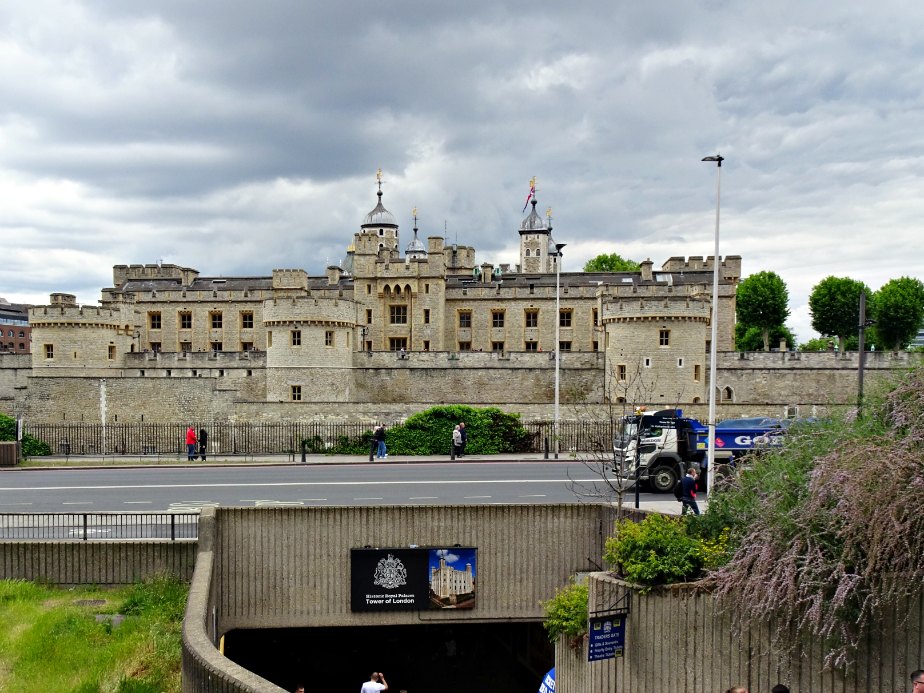 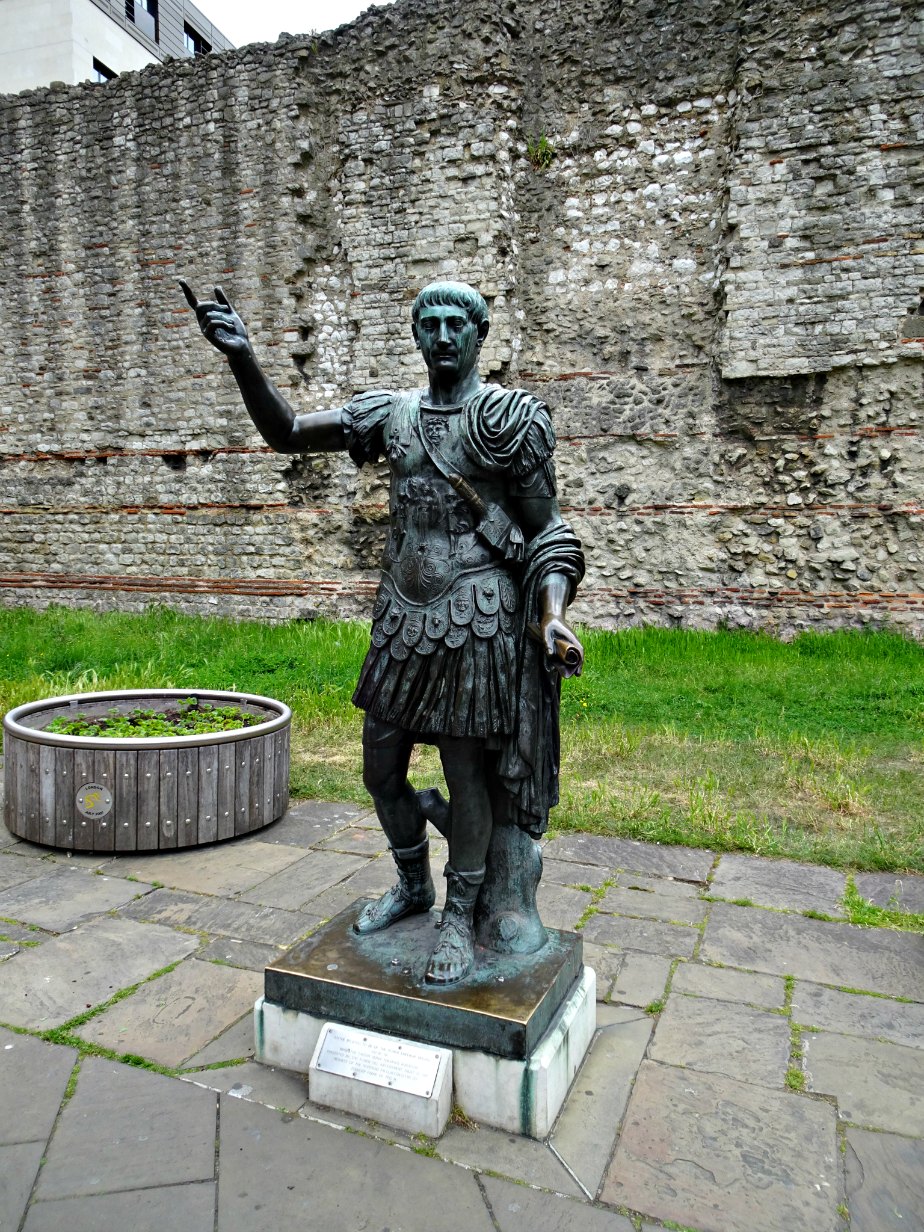 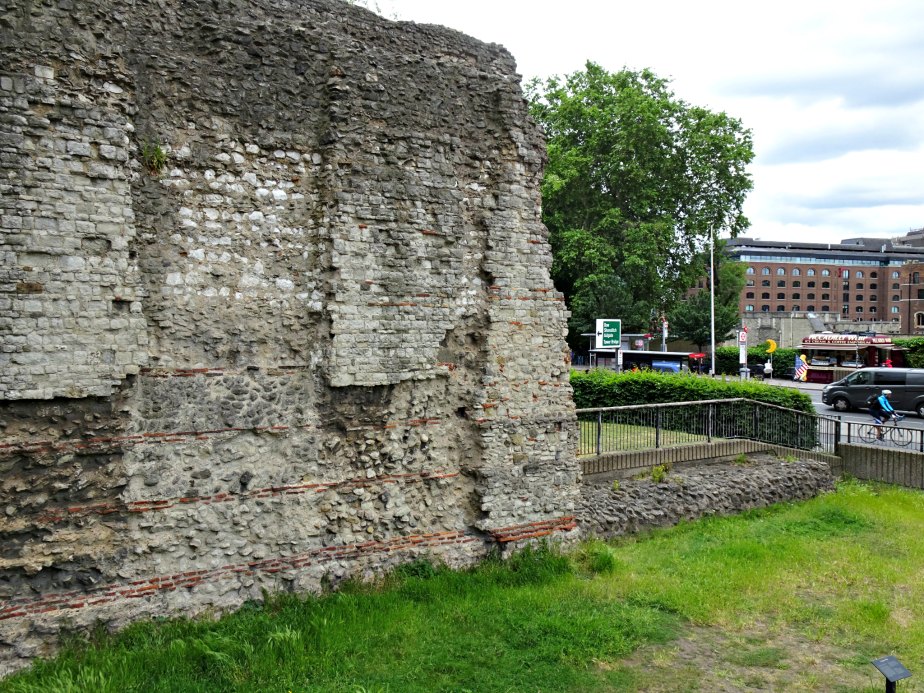 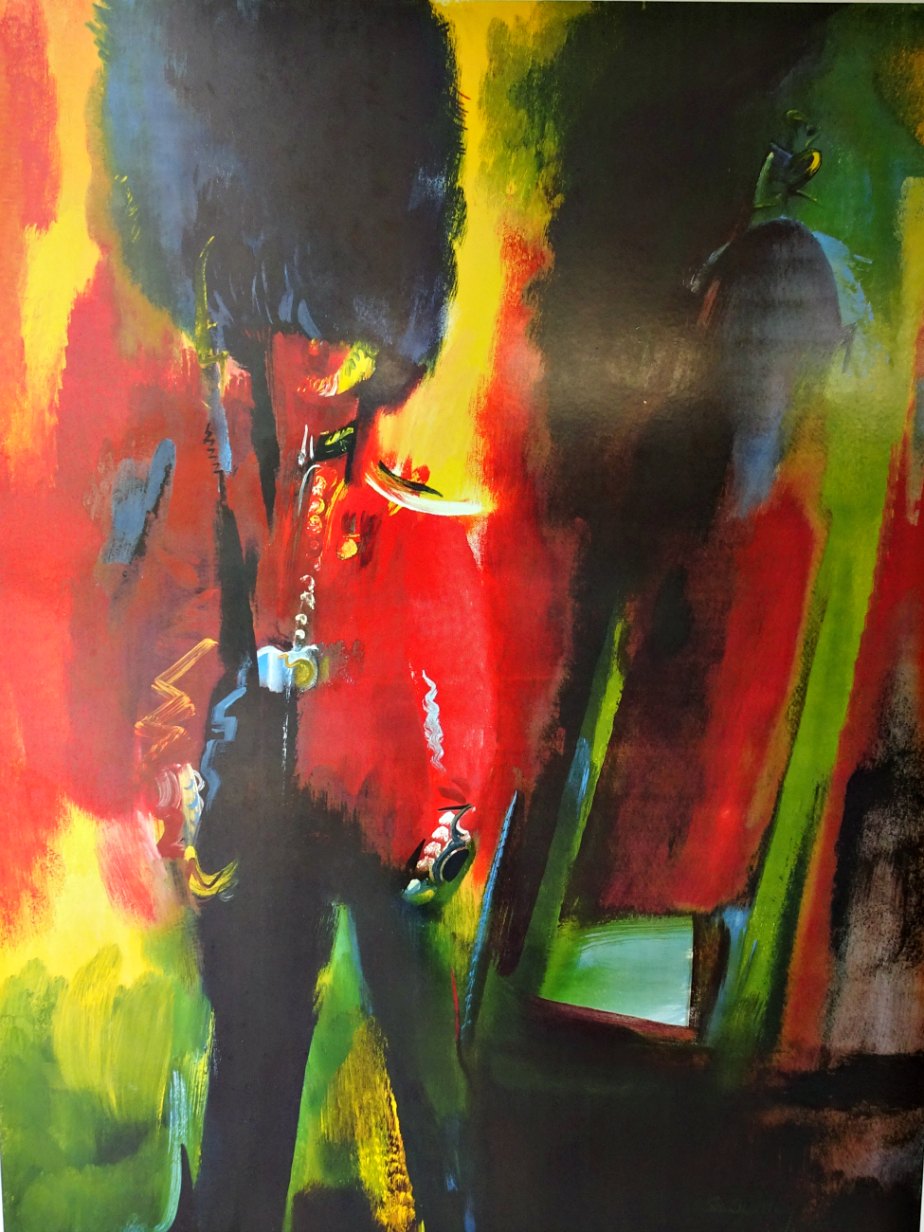 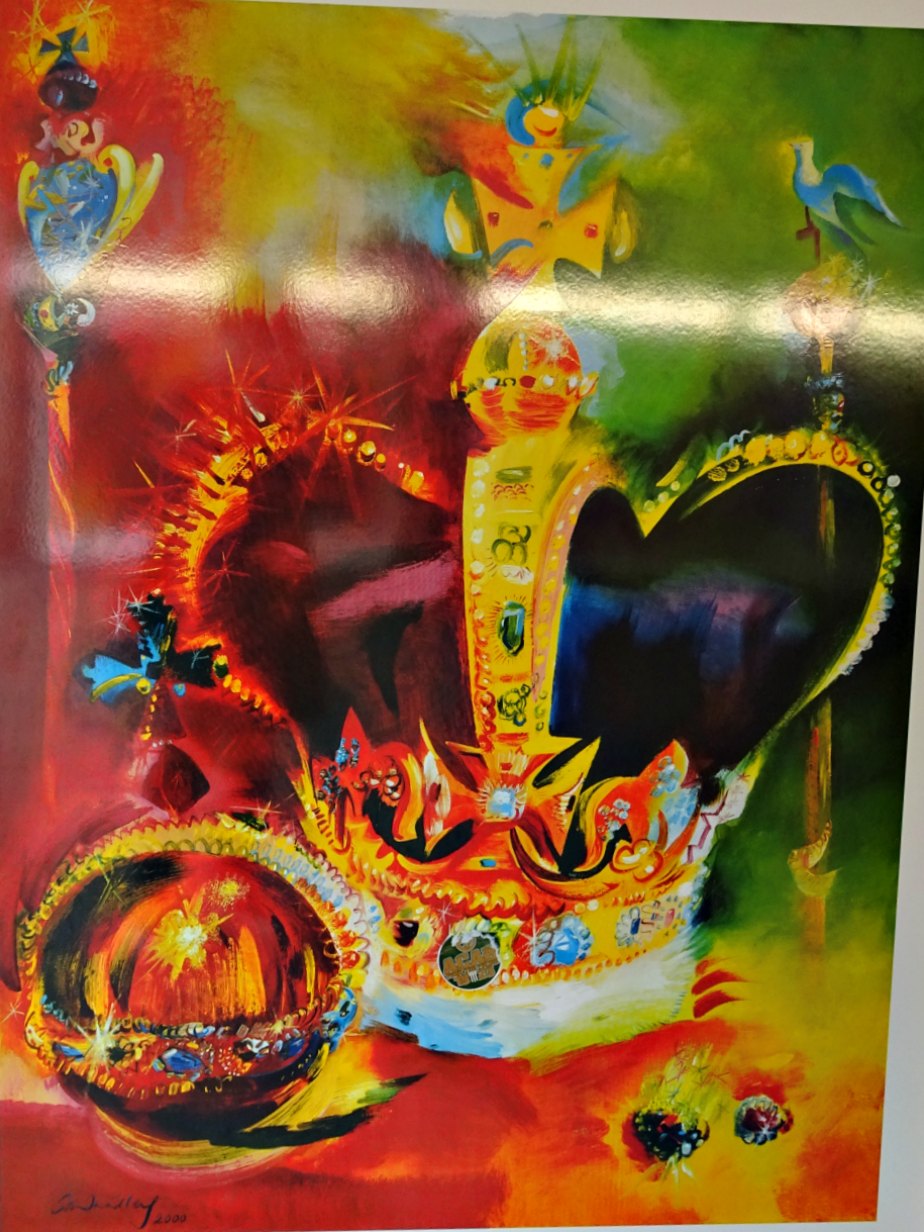 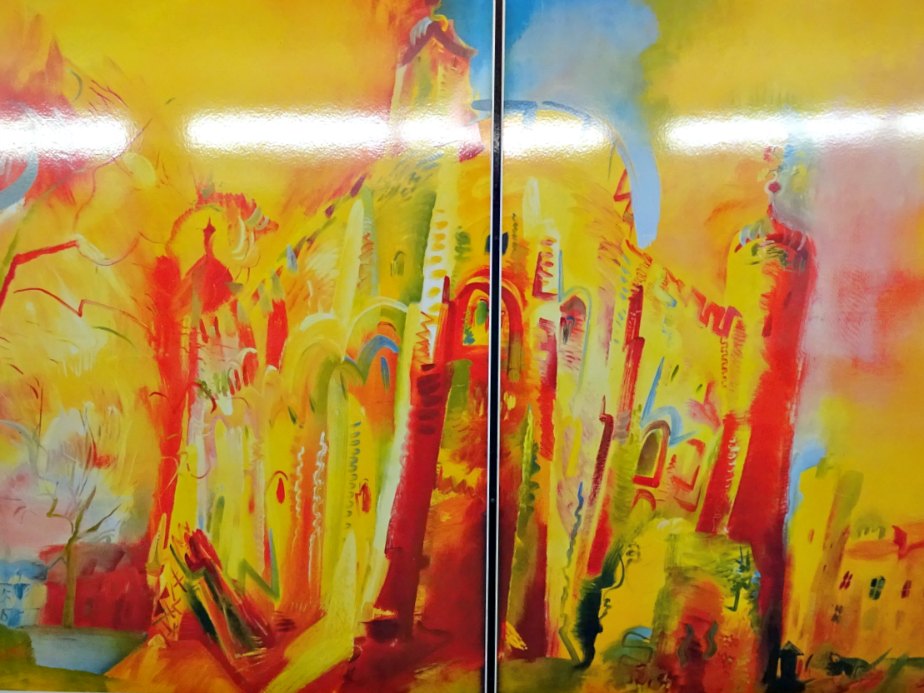 Sundial on the Wall 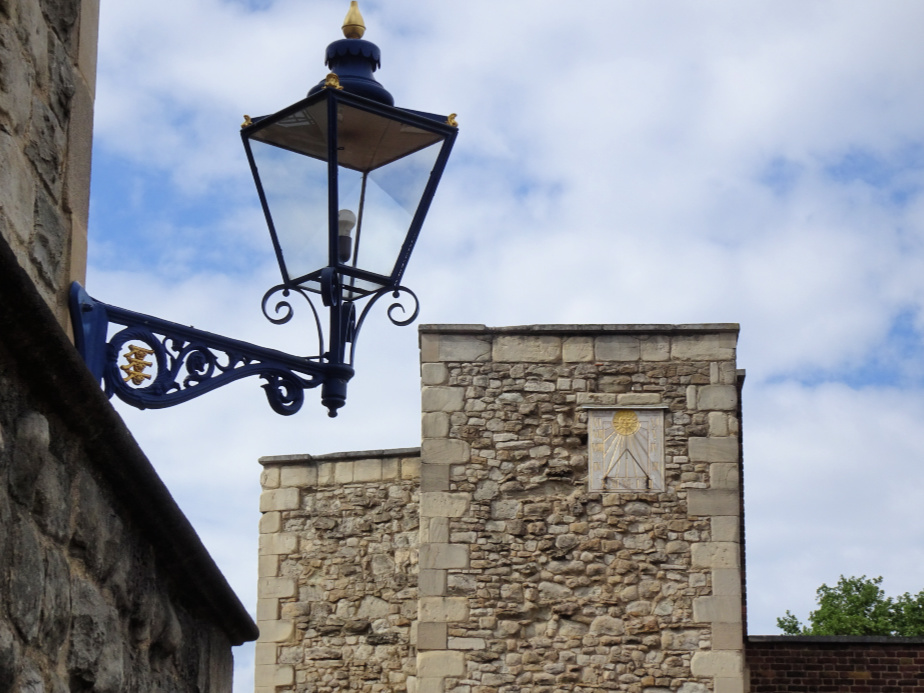 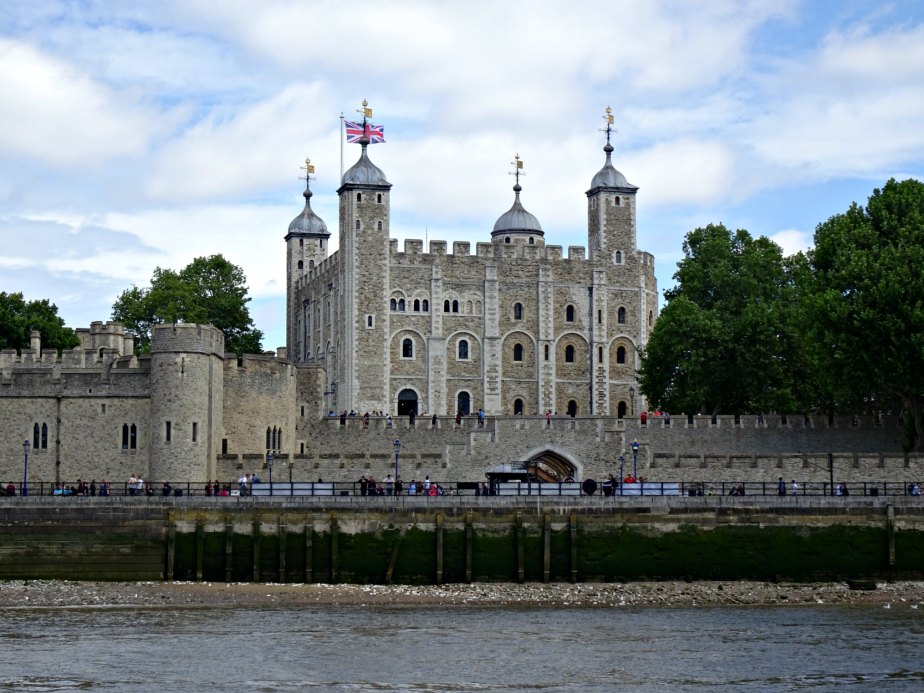 Tower Bridge from the Tower 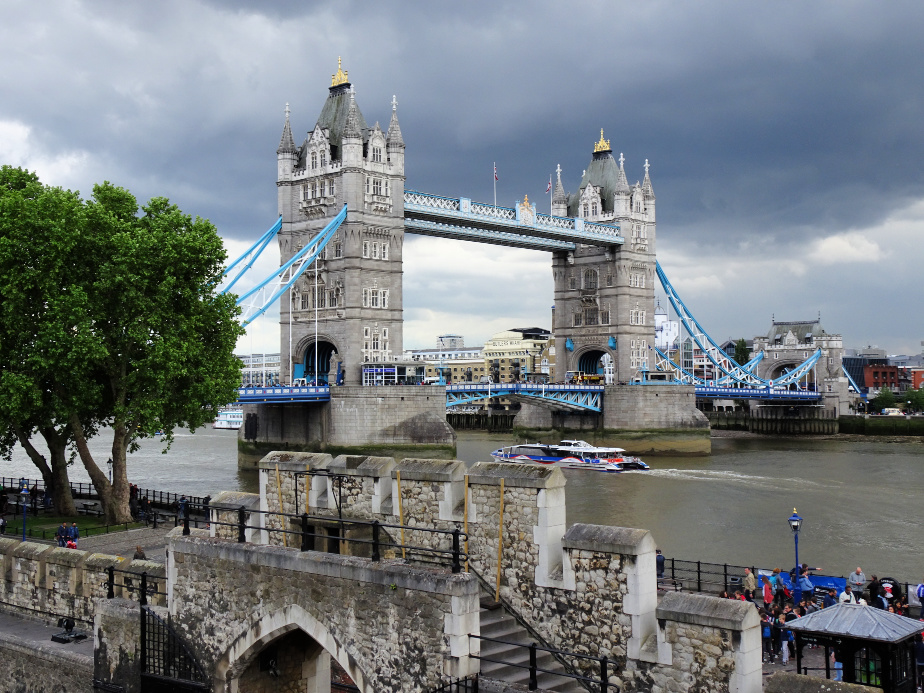 Look for the meeting point for the Yeoman Warders Tours, we used to call these guys Beefeaters, no one knows exactly why – maybe they ate the beef??? Now they prefer to be called Yeoman Warders, except on their birthday when, I have heard, they are presented with a bottle of Beefeater Gin. Once you join the group, these tours are free and run every 30 minutes, they start by telling stories of the history of the Tower.

Our Warder was telling a very interesting story about a few chaps called Simon, who were all beheaded at the tower. Simon Sudbury, Archbishop of Canterbury, it took a rather gruesome, eight blows to his neck to get the job done in 1381. Then there was Simon Fraser, the 11th Lord Lovat, he was the last person to be beheaded at the Tower, beheaded for treason in 1747 at the Tower. There were so many people who came to view this beheading that the viewing platform collapsed killing 20 of them! The story was just getting to the part where it doesn’t pay to be called Simon in England, which I found very amusing as I have a good friend in England called Simon……………when the tour was suddenly called off…………

Tour tip – Don’t put your umbrella up!! While the Warder was in full flight telling fantastic stories there were a few drops of rain, people started getting their umbrellas ready, then there were a few more drops of rain and a few of us (yes, I was one of them…) put our umbrellas up. Straight away the Warder called off the tour, saying he always does that as soon as umbrellas start going up…..so we were on our own now……..everything is fairly well signposted, so you know what you are looking at and there is plenty of information telling you all about each section of the Tower, but the Yeoman Warders do add that extra touch with very animated stories.

Queue to see the Crown Jewels

The queue to see the Crown Jewels continues....

The Yeoman Warders and their families live on site in rooms and houses in the walls of the Tower. They have their own pub, The Keys, which is not open to the public, only the Warders and their invited guests can go there. They have their own community within the Tower walls, but I believe some have houses elsewhere to go to, to get some time away from the never ending hordes of visitors to the Tower.

The queue to get in to see the Crown Jewels was huge, snaking around the queuing area and then going for a further 200 metres down the hill – nothing could make me join that queue. This is one of the advantages of becoming a member of the Historic Royal Palaces – members don’t pay to enter the Tower of London, so I decided to come back another day to see the Crown Jewels. But I can understand if you only have a one day ticket you want to make the most of it, maybe leave half your group in the queue while half goes off to see everything, then swap places……….or just forget it!! I went back the following week and there was no queue at all – the luck of the draw.

Baboons at the Tower

Polar Bear at the Tower

Elephant at the Tower

Memorial to the Beheaded

Don't Mess With Me

Patrol of the Baboons

St John’s Chapel on the 3rd floor of the White Tower, is the oldest surviving chapel of the Norman era and they still hold services there on Sunday mornings. Henry lll had the Chapel redecorated in 1240 with the addition of stained glass windows. The Knights of Bath held an all-night vigil in the Chapel on the eve of Henry lV’s coronation, and this ceremony continued to be held until 1559 for the coronation of Elizabeth l.

There are various art installations around the Tower grounds. The Historic Royal Palaces commissioned artist, Kendra Haste, to create wire sculptures to commemorate some of the many animals gifted to the Tower – lions, a polar bear, baboons, even an elephant. These exotic animals made up London’s first zoo, from the 1200s to the 1800s. Any surviving animals were moved to what is now London’s Zoo in Regent’s Park.

As you walk around the battlements you will come across metal sculptures of Guards defending the Tower with various weapons – not to mention a few actors dressed up ready to re-enact some of the goings on at the Tower.

In 2006 a memorial to those who lost their heads at Tower Green was unveiled near the execution site, designed by British artist, Brian Catling, a circular piece of glass with a glass pillow in the centre. A peaceful place to reflect on what a brutal society we once were……..

An Actor on the Tower Battlements

More Actors with the Queue to the Crown Jewels Behind Them

Inside the Tower Armoury

Tower Dragon at The Armoury

The Armoury in the White Tower houses a gleaming display of armour and weaponry. It seemed quite a laborious task to get both man and horse were kitted out for battle. There is an enormous dragon sculpture there made from all manner of bits and pieces from the armoury, shields, helmets, guns, ammunition, etc.

When you have had enough of the torture and violence, head over to St Thomas’s Tower and see the far more relaxing recreation of Edward l’s bedchamber.

Last, but by no means least – The jet black ravens that live at the Tower are, according to legend, holding the whole thing together. The legend being that if the ravens every leave the Tower and the Kingdom will fall, so by Royal Decree there must be a minimum of six ravens on site, but the Raven Keeper does have a few extras, just in case! Seems to be working, so far……

While in London you might like to visit the beautiful Kew Gardens, take a walk from Camden Town along Regent’s Canal, or if you are in London at the right time of year, visiting the Chelsea Flower Show is very inspirational, even for a non-gardener like me!

The Keys, The Yeoman Warder's Pub at The Tower

Book a tour on your Trip Over to London

Itinerary for my Trip Over to London

Flew from Sydney to London Heathrow via Singapore, with Qantas on QF1, then QF2 to come home.

Stayed at the Royal Overseas League in St James’s.

Picked up at Heathrow by Naz from Black Lane Limos.

As part of Vivid Sydney, this is the light show on Customs House in Circular Quay. It was a bitterly cold night so the crowds were down - perfect!!🥂
.
.
.
.
#vividsydney2022 #vividsydney #vivid2022 #lightshow #customshouse #sydney #sydneycbd #beachscene #yellowlight #coldnightinsydney #lightupmylife #lights #outonthetown #seeeverythingandevenmore ...