Trip Over to Florence

Our day out in Florence was inspired by David, Florence’s favourite son – Or is Michelangelo her favourite? I’m not really sure. Michelangelo wasn’t actually from Florence, or Firenze, as it is known in Italy. He was born in 1475 in Caprese, about 100km away. But David, on the other hand, was created in Florence by Michelangelo between 1501 and 1504 – so I’m going to stick with David being the favourite son.

Michelangelo was originally commissioned to create one of a series of statues of prophets to be positioned along the roofline of the east end of Florence Cathedral, (also known as Cattedrale di Santa Maria del Fiore, Il Duomo di Firenze or simply the Duomo). But David was placed instead in a public square, outside the Palazzo Vecchio, the seat of civic government in Florence, in the Piazza della Signoria where he was unveiled on September 8, 1504. He was placed with his eyes looking in the direction of Rome, with a warning glare. I actually think his stare, (and stance), is a very cool look of, “Don’t even think about it, I’ve got this…………..” 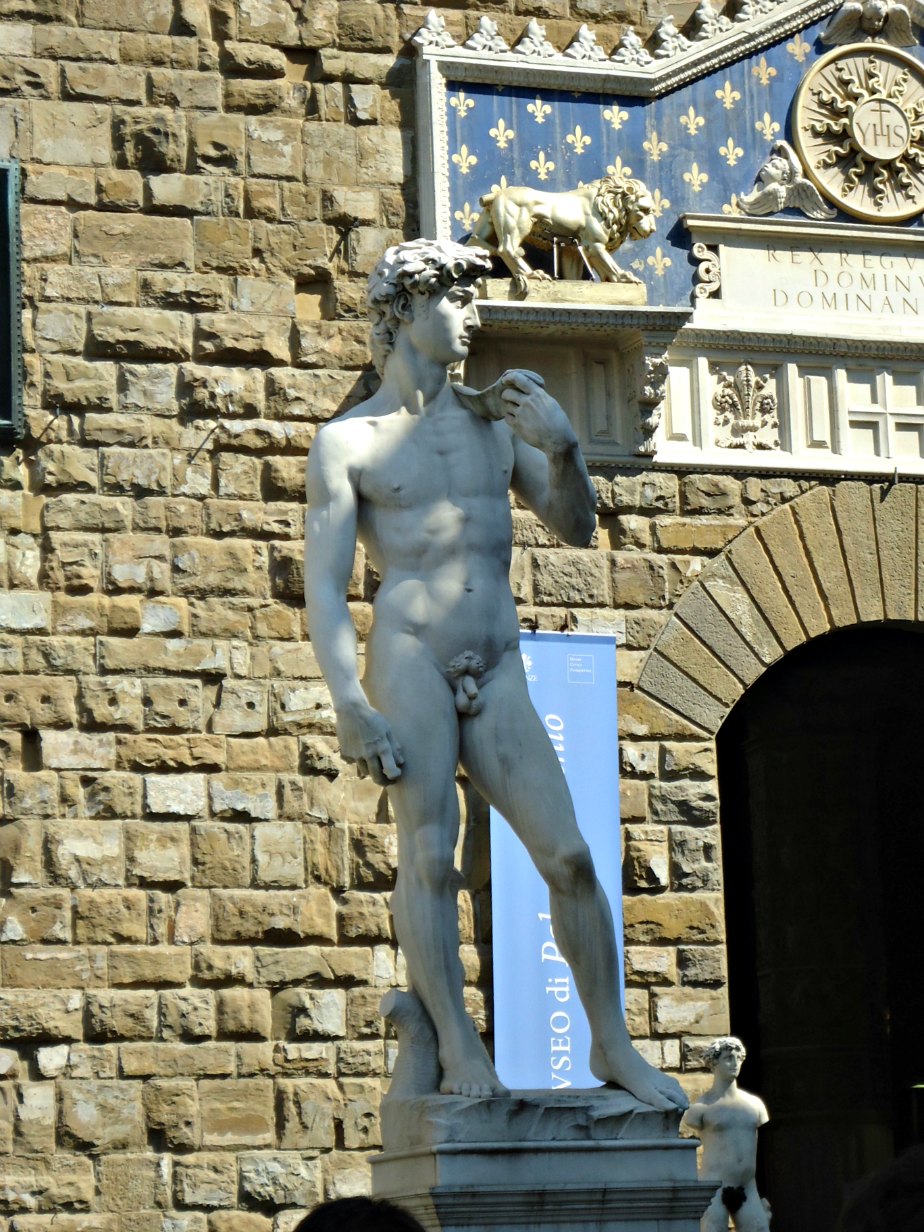 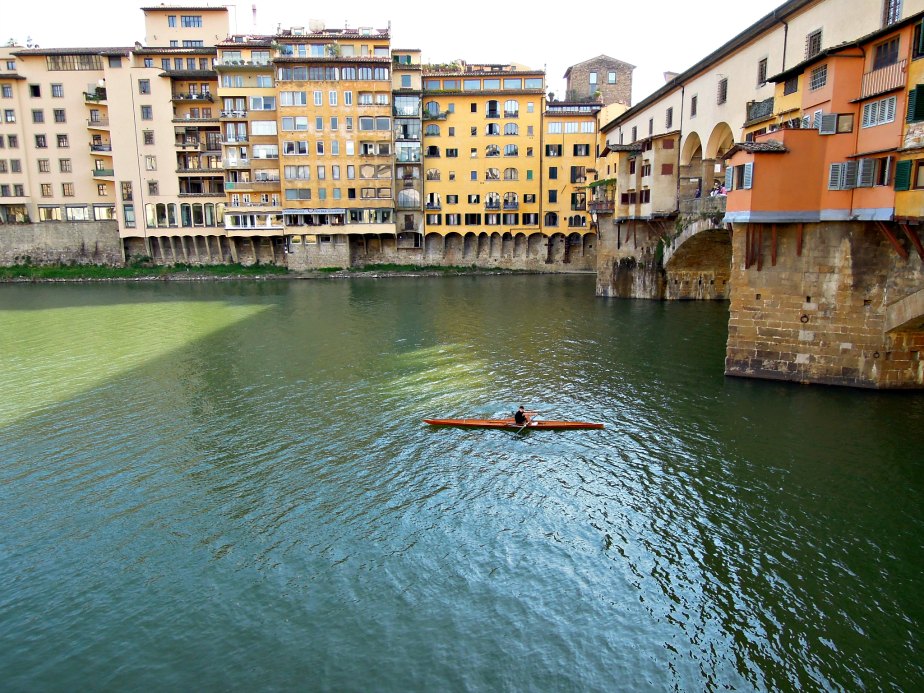 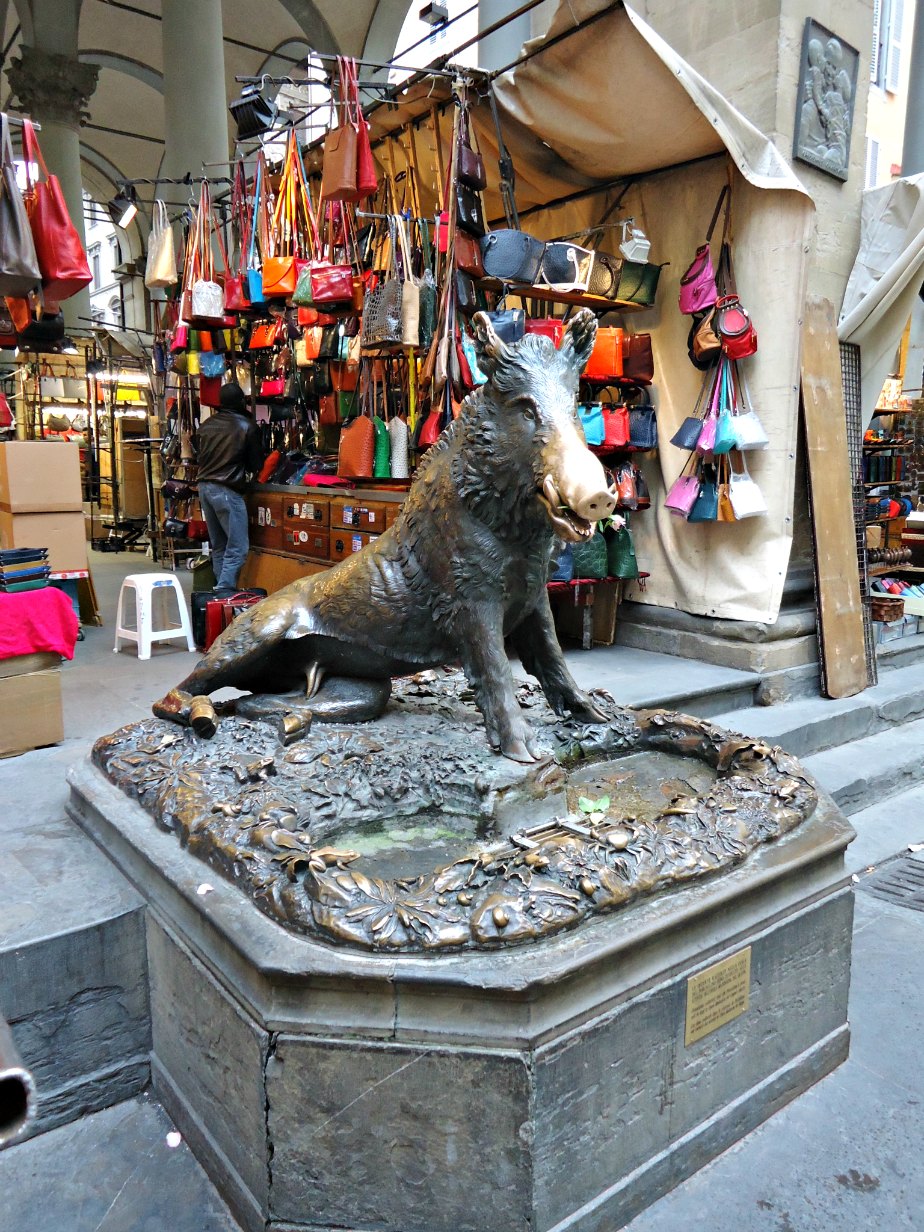 Path Up to Piazzale Michelangelo 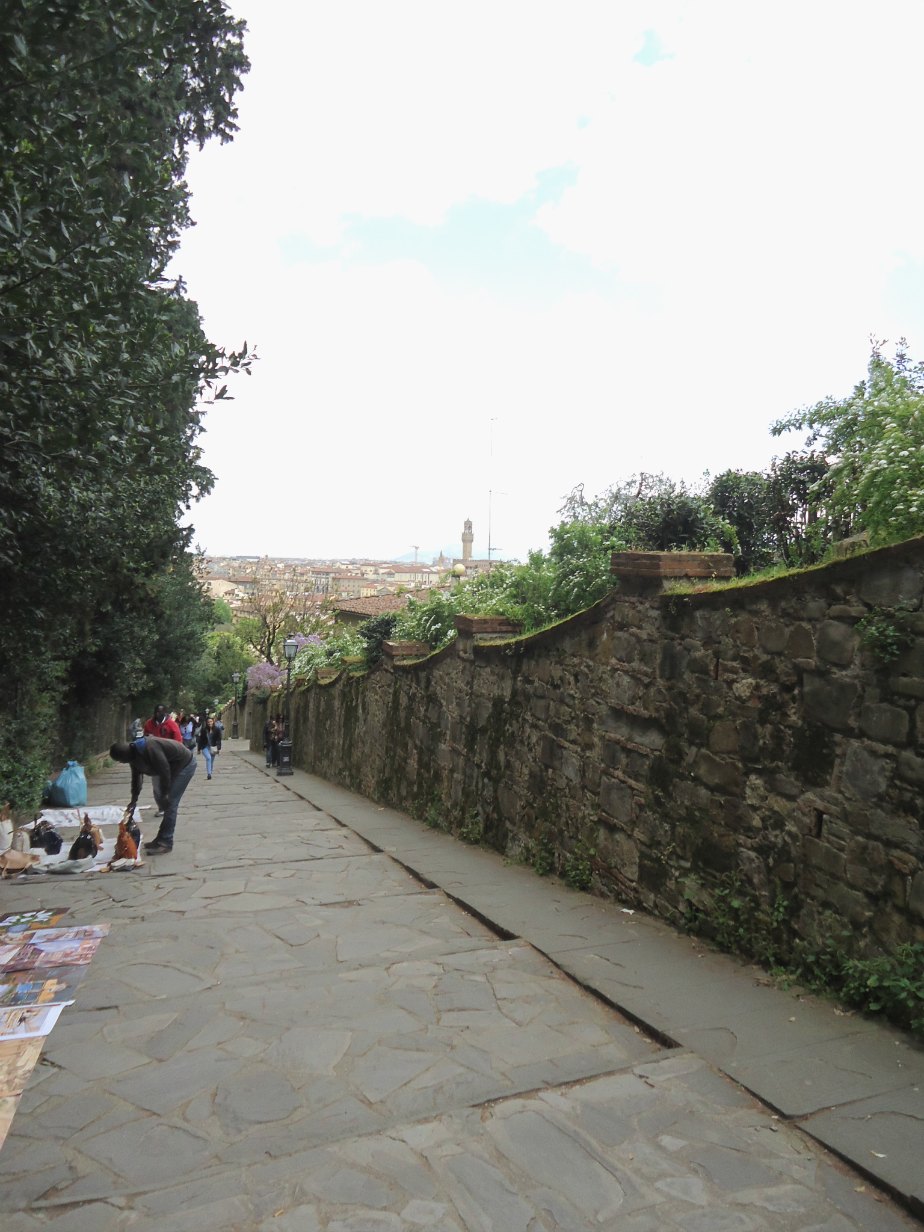 Uffizi Gallery Across the Arno 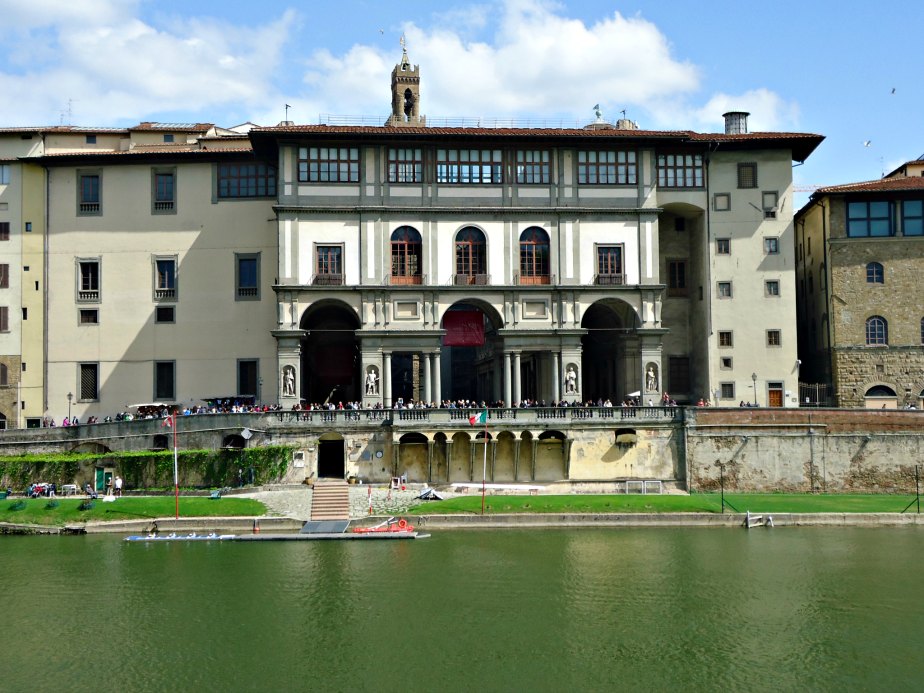 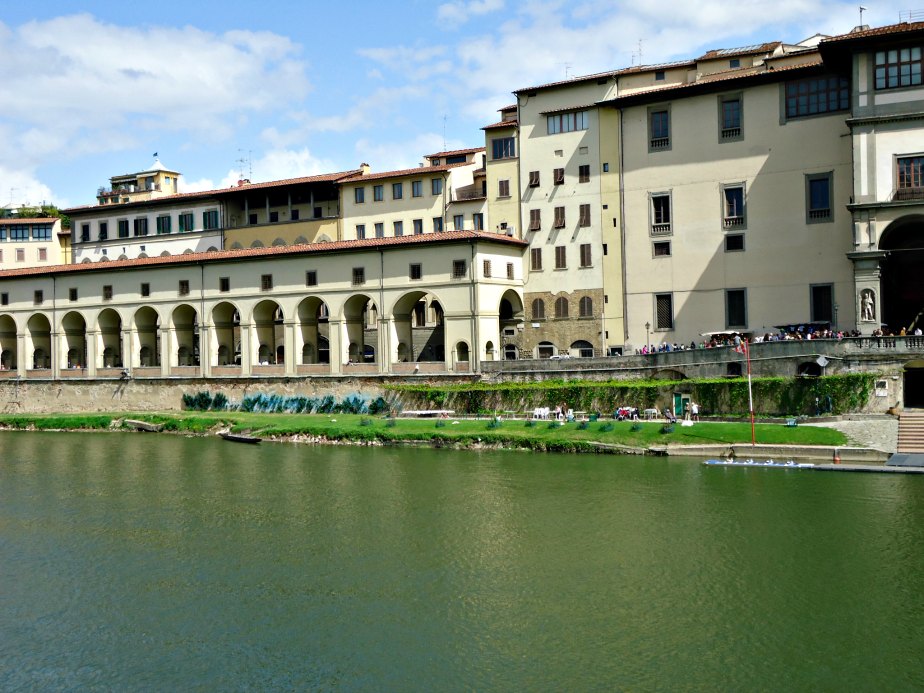 In 1873 the decision was made to move David inside, out of the weather, to the Galleria dell’Accademia, I did go there to see the original, but wasn’t allowed to take photos there. I have noticed online that many others have, but they were very strict the day I was there. The original is huge, just over 5mt tall. He is heavily guarded these days to protect him from further attacks, like the one in 1991 when someone took to him with a hammer, damaging the toes on his left foot. He does suffer from a few hair line fractures possibly caused by movement in the ground he stands on. He holds most of his weight on his right foot throwing off his centre of gravity. Maybe someone needs to create something for him to stand on that absorbs the natural movement and vibrations in the earth, after all, he is getting on a bit.

A replica was placed where the original stood in Piazza della Signoria, apparently the same size, but doesn’t seem to be, maybe because of the vast space he stands in as opposed to the original with a roof over his head. I have tried to find out who created this replica, but have been unable to. Maybe that was part of the deal, remain anonymous or you don’t get paid. From where I am standing, anyone who can create a replica of David from a chunk of marble is a very talented individual (or team) indeed. In fact, anyone who can pour something into a mould, get it out, stand it up, and it looks like David also has skills beyond anything I’ll ever have.

Having left the comfort of the Savoy Hotel in Piazza della Repubblica, after breakfast, we walked up Via Calimala to the Mercato Nuovo to see Il Porcellino, the bronze pig. Again, a replica of the original marble boar created by Pietro Tacca in the early 1600s. Rubbing the boar’s snout ensures that one day you will return to Florence (and keeps it polished to a high sheen!)

Taking a detour via the Piazza della Signoria, to see (replica) David, and up past the Uffizi Gallery we arrived at the River Arno and walked through the arches under the Vasari Passage and across the Ponte Vecchio. Turning left we walked along the river until we got to the path to climb up toward Piazzale Michelangelo up on the hill on the south side of the river. From there you have amazing views over Florence and beyond to the surrounding hills. 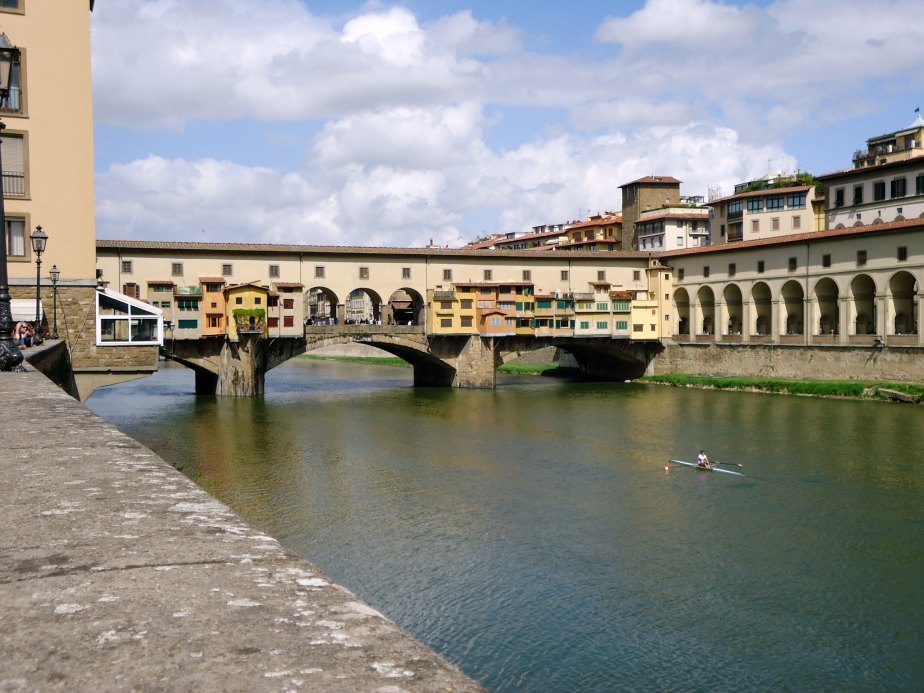 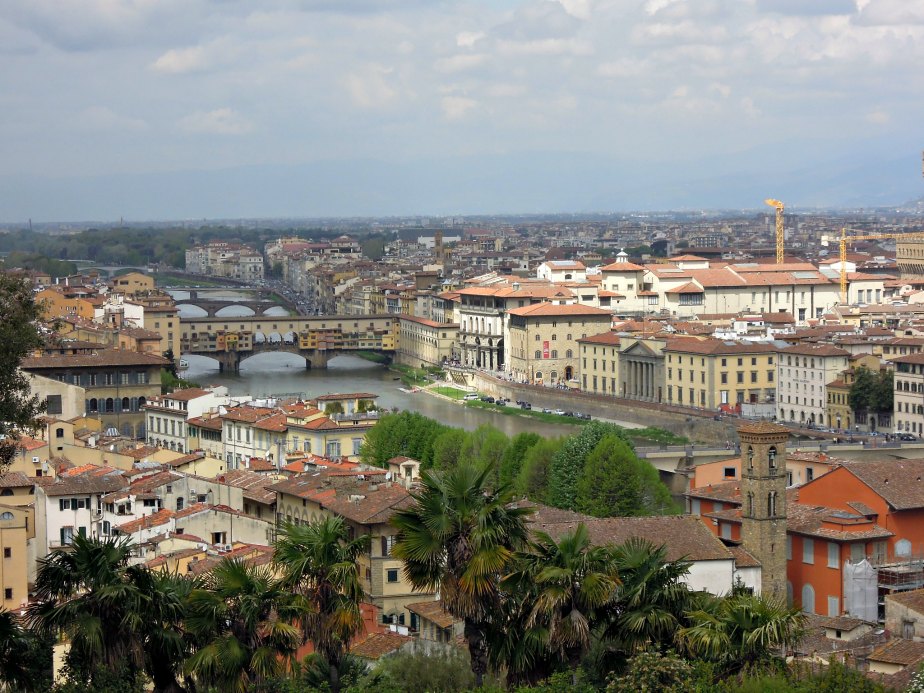 Palazzo Vecchio Tower and the Uffizi down on the River Arno 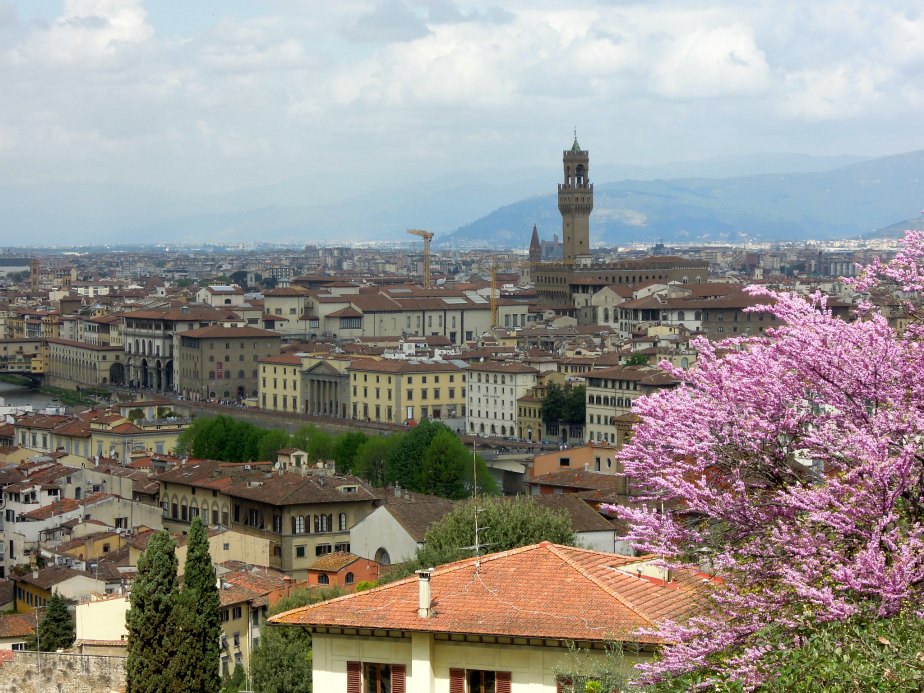 Palazzo Vecchio Tower and the Duomo

As we climbed up the path way, we stopped a few times to take photos (really, to catch our breath…) It was amazing to be looking over the rooftops of Florence and seeing the Tower at the Palazzo Vecchio rising up into the sky. Further away was the imposing dome and tower of the Duomo, and around to the east, the Torre della Zecca left rather unceremoniously as a traffic island after its past as a major lookout tower on the old city walls protecting the nearby bridge across the Arno. The Tower of Saint Nicholas still stands there proudly, it was also part of the cities defensive walls, originally built in 1324, having survived the 19th century destruction of most of the walls to make way for the urbanisation of Florence, you can climb its 160 steps for a view over the city. Fortunately we were very happy with the views we had from the path leading to the top of the hill.

Along the way there are little make-shift market stalls selling “designer” handbags, and various souveniers, most involving David. On bags, on cushions, as key rings, you name it, you can get it with a little David on it.

There were many people on the path stopping to ask us to sign petitions for various things, mainly to prevent drug problems. How my signature would help this situation is beyond me. Always just decline this, and move on. They are all pick-pockets, once you have both hands busy holding the clip-board and the pen, writing your name, address and email address, they will be checking your bag and pockets. They will tell you that they are in Florence studying art and this is their holiday job, or that they are volunteers to the cause – they are lying to you, don’t let their perfect English and passionate description of what they are doing fool you, all they want is your wallet. Some of the time it must work, or they wouldn’t do it – please don’t let it be you.

Looking Out from La Loggia

The sight of the magnificent neo-classical Loggia dominating the Piazzale Michelangelo made it all worthwhile. It was originally built in the late 1800s, the architect’s dream was that it was to house a collection of Michelangelo’s works, but that didn’t happen – sadly, not all dreams can come true. It is now a fabulous restaurant where we enjoyed lunch at a table in one of the arches, eating beautiful meals, drinking nice Tuscan wine, while looking over the gardens, the activity in the square and out over Florence.

There is a bronze (replica) David in the Piazzale, also by an unnamed artist. We had our lunch while David was surrounded by Ferraris, and he wasn’t the slightest bit interested. It seemed there was some sort of Ferrari promotion going on that day, people were taking them for test drives on the winding roads in the area.

After lunch, and some time taking in the view and looking at the Ferraris, it was time to head back down to Florence. At the start of the path there is a fantastic view of a remaining stretch of the ancient walls that once surrounded Florence. We walked through Porta San Miniato, the gate in the wall as we got closer to the river, it has been there since the 1300s and the locals live around it and walk through on a daily basis more than 600 years later. I have a complete fascination for places that so many people have walked through for hundreds of years, and now I am doing it – for some unknown reason, it really impresses me.

After the test drive, deal time!

From our Table at La Loggia

David and the Ferraris

It was pointed out by a tour guide, an art student, when we went to see the real David, that his right hand is out of proportion as compared to the size of his head. She explained that this was part of Michelangelo’s genius, as David was originally commissioned to stand high up on the eastern end of the Duomo. See in the photo below on the right there is a sort of balcony looking area – the plan was that David and some others were going to stand in these areas around that end of the Duomo. The art student explained that Michelangelo did this on purpose, making the hand bigger, so then when you looked up at David so high above you, everything looked in proportion. But, the flaw in this is that if that was the case, it should have been the other way around, the head should have been bigger and the hand smaller. So it’s probably best if we just don’t go there, and I wish she hadn’t mentioned it because all I see now is a big right hand, which I hadn’t thought of as out of proportion before. But Michelangelo is still a genius, it was a huge block of marble to start with, and he turned it into a man – that in itself is an act of genius.

Anyway, Michelangelo’s studio, now a museum, is just behind the Duomo, and once David was finished they very quickly realised they had no way to lift this giant naked man with the rippling six pack, weighing more than 6 tons, up into the position reserved for him. So after much deliberation from a committee that included Leonardo da Vinci, it was decided that David should stand at the entrance to Palazzo Vecchio, in Piazza della Signoria, which he did from 1508 until he was moved inside the Galleria dell’Accademia in 1873.

Via di Belvedere Outside the Ancient Walls

Book a tour on your Trip Over to Florence

Itinerary for Trip Over to Florence

Flew from Sydney to Rome via Dubai, with Qantas/Emirates.

Stayed in an apartment near Largo di Argentina for a month – rented through Sleep in Italy.

Walked all over Rome, bought a one month transport ticket for buses, the metro and some trains.

We caught the fast train from Rome Termini to Florence, and stayed for 3 nights at the Hotel Savoy.

While in Florence we went on a tour with Viator to Siena and San Gimignano.

Arranged for us to be picked up at the airport on arrival, and taken back at the end of our holiday with a private transfer with Viator.