The Spanish Steps in Rome

Trip Over to Rome

The Spanish Steps, or as they are known in Italian – Scalinata di Trinità dei Monti, are more than just Rome’s meeting point, they were built in 1725 to access the Trinità dei Monti Church that sits majestically perched at the top, as it has done since 1585, desperately in need of stairs to access it for nearly 150 years. Known as Rome’s ‘meeting point’, they often get so crowded with people sitting all over them that you would never find who you are meeting. If someone says, “Meet me at the Spanish Steps”, you will need specifics, the top, the bottom, the middle, the left, the right, the centre, near the fountain, outside the Keats-Shelley Memorial House, outside Babington’s Tea Rooms……… 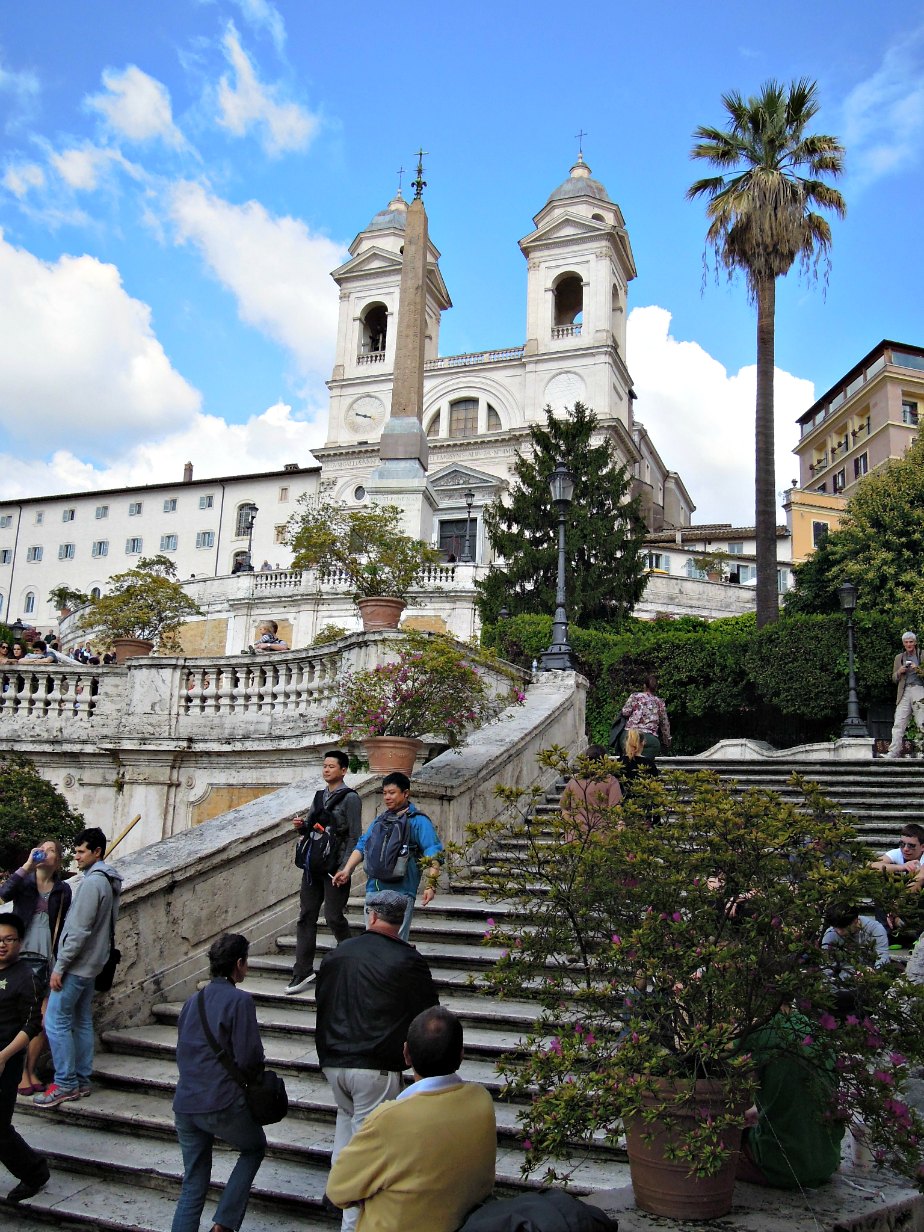 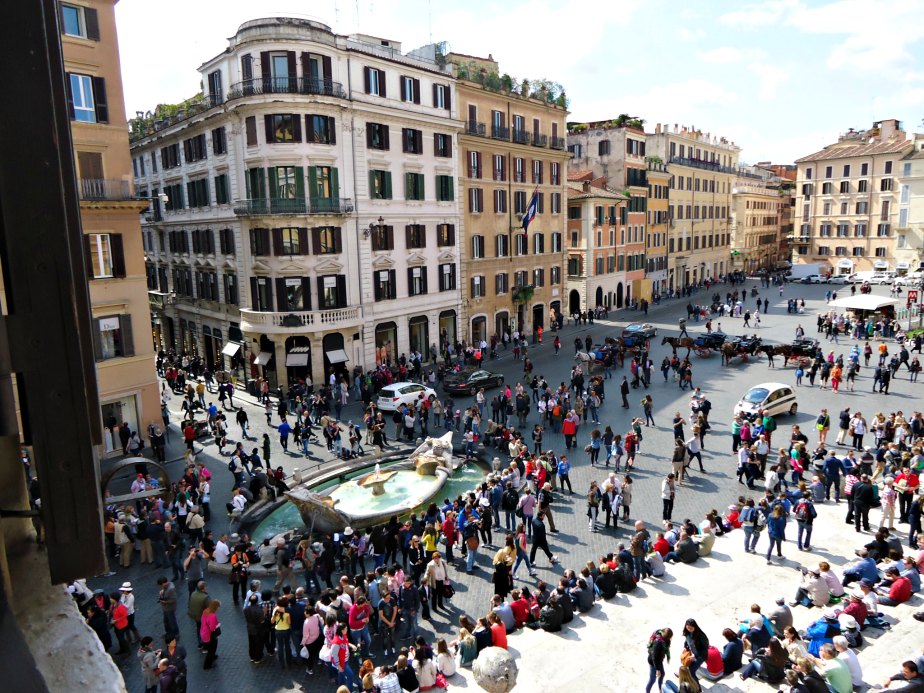 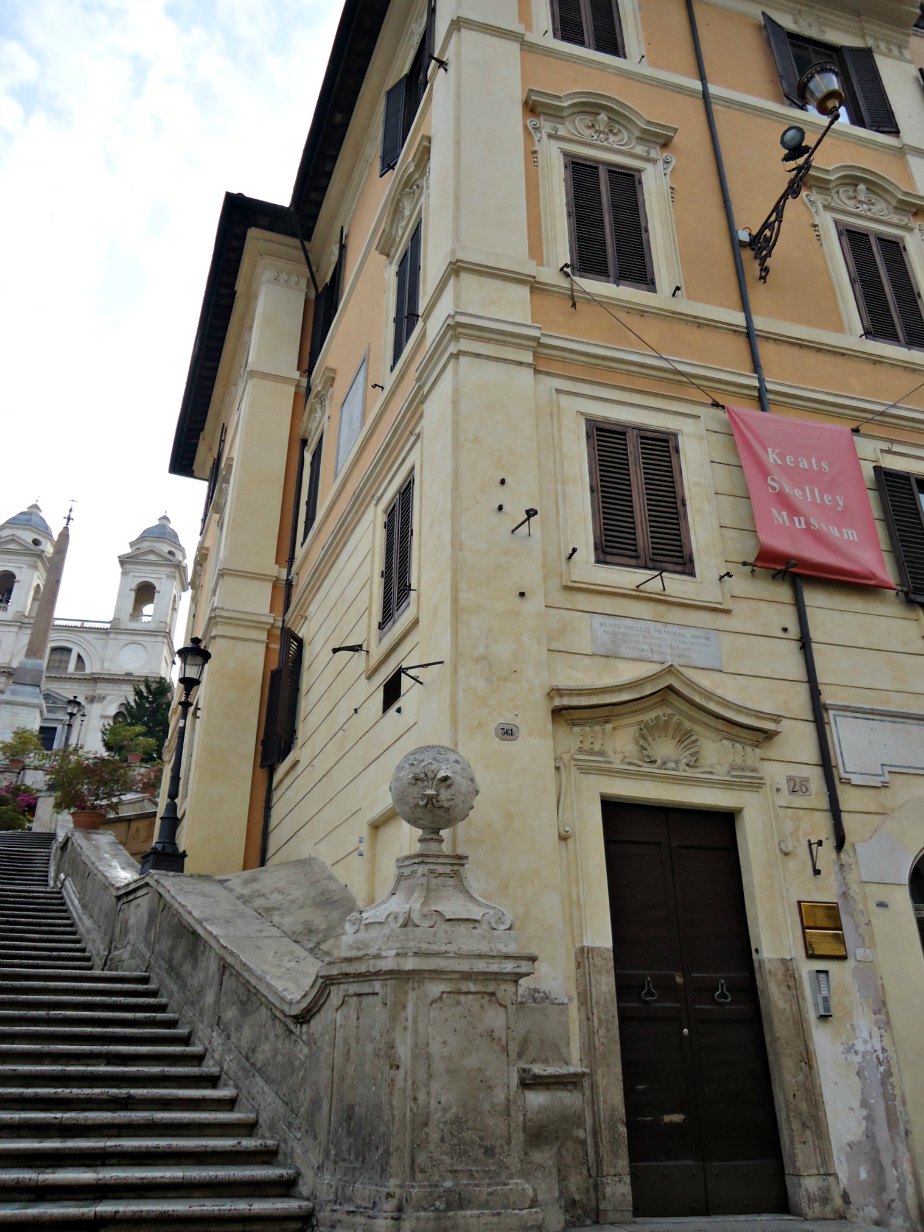 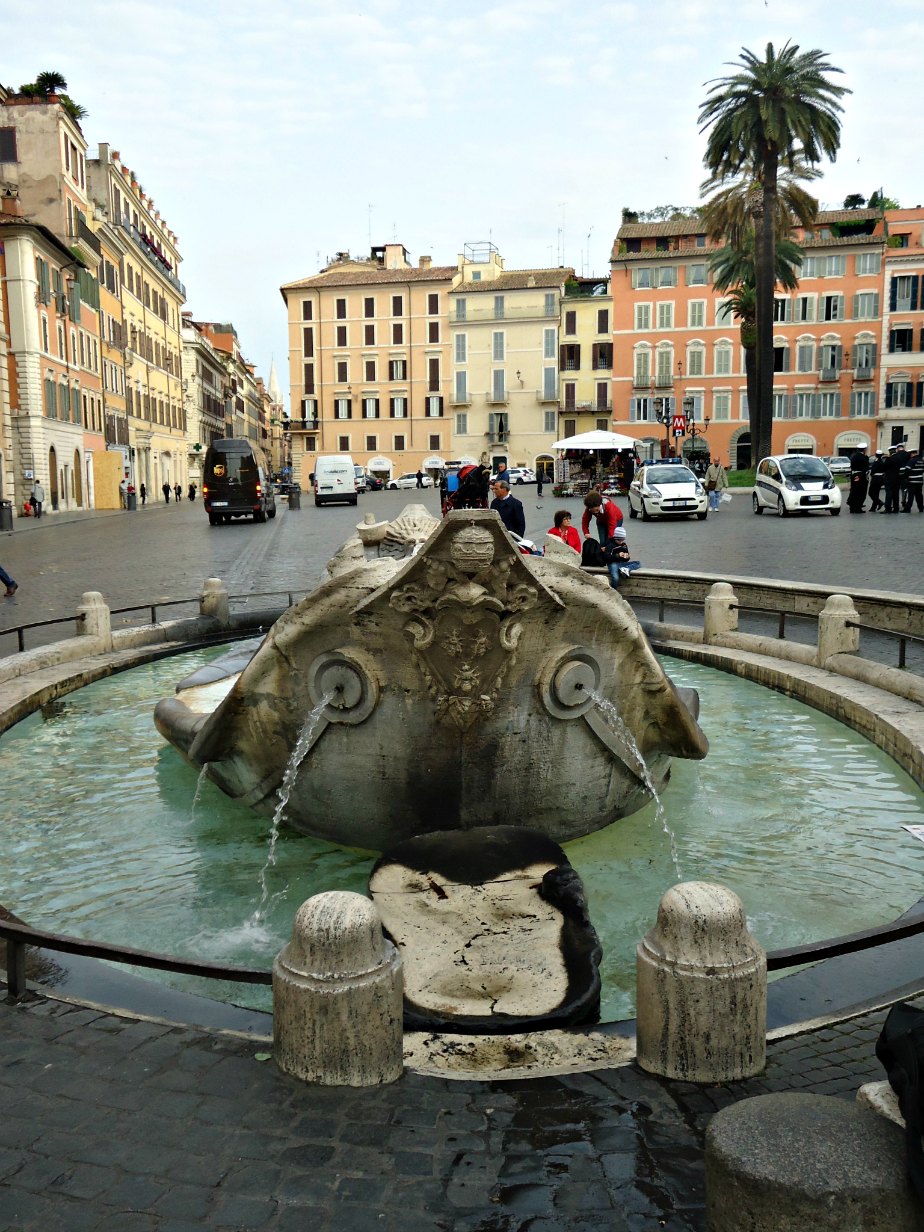 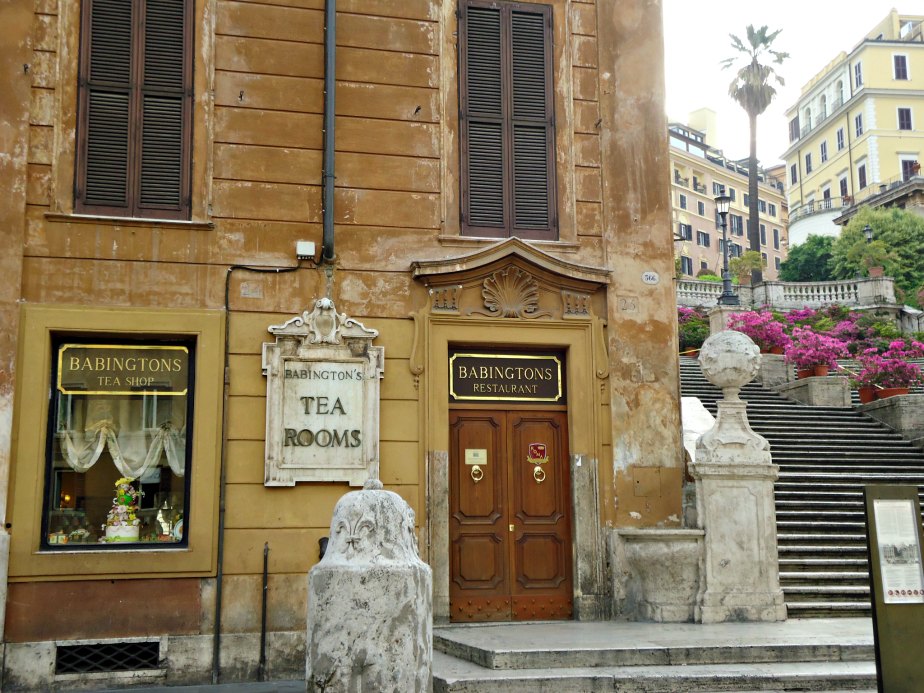 Crowds Sitting all Over the Spanish Steps 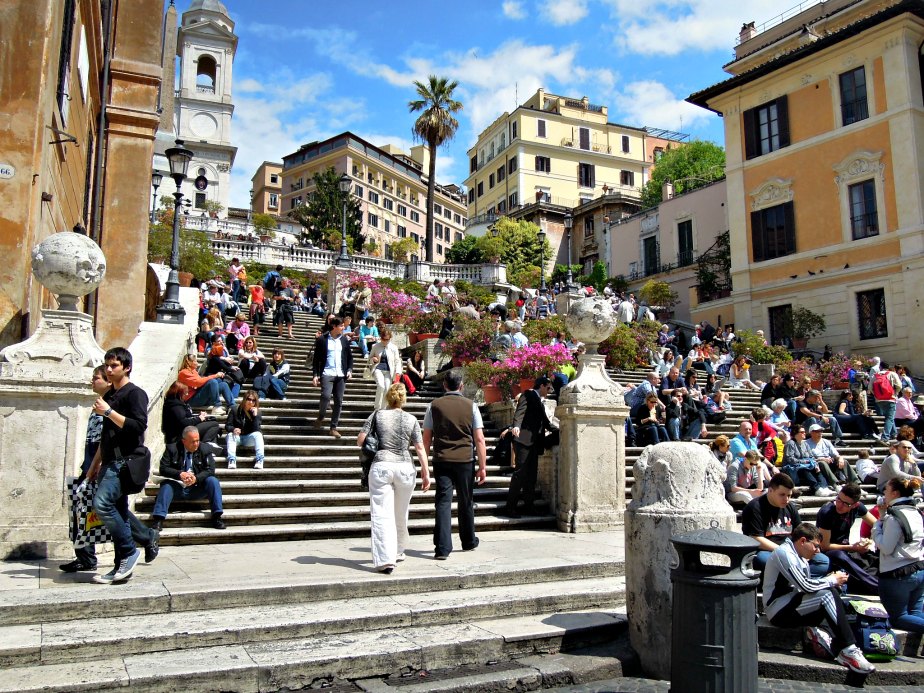 Recently the Bulgari Fashion House has put in the funds required to clean up and restore the Spanish Steps to their former glory, all the chips and cracks on the Travertine marble have been repaired, all the chewing gum, coffee and wine stains removed, and a good clean to get off centuries of grime. I am so proud of the fashion industry for funding the restoration of Italy’s monuments. Fendi – The Trevi Fountain, Tod’s – The Colosseum, Diesel – The Rialto Bridge in Venice, and now Bulgari – The Spanish Steps. Catch a glimpse of the fabulous opening show after the Spanish Steps restoration.

Fortunately, I have recently heard that Rome’s Police are starting to move people on if they sit all over the steps, and so they should. Even though the Spanish Steps are considered to be one of Rome’s monuments, they are a throroughfare for those wanting to get from top to bottom and vice versa to go about their business. Rome seems to attract the worst kind of tourist, people who think it is OK to sit all over monuments and statues eating and drinking, it isn’t. Unless there is a specific seat to sit on – don’t sit on it. Others want to access it, see it, admire it and take photos of it. You’ll have to get up early to get photos without so many people in them, but it is worth it. 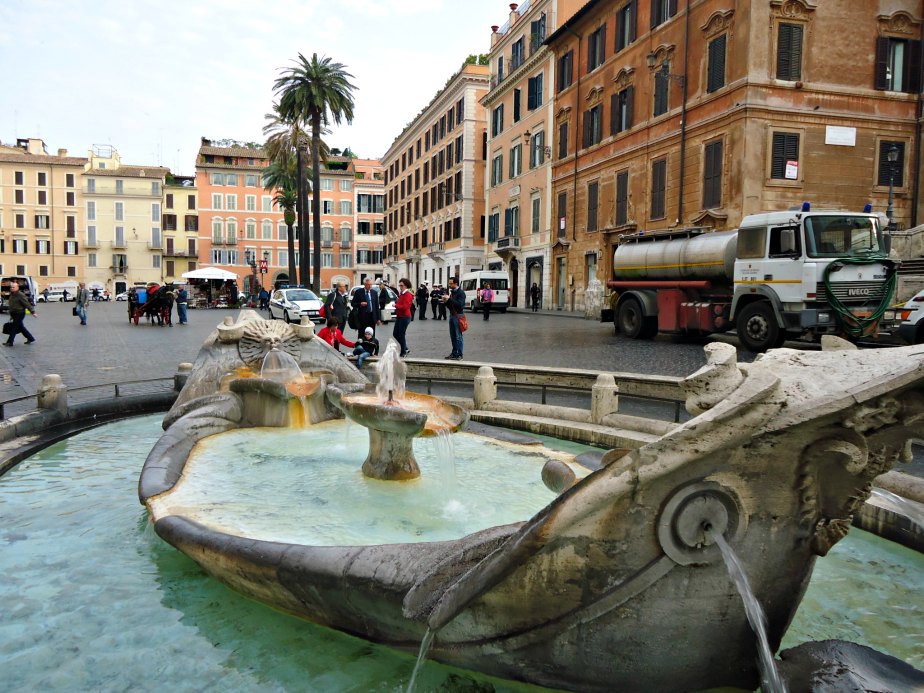 Azaleas on the Spanish Steps 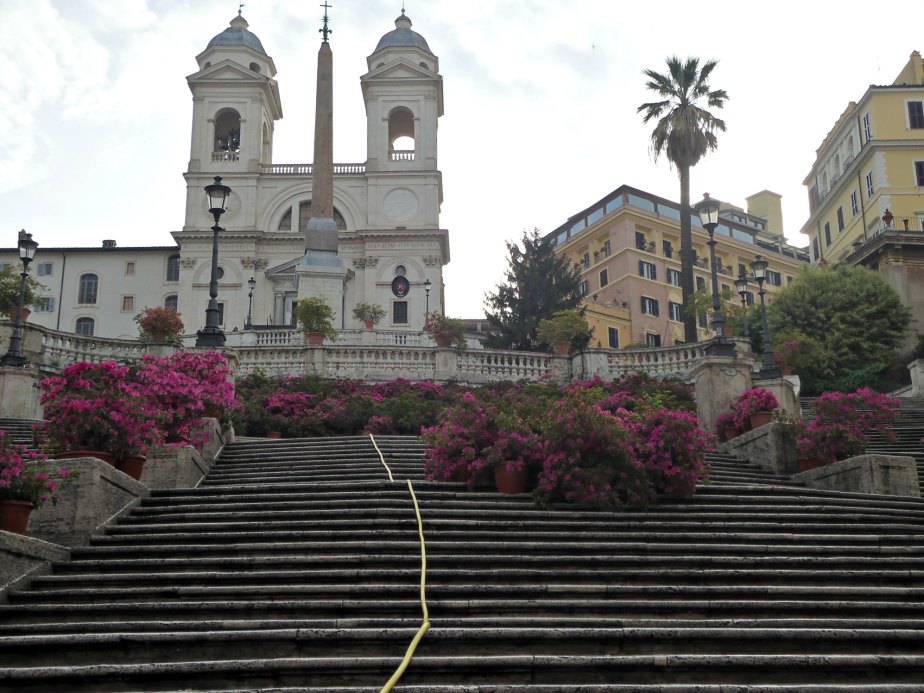 Fontana della Barcaccia in front of the Keats-Shelley Museum 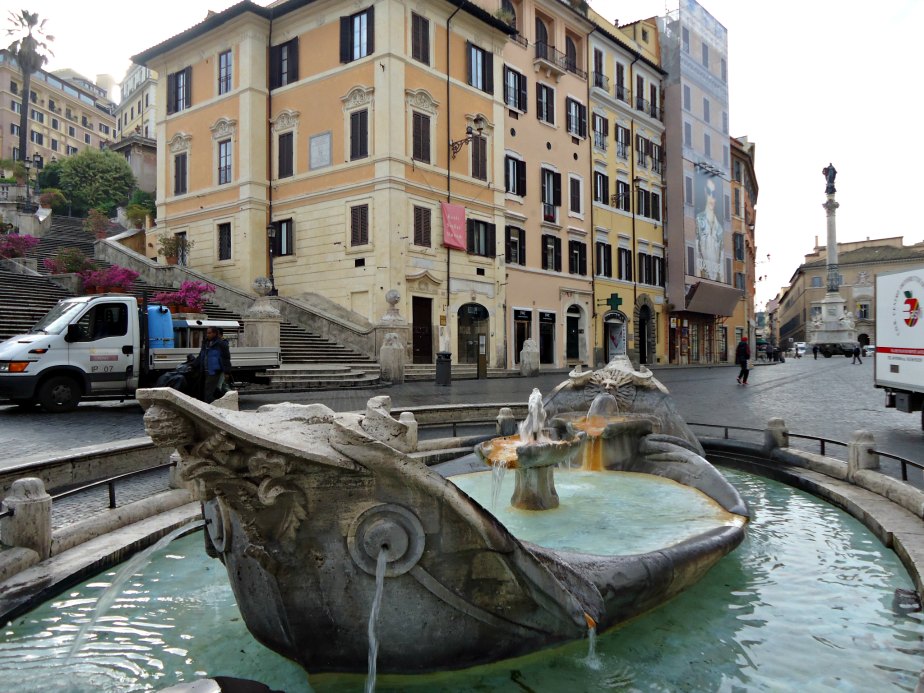 The fountain in Piazza di Spagna, Fontana della Barcaccia, is found at the foot of the Spanish Steps, commissioned in 1623 to be built as part of a prior Papal project to erect a fountain in every major piazza in Rome. The fountain was completed between 1627 and 1629 by Pietro Bernini possibly along with the help of his son Gian Lorenzo Bernini, as Pietro died on 29th August 1629.

The sculptural fountain is made into the shape of a half-sunken boat with water overflowing its sides into a small basin. The source of the water comes from an aqueduct from 19BC. Bernini built this fountain to be slightly below street level due to the low water pressure from the aqueduct. Fresh drinking water flows from seven points on the fountain. The ramp at the front of the fountain is there so you can walk out at get fresh drinking water from the spouts in the boat. Water is available like this from all over Rome.

According to legend, when the Tiber River flooded in 1598, water carried a small boat into the Piazza di Spagna. When the water receded, the boat was deposited in the centre of the square, and it was this event that inspired Bernini’s creation. The fountain is decorated with the Papal Coat of Arms of the Barberini family as a reminder of Pope Urban VIII’s ancestry.

Looking Out from Keats' House

Looking out from Keats' Bedroom Window

On one side of the bottom of the steps is Babington’s Tea Rooms, on the other is the house where romantic poet John Keats lived and died. It is now a memorial museum to both John Keats and Percy Shelley. Keats came to live in Rome on the advice of his doctors as he was suffering from tuberculosis, it was thought maybe the warmer weather in Rome would help. But not so, he needed more than the weather to cure him and he died in 1821 at the age of only 25. This fabulous address was bought in 1906 and restored to how it was in Keats day and opened as a museum to both Keats and Shelley. Very interesting to see how simply Keats lived, and see pictures of Rome from the early 1800s.

Babington’s Tea Rooms were opened in 1893, sadly long after Keats died so he never got the opportunity to take tea there, it may have helped. Two young English ladies, Isabel Cargill and Anna Maria Babington, moved to Rome with £100.00 to open Tea Rooms to cater for the growing English population of Rome. They opened business in what was the stables of an 18th century palazzo, having made a success of their first tea room not far from there. After Anna Maria’s death in 1929, her sister, Annie, invested her life savings into the business. WW1 and the great depression had taken their toll, but with this investment, Anna Maria’s daughter, Dorothy, along with Annie and Isabel were able to bring it back to a successful business.

The business was struck another blow in WW2, but with lots of hard work was again brought back to life and today is operated by Isabel’s great-grandchildren. Babington’s is a lovely place to spend some time before continuing to explore Rome.

The high fashion establishments are all in this area. Looking from the Spanish Steps you have a view straight down Via Condotti, great window shopping in this street. On the left corner of Via Condotti fronting on to Piazza di Spagna is Dior, on the right is Prada, with Missoni next door. Further to the right is Chanel and round to the left in Piazza Magnanelli is Valentino. All the way down Via Condotti, at the intersection of Via del Corso is the Head Quarters on Fendi, where I bought my beautiful silk scarf celebrating 75 years of The Bagette, Fendi’s signature handbag.

Via Condotti from the Spanish Steps

Fendi HQ on Via della Corso

Via Condotti from Fendi to the Spanish Steps

Book a tour on your Trip Over to Rome

Itinerary for Trip Over to Rome

Flew from Sydney to Rome via Dubai, with Qantas/Emirates.

Stayed in an apartment near Largo di Argentina for a month – rented through Sleep in Italy, now available on Airbnb.

Walked all over Rome, bought a one month transport ticket for buses, the metro and some trains.

We caught the fast train from Rome Termini to Florence, and stayed for 3 nights at the Hotel Savoy.

While in Florence we went on a tour with Viator to Siena and San Gimignano.

Arranged for us to be picked up at the airport on arrival, and taken back at the end of our holiday with a private transfer with Viator.

Between down pours, Tunks Psrk continued to fill with water. Lucky someone thought to put the "Ground Closed" sign in the middle of the cricket ground 🤣 I think anyone who turned up to play would have realised after wading through knee deep water on to the sodden grass that it wouldn't work out!😂
.
.
.
#tunkspark #floodedpark #waterwatereverywhere #greengrass #aftertgerain #walkinthepark #sydneyinspring #sydneylife #sydneyaustralia #myhometown #cricketground #toowettoplay #waterviews ...

At the eastern end of Pyrmont Bridge, one of the old sandstone pylons dwarfed by highrise towers now all around the Darling Harbour area.
.
.