Trip Over to New York

After a late and lazy start on a very cold New York morning – we walked down to the Corner Café at 6th Avenue and 23rd Street, bought some Smoked Salmon Bagels with Scallion Lox to go. Then wandered down 22nd Street to the Hudson River, from there we had leisurely walk all the way up the Riverside to the 42nd Street Pier where we bought tickets to go on the Circle Line 3 hour boat trip right around Manhattan Island, and sat down to eat our bagels before boarding.

Taking up our positions outside on the upper deck in seats at the back of the boat, it was absolutely freezing, but that was the best place for taking photos. There wasn’t a cloud in the sky, the wind chill certainly made us wonder what we were doing on a boat. Once we got going there were plenty of opportunities to run inside to warm up. My hat, gloves and scarf certainly earned their keep that day. 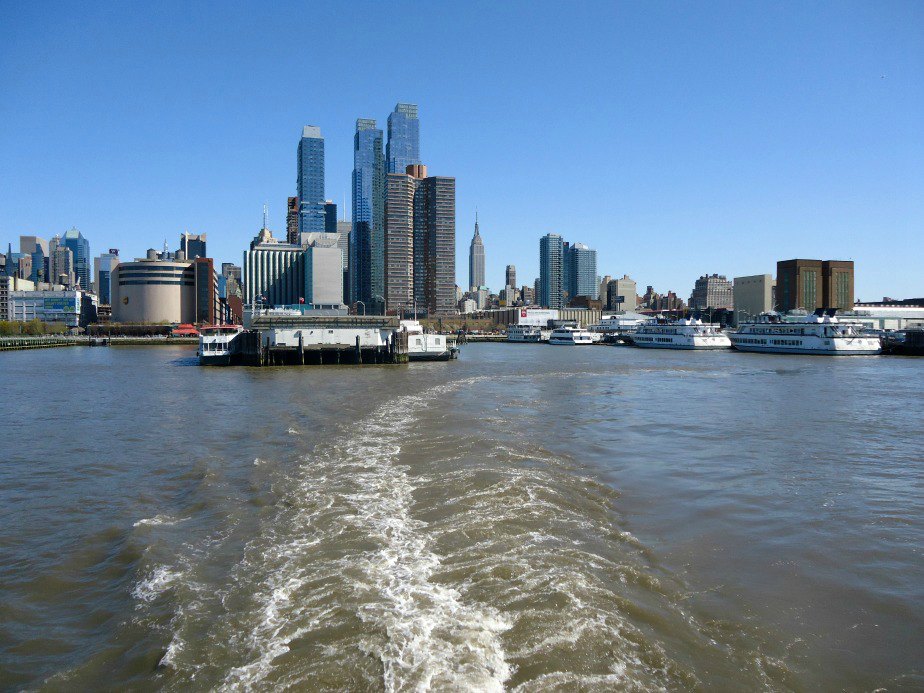 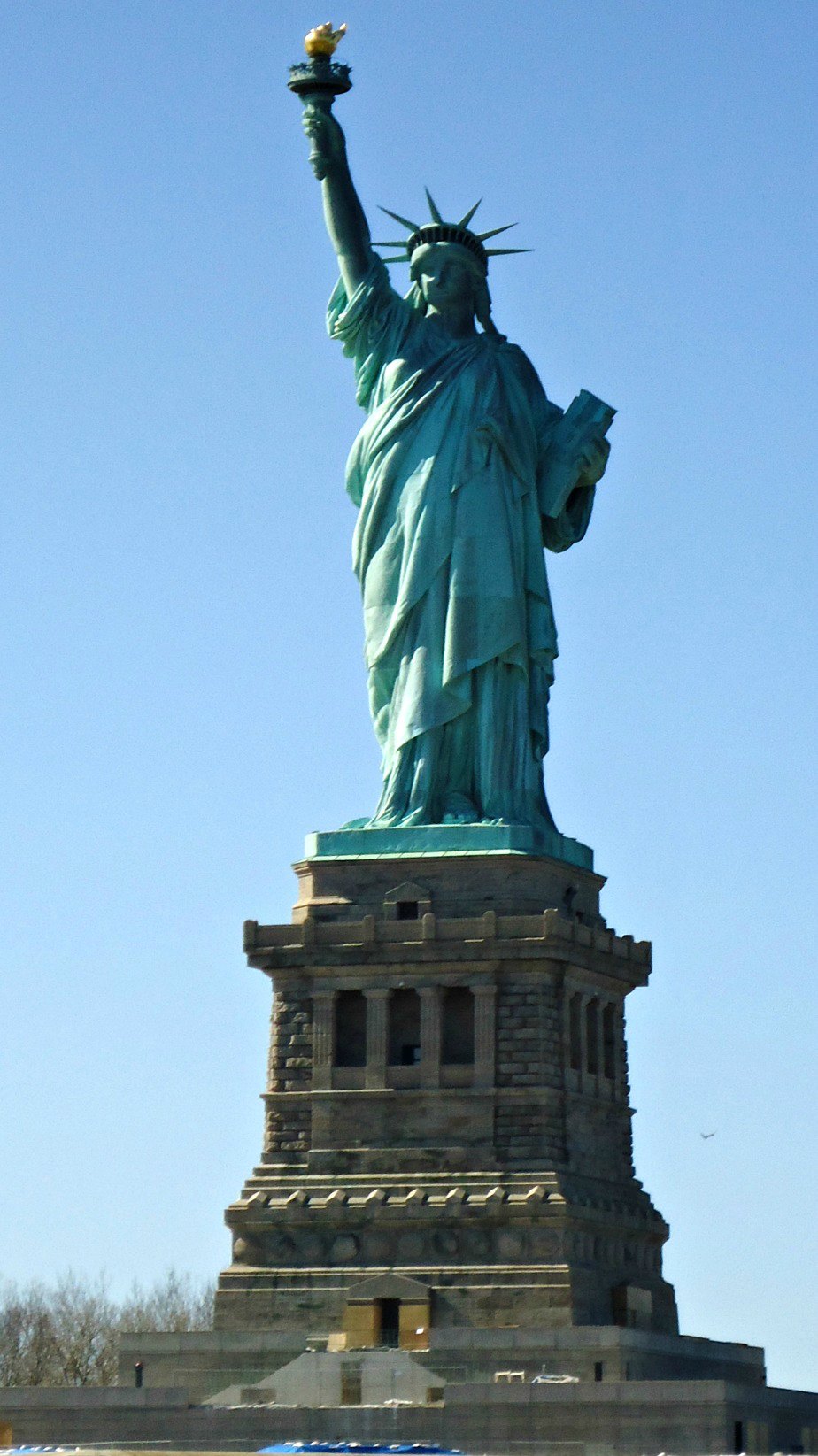 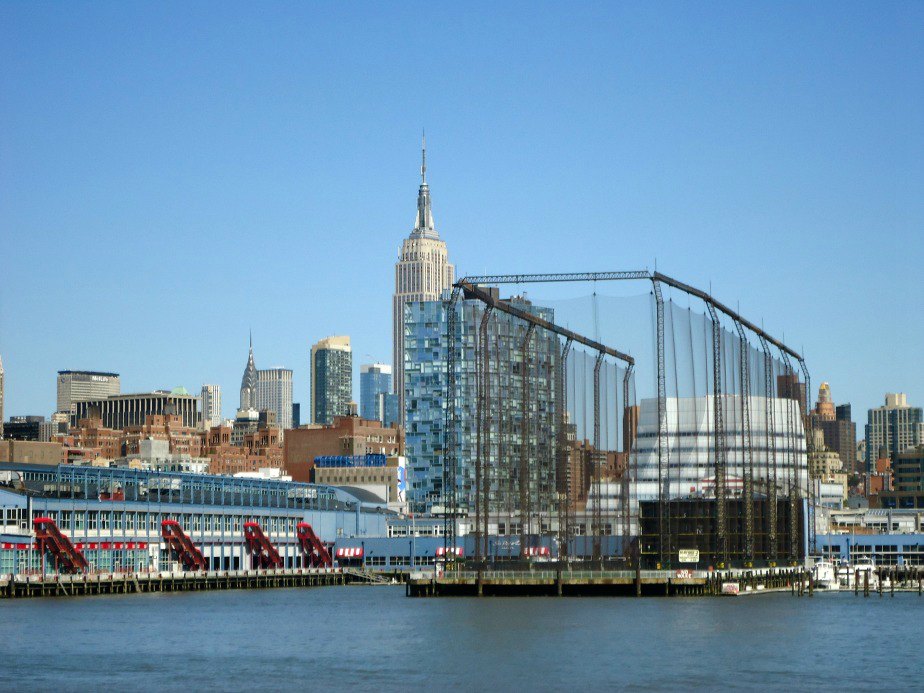 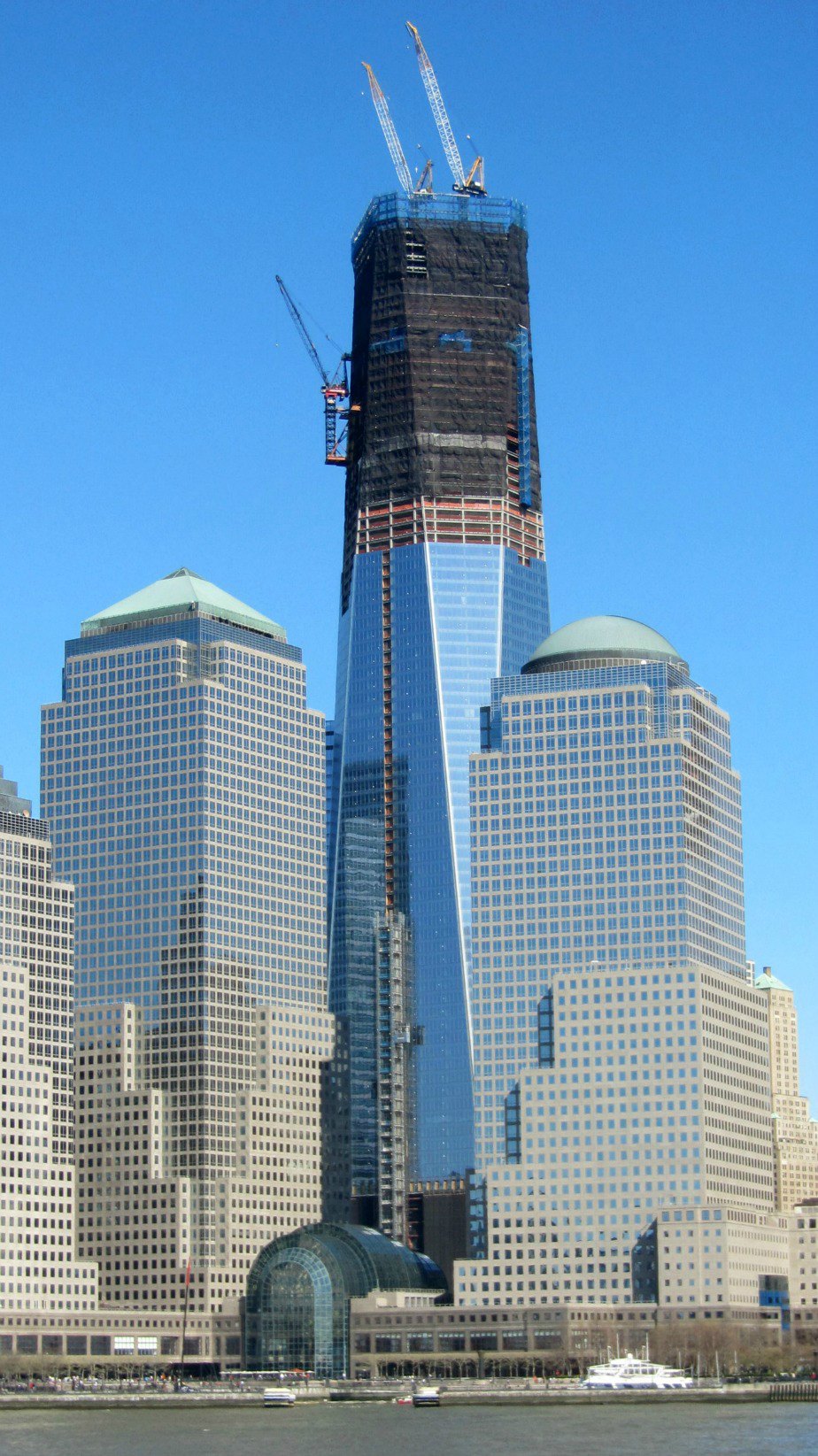 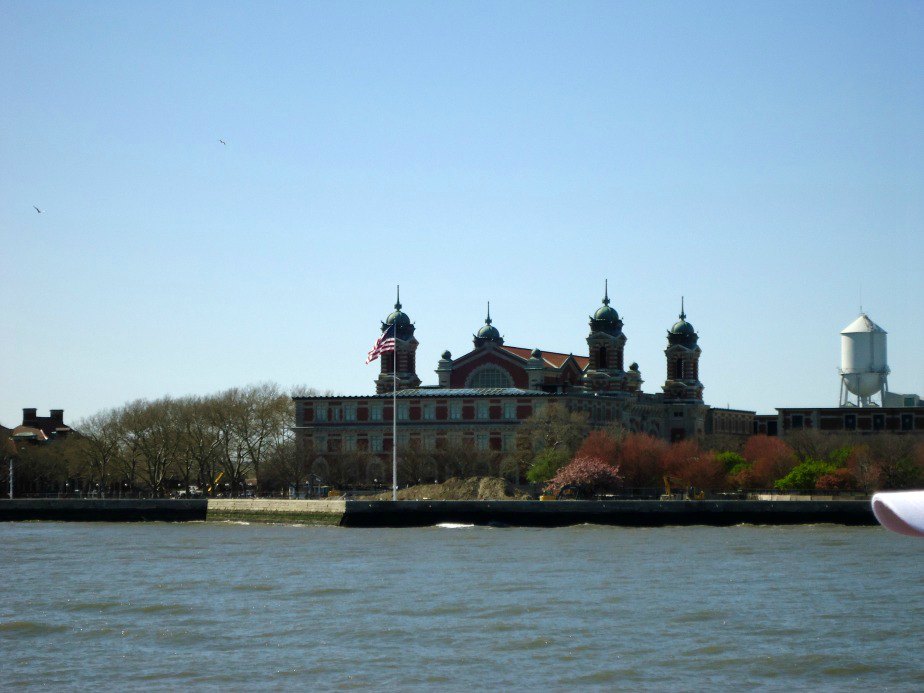 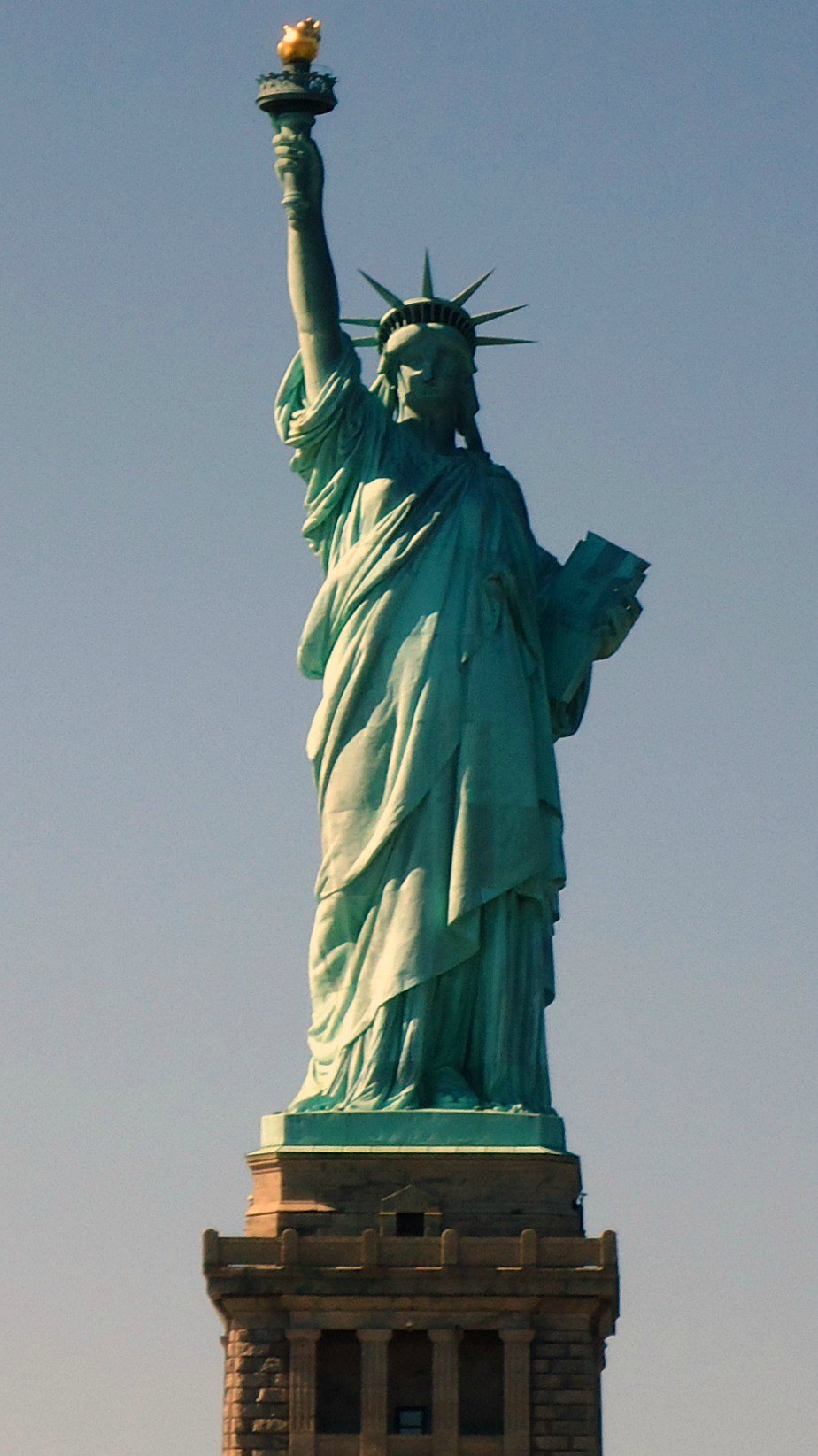 Coming in to Land 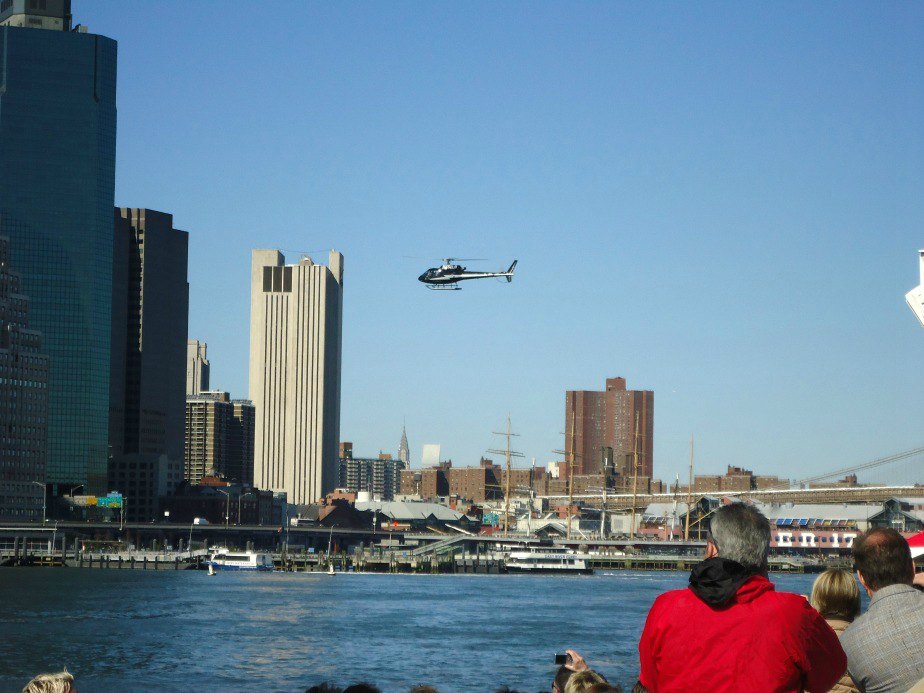 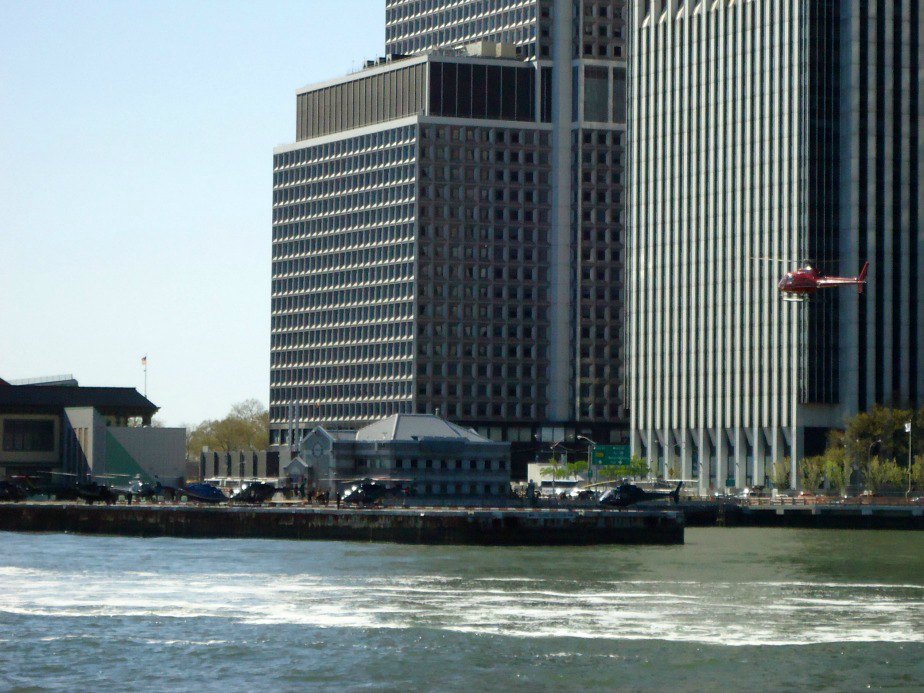 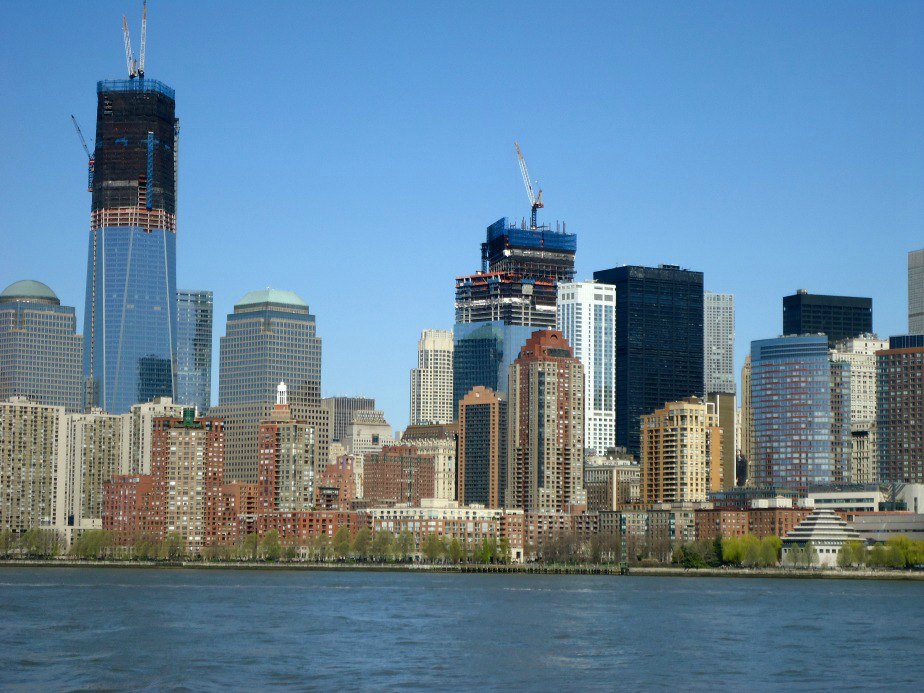 As the ferry pulled away from the pier the excellent, informative and entertaining commentary began, John really knew his stuff and how to deliver it, we learned so much along the way. First going south down the Hudson past Chelsea Piers with the golf driving range jutting out on the river, then on towards Ellis Island and out past the Statue of Liberty – everyone onboard went wild taking photos of the statue and each other with Lady Liberty in the background. The boat then turned back past the Staten Island Ferry Terminal and started heading up the East River, the wind was like ice!!

Past the New York Helipad with a constant stream of helicopters landing and taking off, then under Brooklyn Bridge, under Manhattan Bridge, under Williamsburg Bridge, past the ruins of the Roosevelt Island Smallpox Hospital, under the Ed Koch Queensboro Bridge and the Roosevelt Cable Car, past Gracie Mansion where the NYC Major lives, should he choose to.

The Chrysler Building is the Tall One Here

On another occasion, I was at the ‘Top of the Rock’ taking in the magnificent view from the top of the Rockefeller Center. From there you can see the bridge in question, I asked the security guy what the bridge that looked like Sydney Harbour Bridge was called, he looked and said, “That’s the RFK Bridge”. But no, on the Circle Line Cruise John informed us the rail bridge behind the RFK Bridge is Hell Gate Bridge, he went on to tell us it was the prototype for Sydney Harbour Bridge, (I’ve heard that the Tyne Bridge in Newcastle, England was the prototype………………..?!!?)

Cruising on further up the Harlem River, under Wards Island Footbridge, under University Heights Bridge and many more bridges, past the Columbia University Boat House, past Yankee Stadium and up to the tip of Manhattan Island, under the High Bridge Aquaduct (now a foot bridge), under the Henry Hudson Bridge where we had to wait for the Spuyten Duyvil Bridge, a pivoting rail bridge, to open up to we could pass through, then it spins back into place for the rapidly approaching train to cross. Trains have priority and everything is timed perfectly – generally. Only a few mishaps along the way, like the time someone drove a car on to the bridge into the path of the oncoming train (and survived!), or the time a boat hit the bridge and brought the trains to a standstill……… From here we were able to turn down the Hudson, and mercifully a change of wind direction, no longer quite as icy.

Looking up we could see the Cloisters, which form part of the Met Museum exhibition, built from parts of various European Monastries, all shipped over to New York over one hundred years ago. As we got closer to George Washington Bridge we could see the “Pumpkin House” (named because at night it looks like a Halloween pumpkin), which sits surronded by towers of apartments. An amazing piece of architecture that once sat all alone perched out from the cliff face looking over the Hudson.

The Little Red Lighthouse sits under George Washington Bridge like a toy, dwarfed by the giant bridge. Further down we passed Grant’s Tomb, and tribute to General Grant. He and his wife lie here in the tomb based on Naploeon’s Tomb. Then passing the Riverside Church and the Soldiers and Sailors Monument. Then the geology changes – the northern end of Manhattan needs parkland around the coast to sure up the island to support the buildings, south of 72nd Street the island is sitting on deep bedrock right down to Lower Manhattan so the building goes right to the edge of the island.

As the boat cruised back towards 42nd Street Pier, past Intrepid Sea, Air and Space Museum, John told us about the day Captain Sullenberger brought Flight #1549 down on the Hudson and all 155 passengers and crew were safely rescued – Circle Line Cruises were on hand to pump water out and help with the rescue.

The Soldiers and Sailors Monument

From Parkland to Bedrock

Book a tour on your Trip Over to New York

Itinerary for Trip Over to New York

Flew from Sydney to New York on Qantas via LA.

Arranged to be picked up at JFK Airport with Viator for the drive into Chelsea, also used for the return trip.

Stayed for a month in magnificent artists loft in Chelsea, found on VRBO.

Bought a one month travel ticket for the NYC Subway.

As part of Vivid Sydney, this is the light show on Customs House in Circular Quay. It was a bitterly cold night so the crowds were down - perfect!!🥂
.
.
.
.
#vividsydney2022 #vividsydney #vivid2022 #lightshow #customshouse #sydney #sydneycbd #beachscene #yellowlight #coldnightinsydney #lightupmylife #lights #outonthetown #seeeverythingandevenmore ...

Pyrmont Bridge crossing Cockle Bay in Sydney. Originally opened as a wooden bridge in 1858, then re-built as a steel bridge in 1902, closed to traffic in 1981, but still swings open to allow boats to pass, by arrangement with the person sitting up in this little booth.
.
.
.
#pyrmontbridge #pyrmontbridgesydney #cocklebay #sydneycbd #walkinthesun #lunchbreakinsydney #dwarfedbytoweringbuildings #heritage #heritagebridge #overthewater #bluesky #sydneyinwinter #westfieldtower #cba #flagsonthebridge #controltower #swingbridge ...

Vivid Sydney light show on Customs House in Circular Quay, the cold night didn't stop some of us hardy souls from getting out there. You don't often need hats, gloves, scarves and coats in Sydney, but I was so glad to have all those items on. ❄!
.
.
.
#vividsydney2022 #vivid2022 #vividsydney #kendone #lightupmylife #sydney #sydneyaustralia #coldnightinsydney #circularquay #customshouse #beanies #lightshow #exploretheworld #explorethecityyoulivein #seeeverythingdoeverything ...