Trip Over to Istanbul

Built in the 1400s, the world’s oldest department store sits in the middle of old Istanbul. After walking down the hill from our apartment near Galata Tower, we caught the tram from Karakoy across Galata Bridge, past Topkapi Palace, past the Blue Mosque and around the corner getting off at Beyazit. This stop is right outside the Carsikapi Gate, one of the main entrances to the Grand Bazaar (also known as the Covered Bazaar, or Kapali Carsi).

The atmosphere is electric, there is so much to see, unfortunately most of it geared towards the tourist market, but still interesting to see all the tea glasses, coloured hanging lights, scarves, jewellery, etc, etc, etc…… 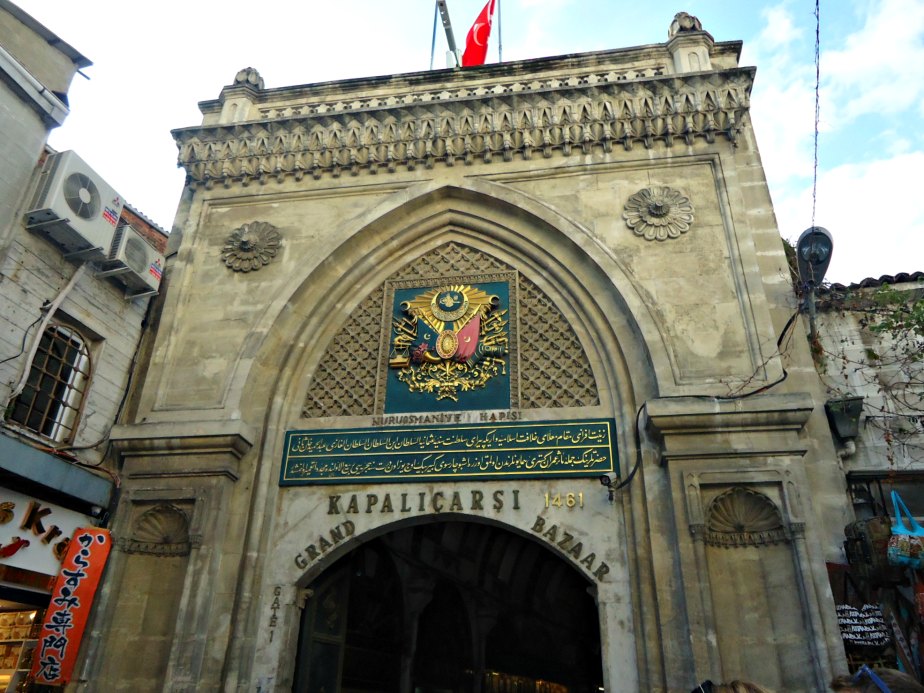 Now a Jewellery Shop, once the Sultan's Coffee House 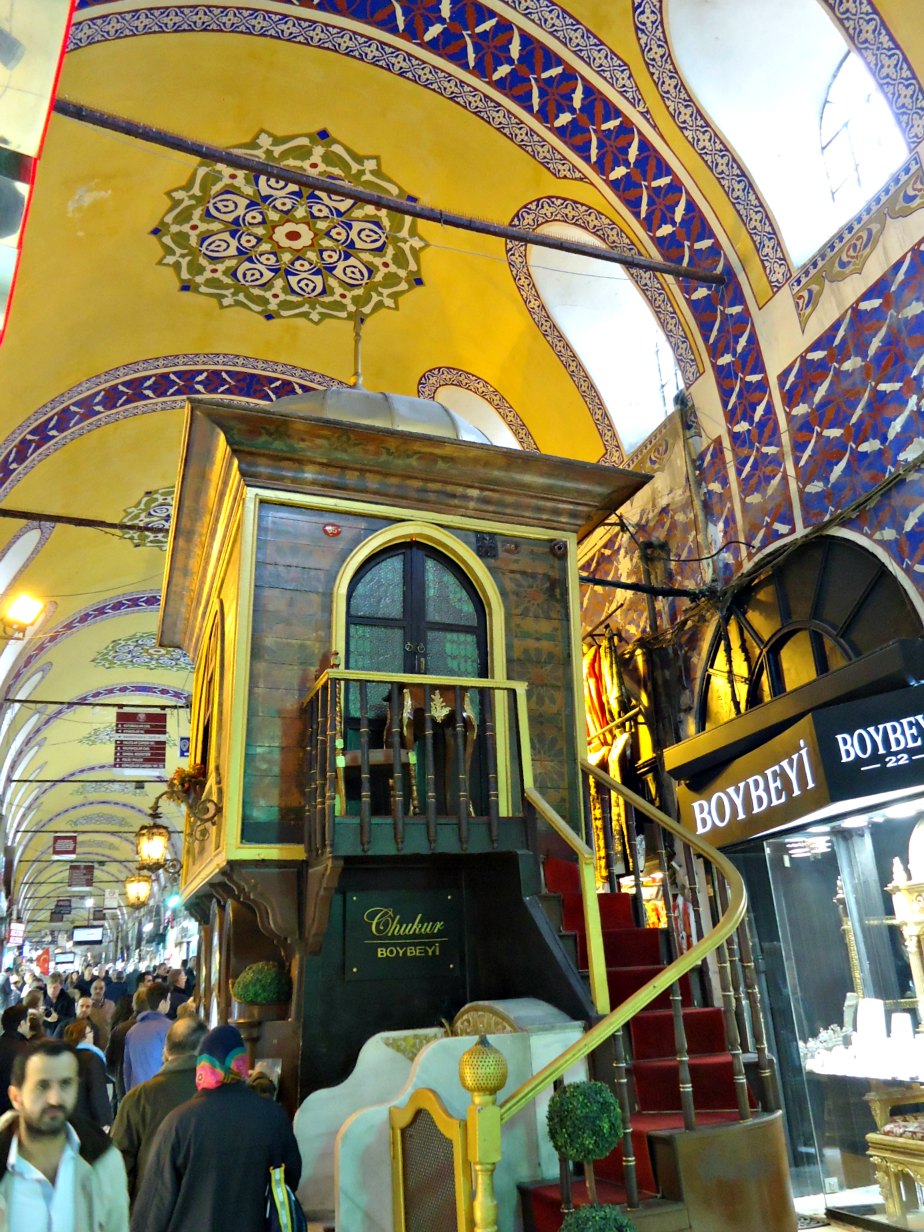 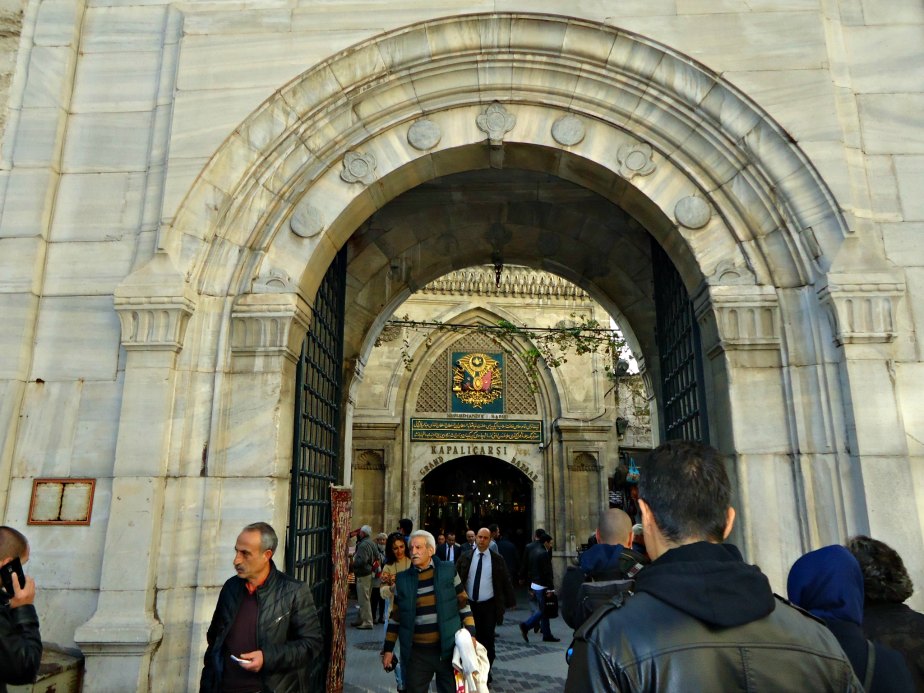 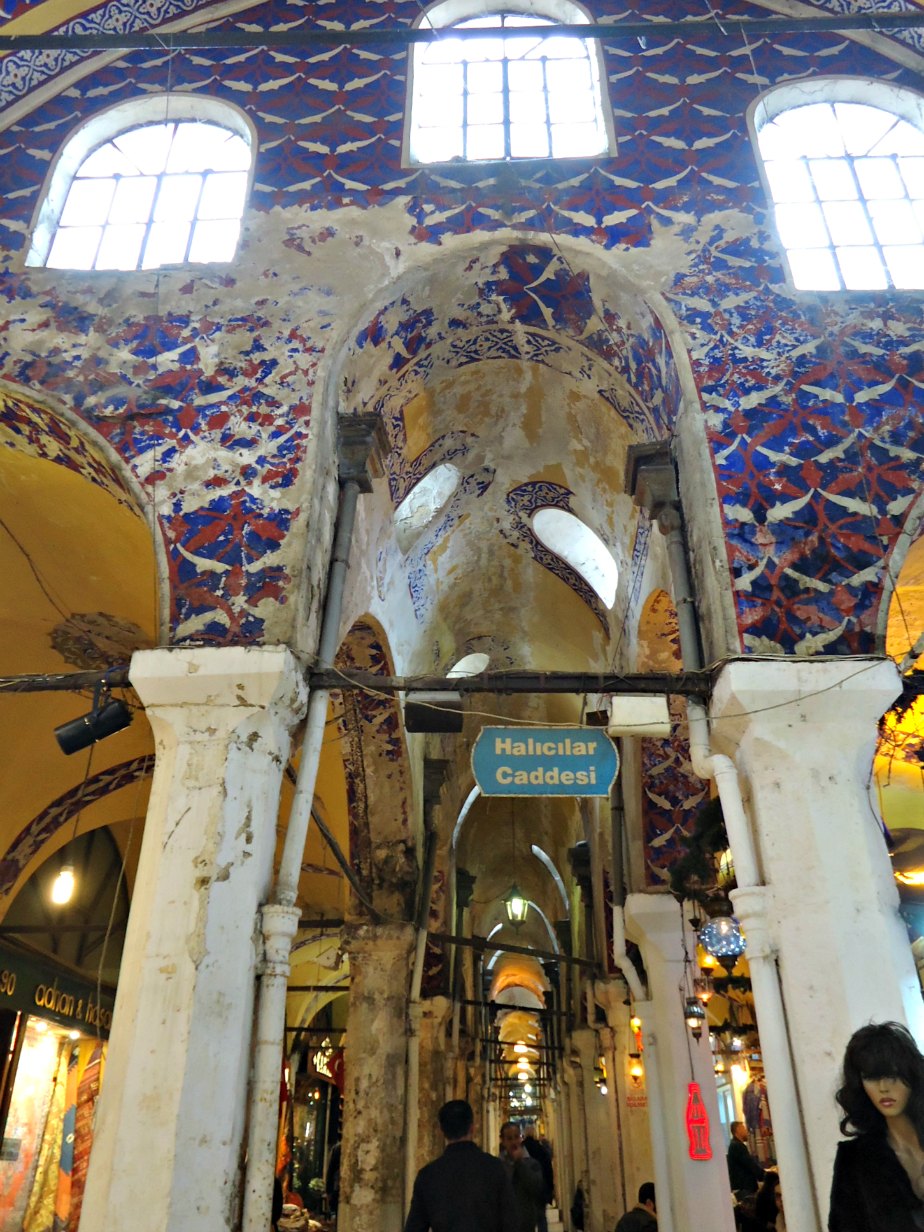 Looking at Carpets in the Grand Bazaar 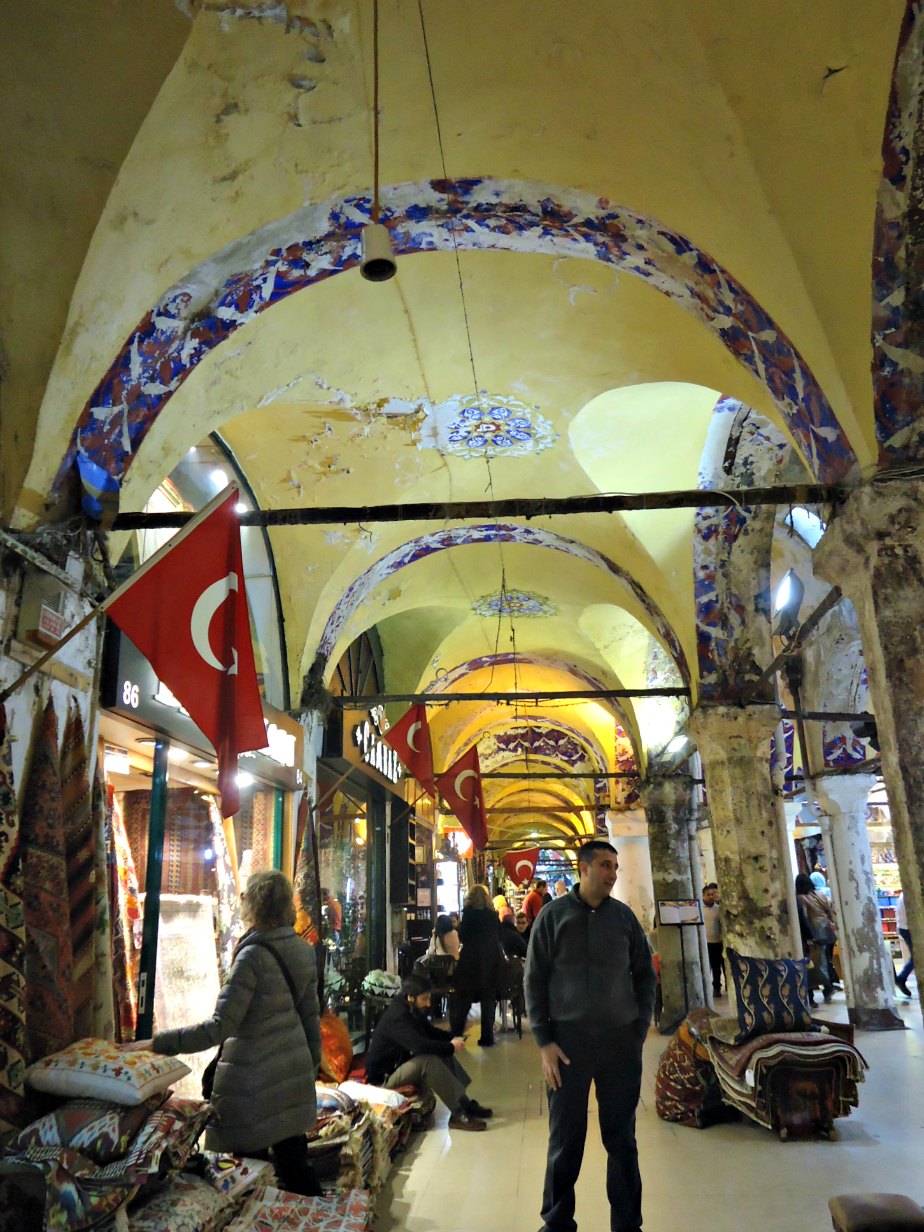 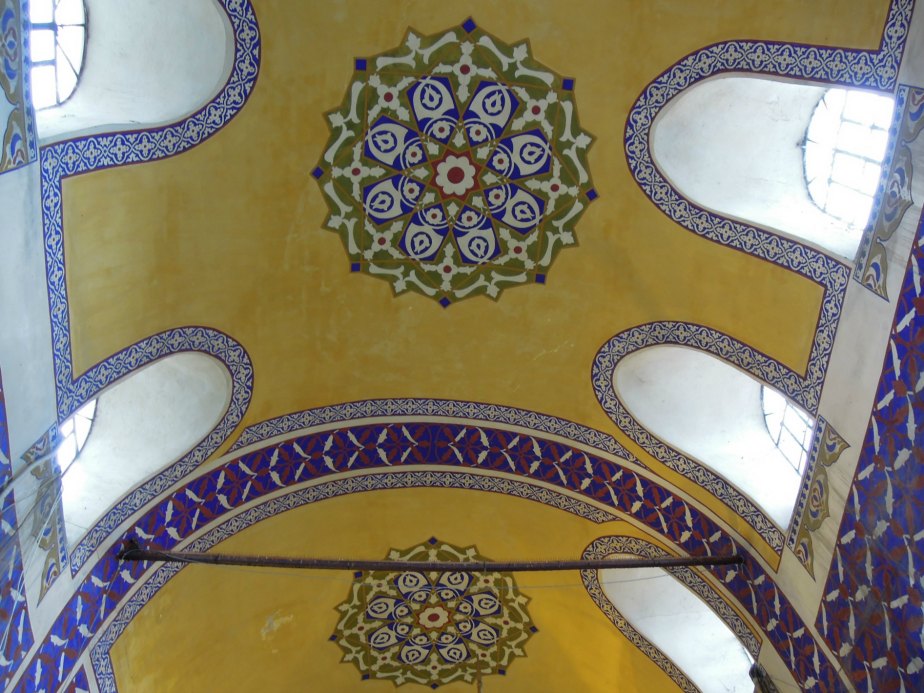 We were soon at the mercy of the many carpet salesmen, trying to lure us into their shops. Some of the rugs are beautiful, but as soon as you show any interest you are almost bullied into shops and forced to listen to their stories of why their rugs are the best. My eye caught a rug design that really appealed to me in one of the shops, the owner launched into his spiel about the silk, the double knots, the time taken to make the rug and how helpful he would be in getting the rug shipped back to Australia for me. I would have loved to own that rug, but from that point on, the more he talked, the more I felt he was leading me up the garden path. His poor assistant was unrolling and showing us rug after rug, and he would have to re-roll them all afterwards. I was told all about the deal he could do for me if I would accept the delivery of 5 other rugs he would ship to a warehouse in Sydney, and my rug would be in that delivery. Much to his denial, I felt I was going to be left with all the customs clearance and import duties on all the rugs, and may never see my rug again without paying all these charges. In order to get out of there I said I would contact my own freight forwarder and get back to him. We left, both of us knowing we would never see each other again.

There was one guy who followed us all over the Bazaar, every time we went into a shop, he waited outside to see if we were ready to be taken to his shop. I asked him to leave us alone, so he moved a bit further away. We had lunch, and when we came out of the restaurant – he was there waiting………….he followed us all the way back through the Bazaar to near gates, I shouted at him which attracted the attention of the security guards, this made him back off and disappear into the crowd. 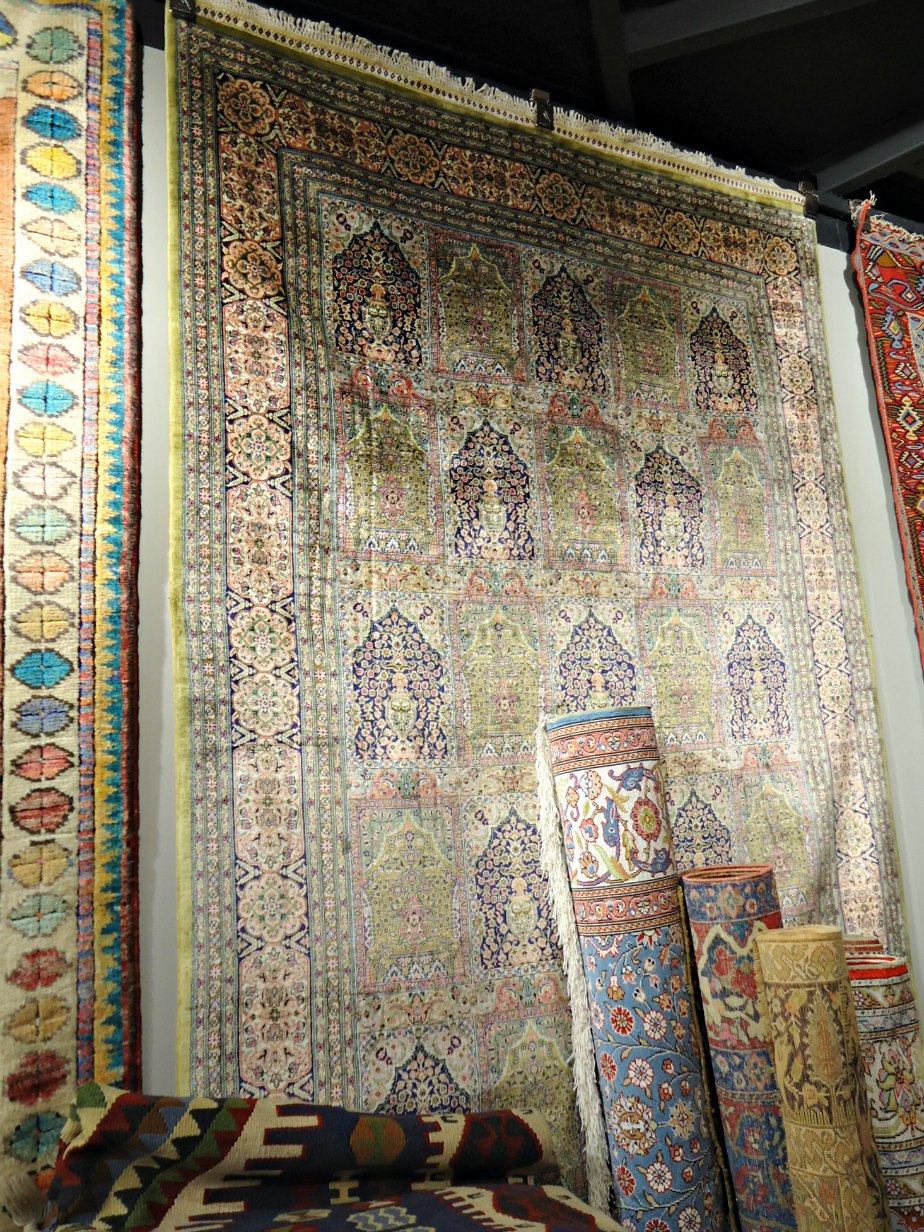 I wanted this beautuful silk rug.... 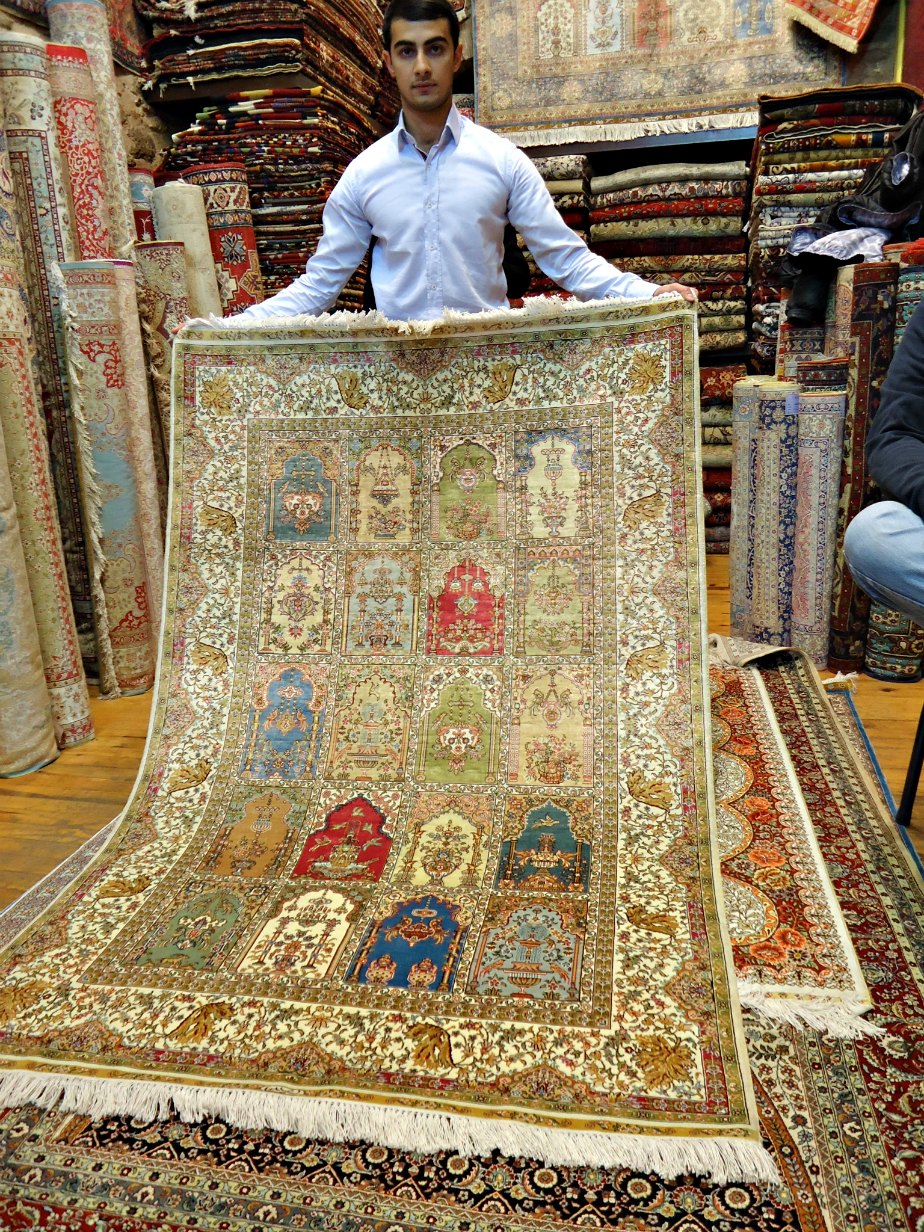 The growing pile of Turkish Rugs 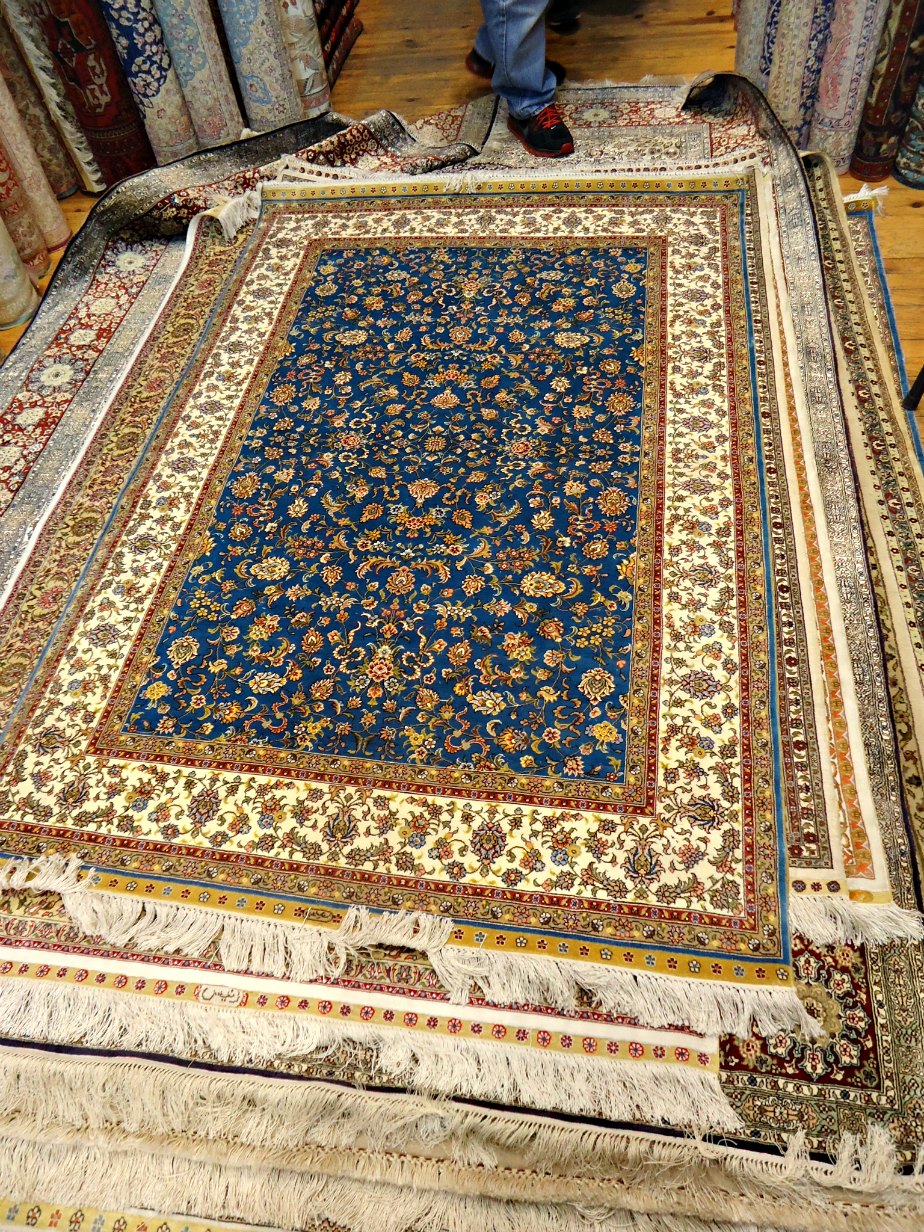 After walking miles through the labyrinth that is the Grand Bazaar, I became obsessed with a handbag. This obsession opened up a whole new adventure that we had never expected. I won’t be naming names or brands here as the fake trade is not something I want to promote. I had been told that the joke with the locals is that man with the best fakes is rarely around, as he is always in and out of the police lock up!! Maybe I hit one of those lucky rare days?

The first shop I went into and asked if they had the bag in question in black, led the lady working there to start shuffling suitcases around her tiny shop until she had exposed a trap door in the floor. She went down through the trap door and started pulling out the bag in question in every colour, except black. I continued on my search, the next shop only had the bag in red. As I came out of that shop a man associated with the first shop called out to me, “You won’t find what you are after anywhere and will eventually come back my shop, so save your time”. This made me determined to never go back to his shop, no matter what.

In a third shop, after trying to sell me all sorts of other bags, I explained that I was only looking for one type of bag not any other bag. She said she knew a man and ran off. I thought we were now getting somewhere – but no – the man she came back with was the man from the first shop. Disaster!!

Further into the Bazaar I found another handbag shop with the bag I wanted, but it was in black leather with gold coloured fittings, but now I was getting more determined, and fussier. I was now sure I wanted the bag in black patent leather with silver fittings. The lady there tried her best to sell me something else, then realising how determined (or maybe, some might say, stubborn) I was, she asked me to wait because she knew a man (I was dreading the return of the first man). She made a few phone calls, and told me someone was on their way. Rather than give up on me, my friend Christine was also fascinated by where this was all going to end, she was along for the ride too. 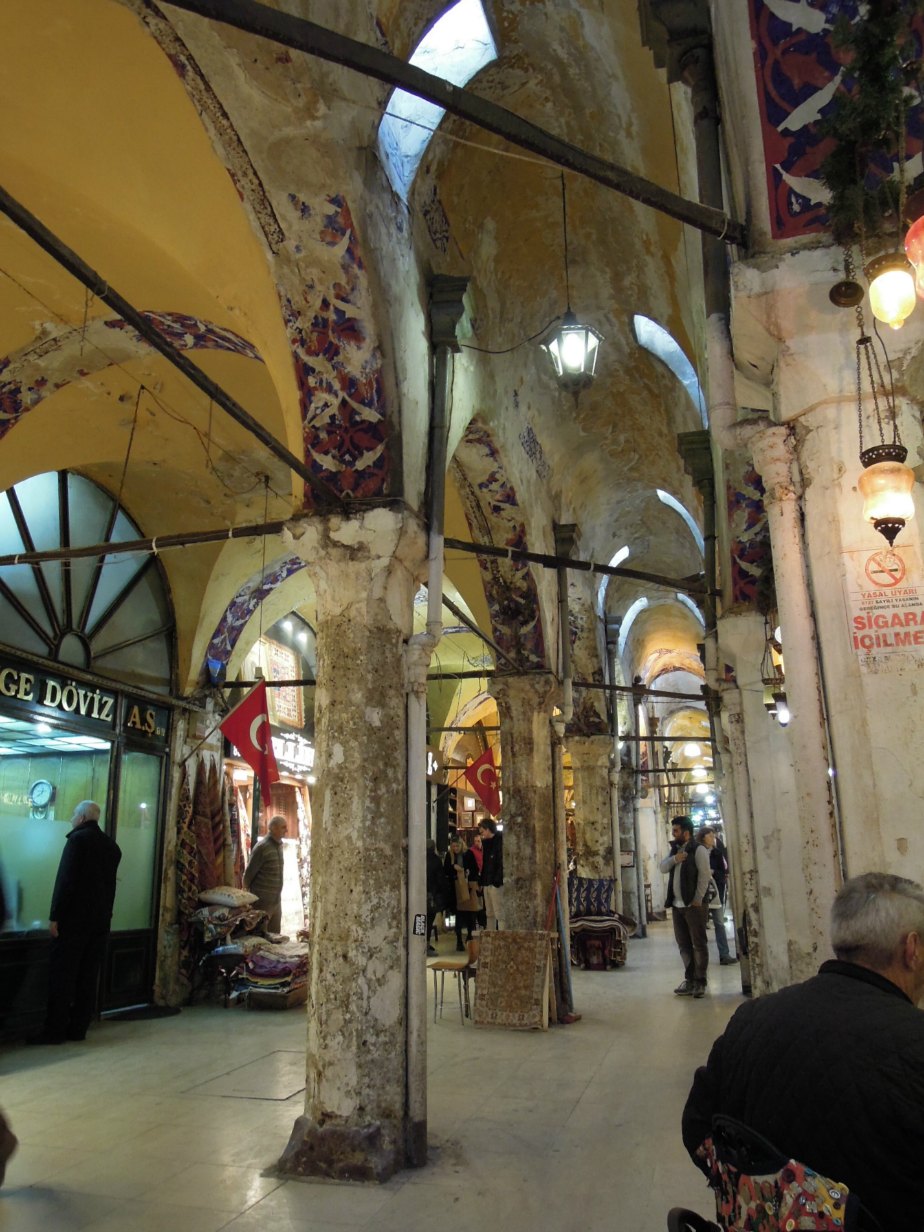 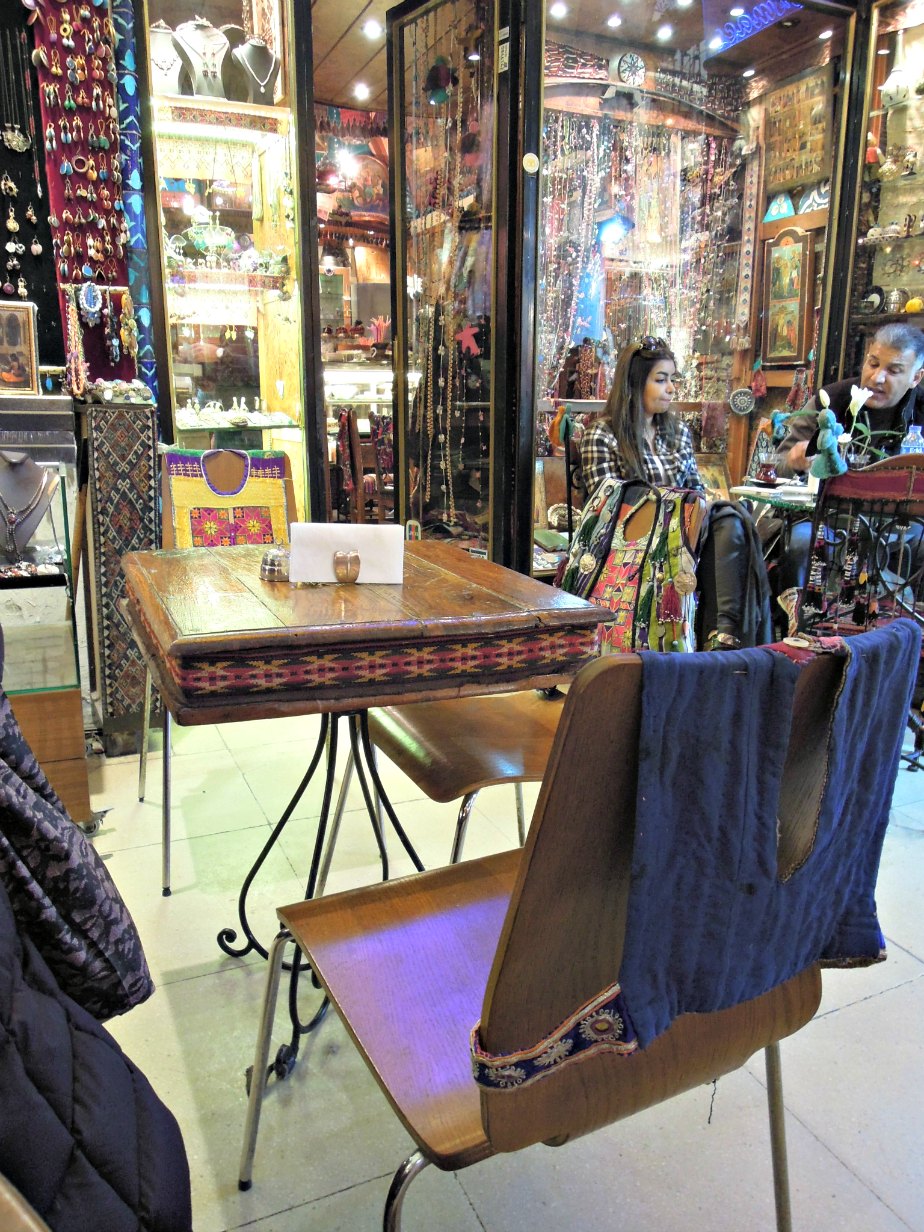 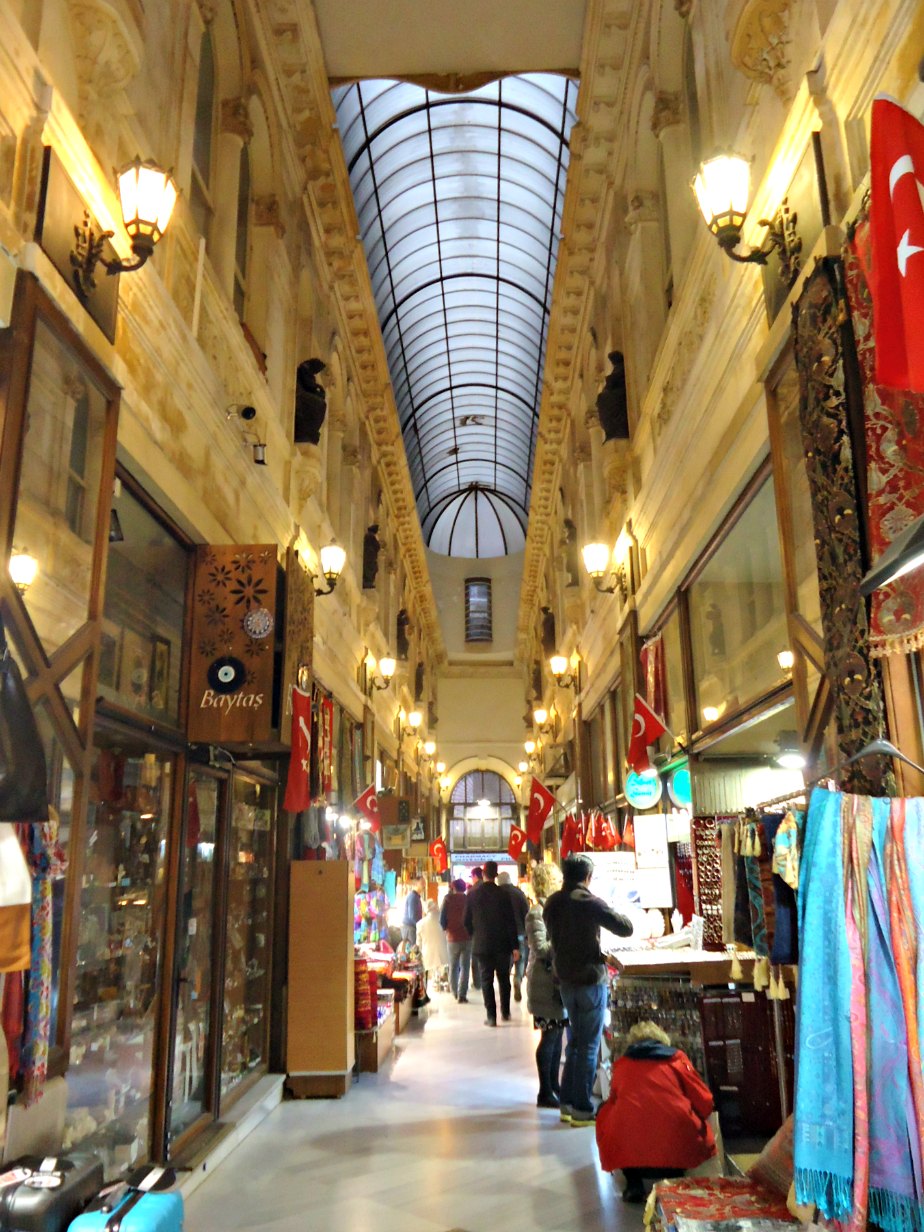 Fortunately, a different man appeared saying he would take us to where we could get the bag. We followed him down little corridors, upstairs, through courtyards, back downstairs, down a few more corridors (where were we going? We would never find our way back) until we arrived at an unnamed shop with newspapers stuck all over the windows, we went in and he offered us tea. This was a sign business was about to begin. First he showed me several bags in a different brand, I explained the only bag I was interested in, he disappeared and returned with the correct bag, but again with gold fittings. I tried to like it, but no, I really wanted silver. We drank more tea while he made a phone call.

Eventually a young man came in through a side door, with a sack over his shoulder. In the sack was a box, in the box was the bag – it was perfect – I figured I had found ‘the man’ between arrests. We started talking money, he named his price. I was prepared to pay less than half that, so I knocked two thirds off it. He didn’t kick me out, so I knew we were now going to haggle somewhere in between. More tea was poured, this was now serious.

He lowered his price quite a bit, I raised mine a just a little, he made a phone call, and got out a calculator (just tactics to make me think he was worried about the bottom line on his balance sheet). He lowered his price a bit more, I raised mine, just a tad. He asked me how long I was in Istanbul for, and nearly died when I said I was there for a month. He laughed and told me that usually he can get his price because the customer has to leave very soon on a cruise ship or something, he said he can’t do this for a month – I said, “I can”. He laughed again and made another phone call.

After this call he confirmed that I could pay cash, I could, we haggled a bit more. We got to within the equivalent of five or ten Australian dollars of what I was prepared to pay, he deserved at least that for the entertainment. I called it, the deal was done, cash changed hands the bag was carefully wrapped in tissue, placed into a cotton drawstring bag, then that was placed into an unmarked box, then put into an unmarked shopping bag. He explained that I must never tell anyone who or where he is. He showed us out and told us to go through the door and the end of that corridor and we would be back near the centre of the Grand Bazaar. The way in was clearly to throw us off the trail (it worked!) and I am very, very happy with my trophy. My favourite bag…….ever, not just for the style, mainly for the back story. 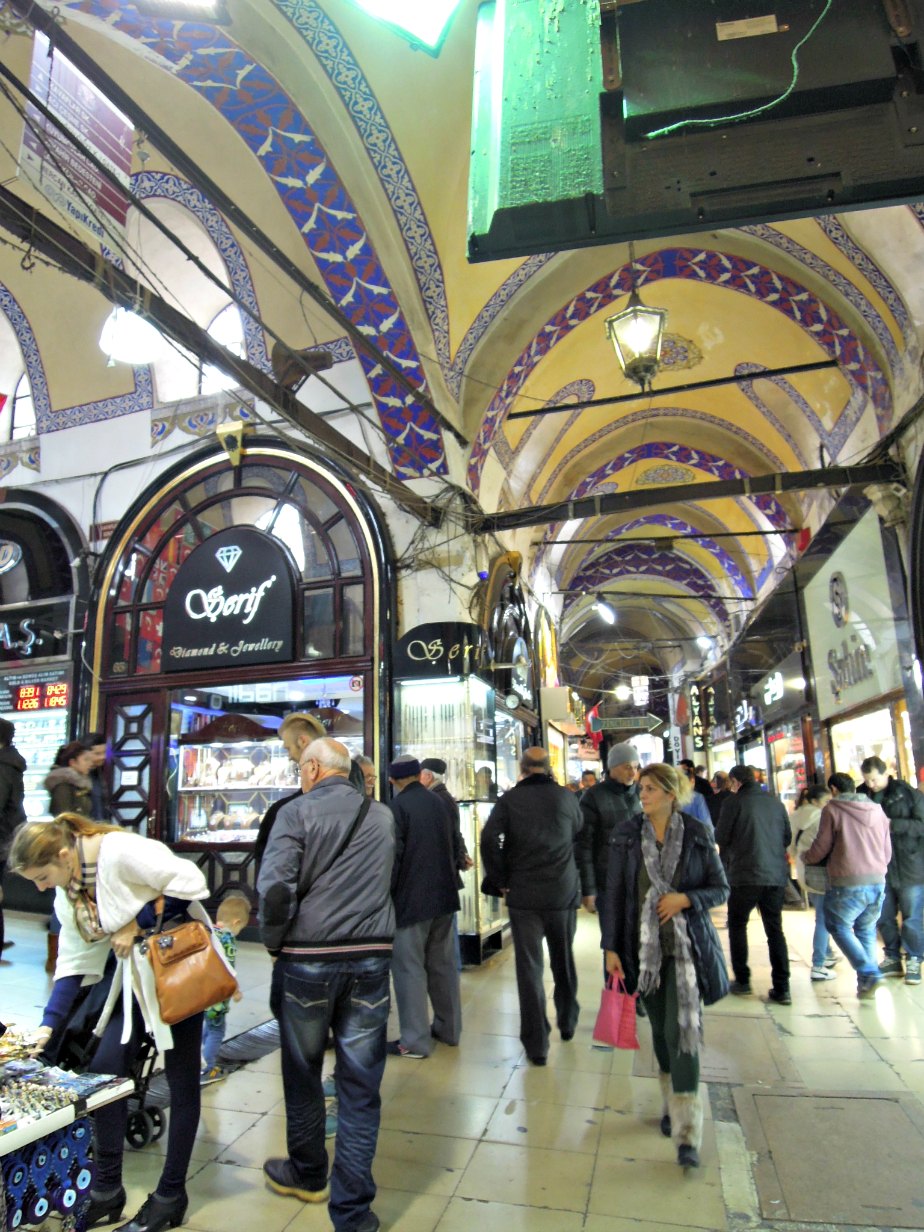 Walking from the Grand Bazaar to the Spice Market 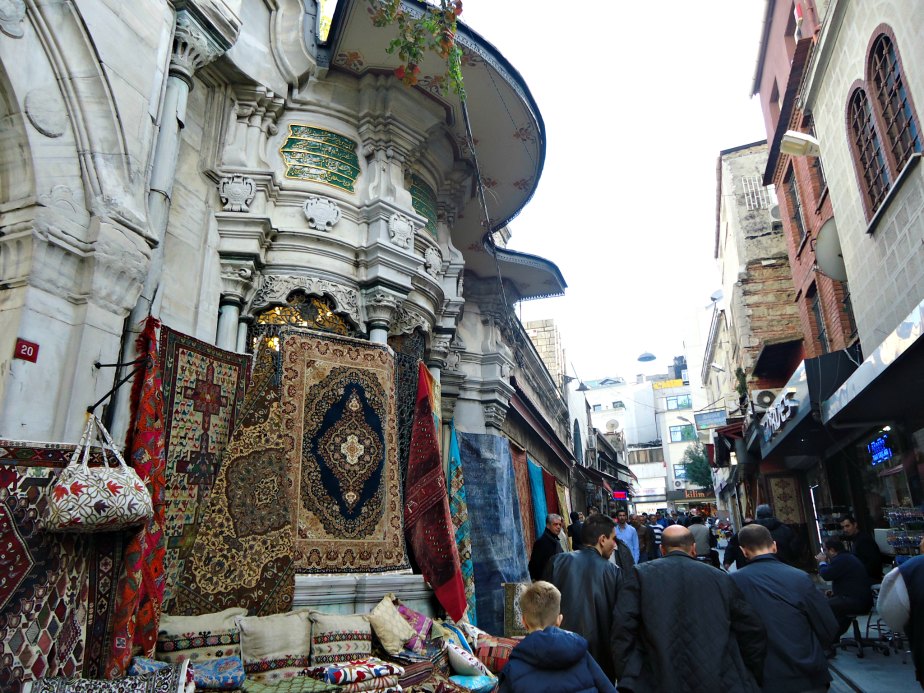 Entrance to Spice Market in the Rain 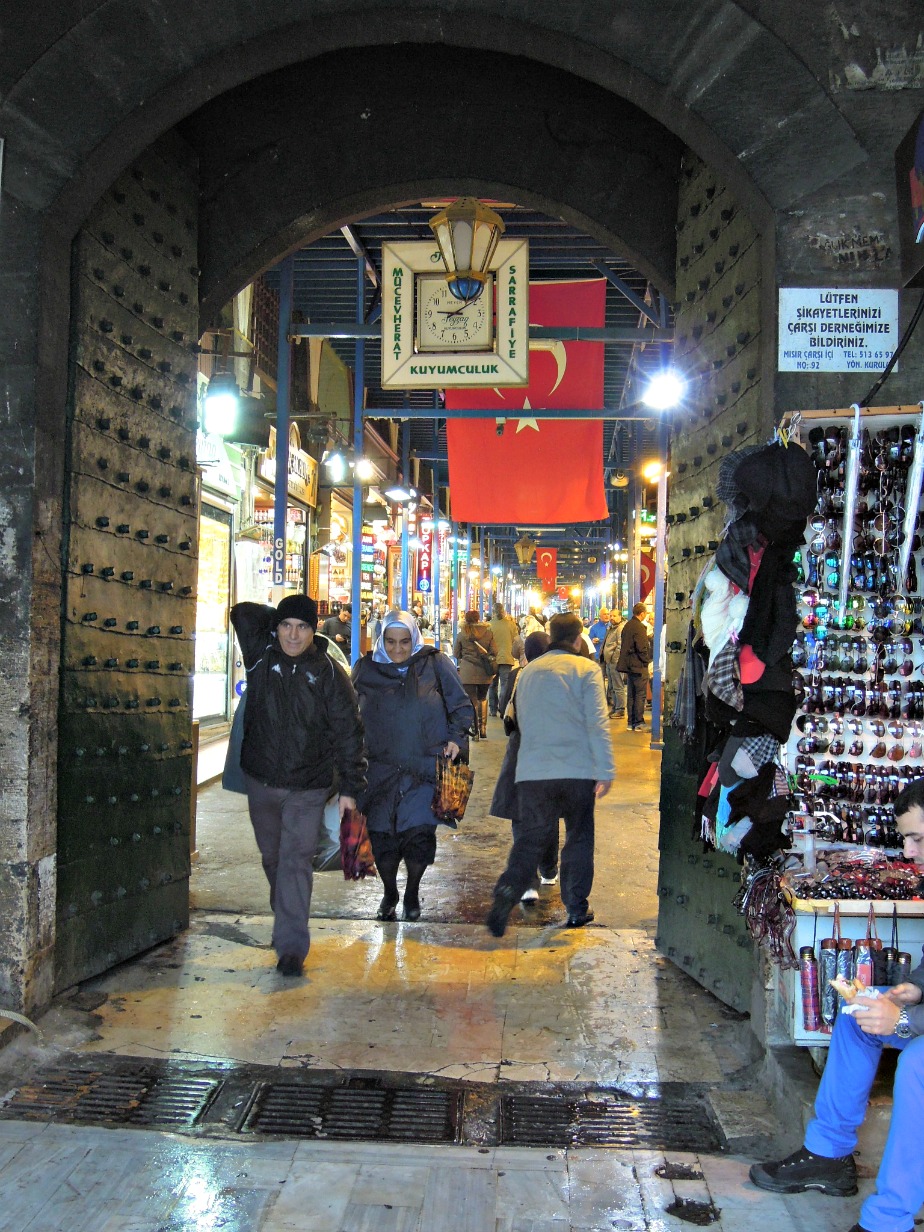 Spices at the Spice Market 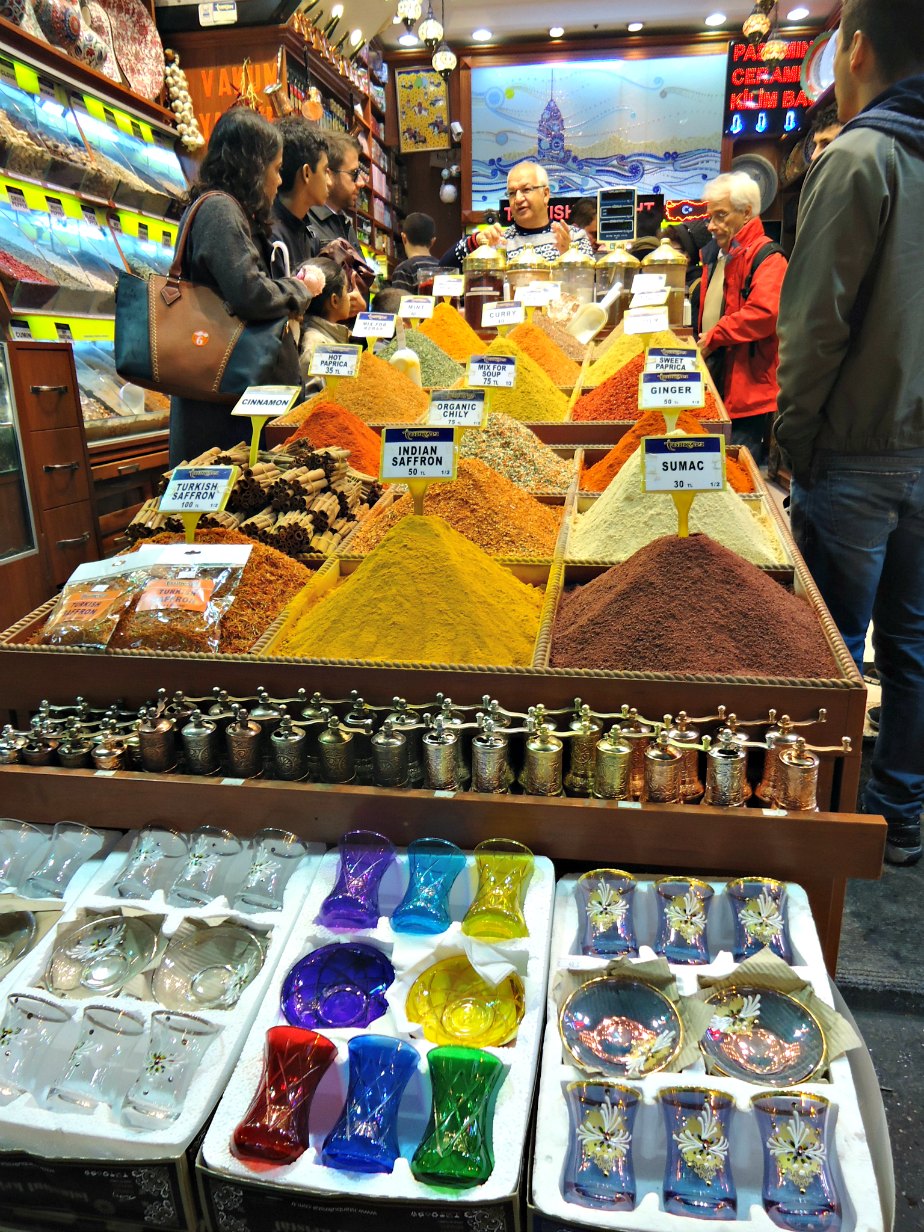 Olives Outside the Spice Market 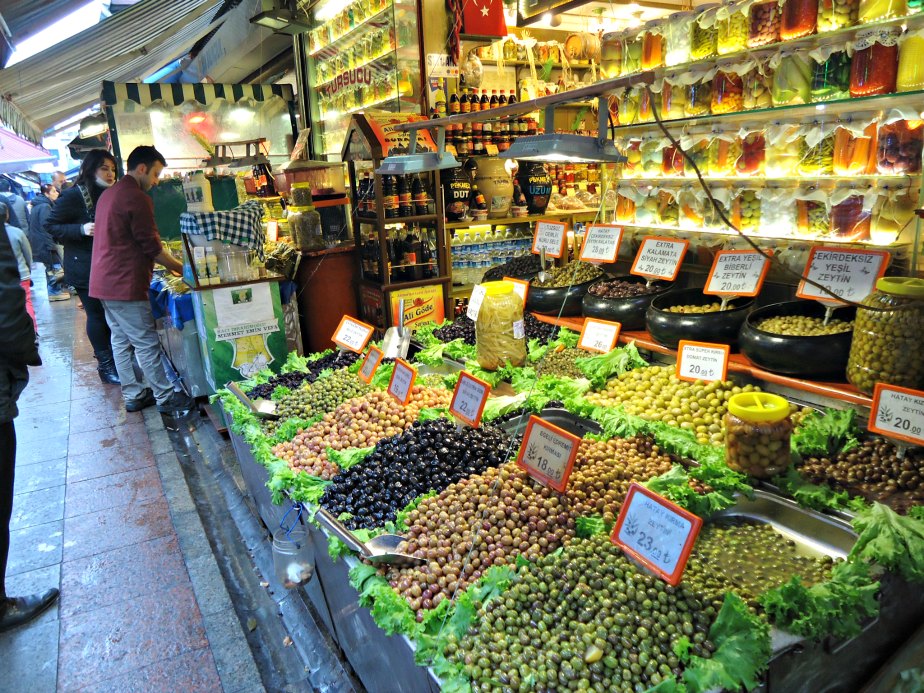 Fish Outside the Spice Market 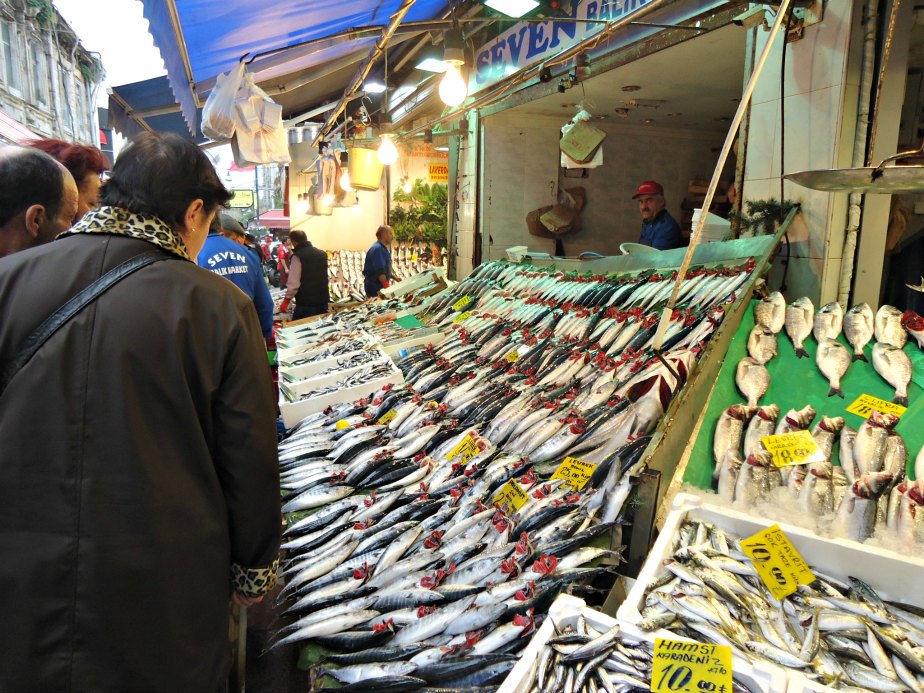 Now we were swept up in the crowds heading towards the Spice Market (otherwise known as the Egyptian Market). You know when you are getting close as the exotic spice aromas fill the air. Buy a fresh pomegranate juice on the way in and get ready to taste some of the delicious Turkish Delight samples you will be offered. Unless you are planning on doing some extravagant cooking, the spice stalls are just for interest. You will get to hear the family history and hear all about the combinations of various spices traditionally used in Turkish cuisine. The will offer to package them up into bags that will be accepted through customs when you go home, but as bringing food items into Australia is not allowed, I don’t imagine for a moment that unidentifiable powders and leaves from Turkey would get through! Apart from that, I have never had a use for a product known as ‘Fish Spice’, now is not necessarily the time to start – my life void of fish spice will continue…..

Outside the Spice Market is a very popular coffee shop, with queues of locals going to get their super strong ground coffee to take home. It smells fantastic, but that’s enough for me – even the strong smell is enough to put hairs on your chest. As this is not the look I am after – we move on through the vegetable and fish, on through the kitchen goods, cooking utensils, pots, pans and hardware until we are back near the Galata Bridge, and ready to take my precious handbag home, and have a glass of wine on out roof top terrace overlooking the Galata Bridge to the Bazaar Quarter. 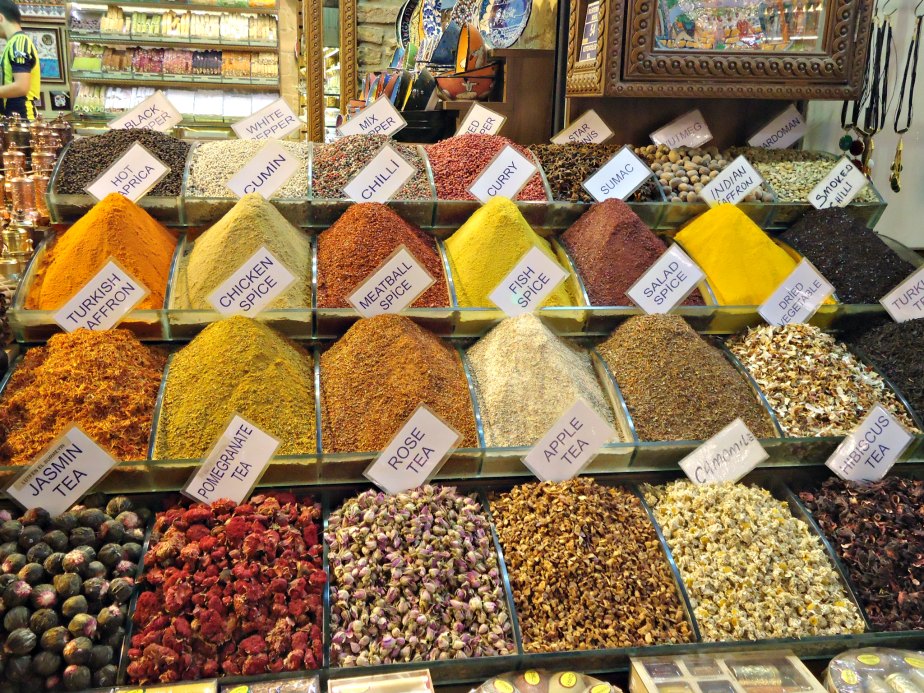 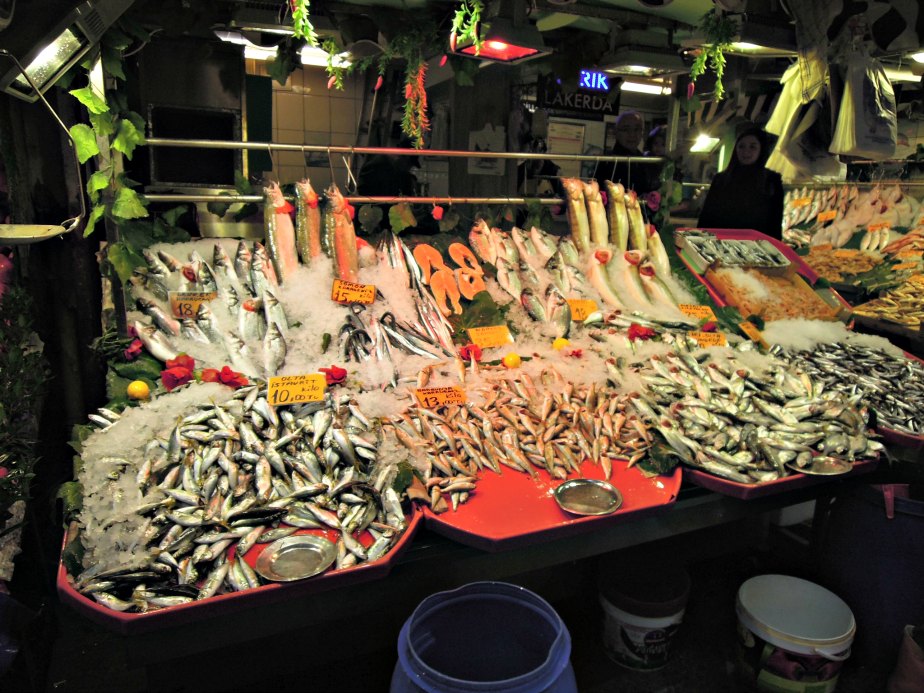 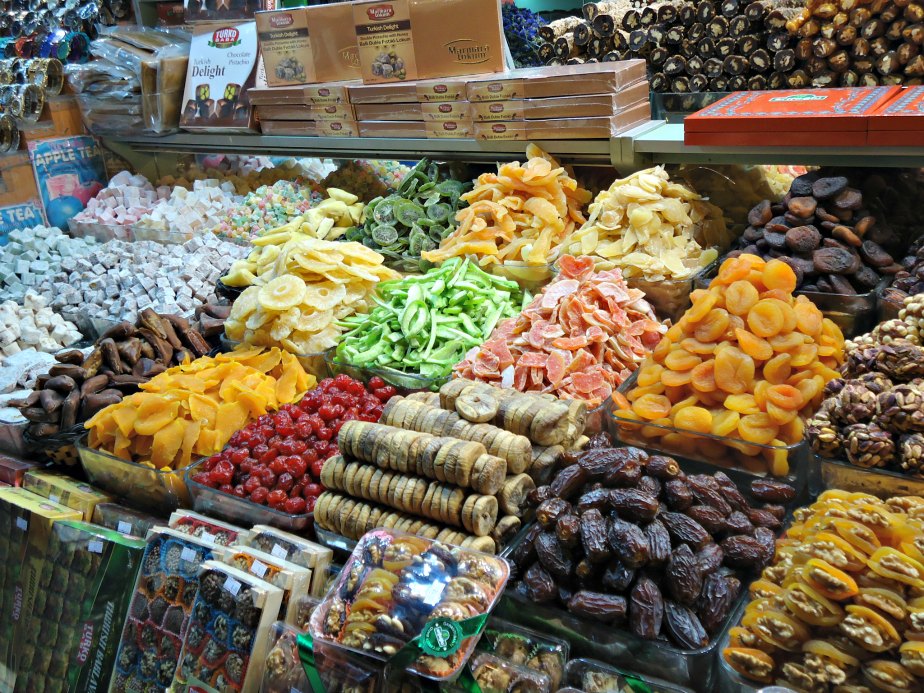 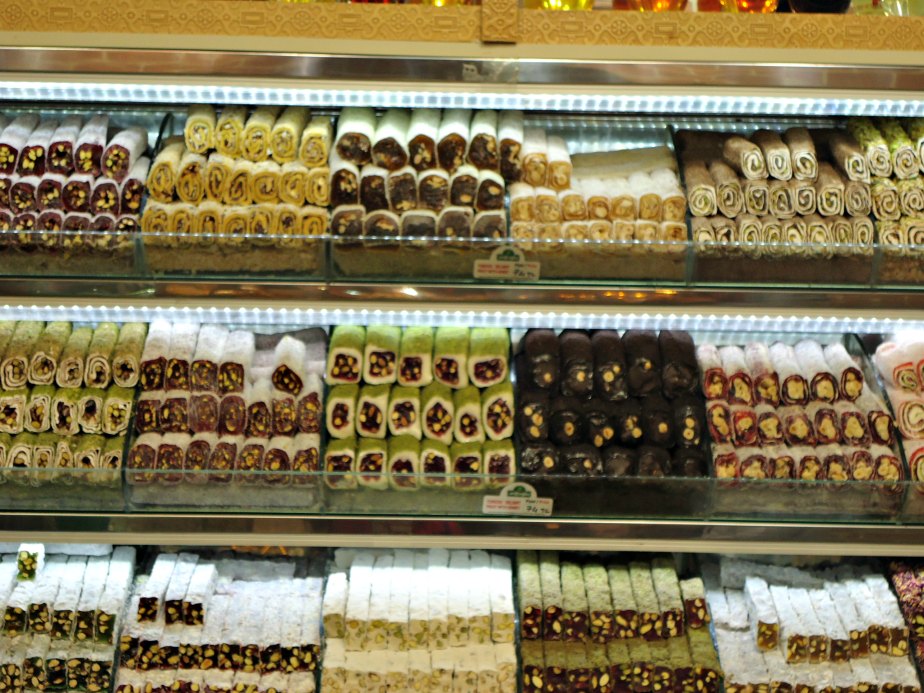 Preserves at the Spice Market 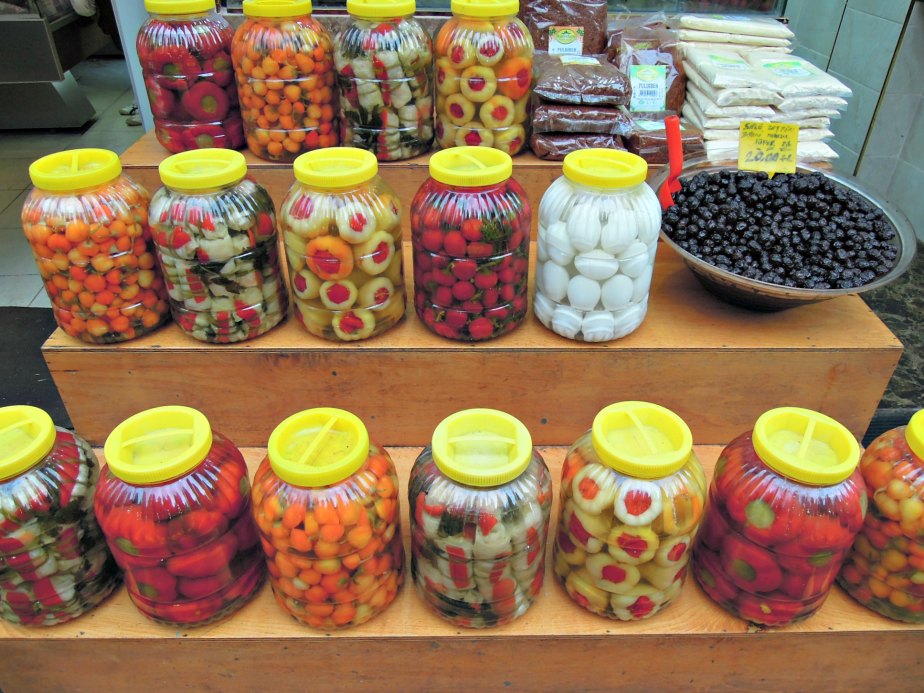 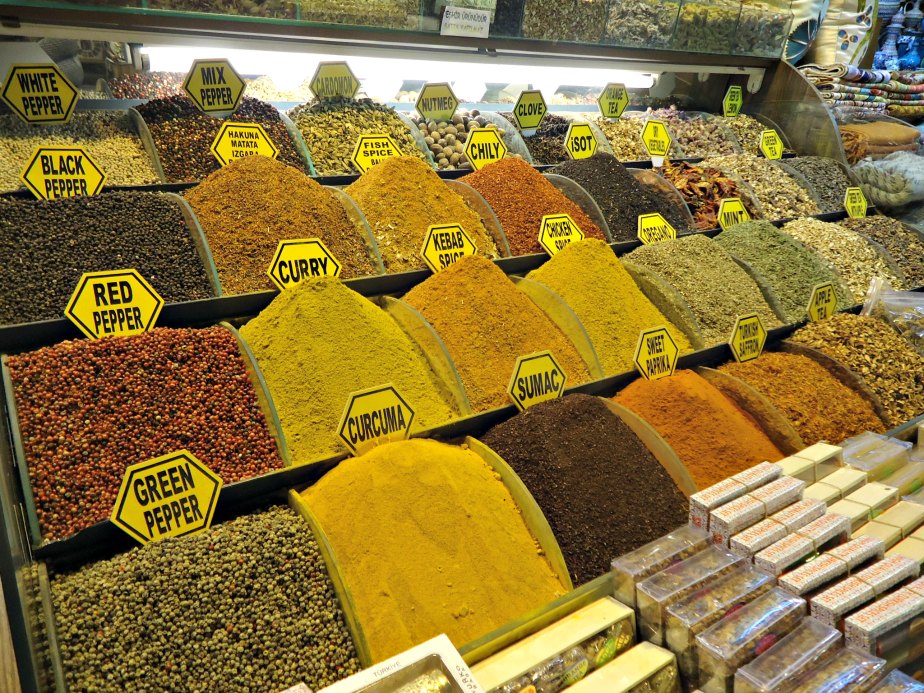 https://www.partner.viator.com/widgets/whatsNew.jspa
77661
en
585
3
Take a Tour on your Trip Over to Istanbul
850
true
true
whatsNew
true

Itinerary for Trip Over to Istanbul

Flew from Sydney to Istanbul via Dubai, with Qantas/Emirates.

Stayed in an apartment near Galata Tower for a month – rented through Istanbul Place Apartments.

The apartment came with 2 transport cards, that we just needed to top up and we had tickets for all trams, funiculars and the metro.

Istanbul Place Apartments arranged for us to be picked up at the airport on arrival, and taken back at the end of our holiday. 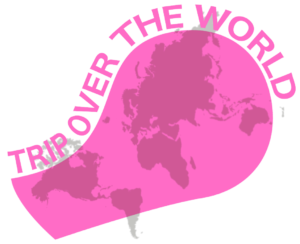 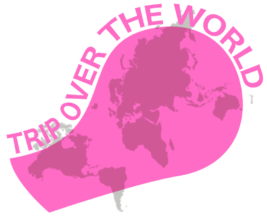