Trip Over to Brunate from Como

A visit to Como must include a trip up to Brunate, (pronounced:- Broo-nart-eh) , high – very high – up on the ridge. The views over Lake Como and some of the lakeside towns create a memorable panorama, and looking way up and over the northern end of the lake, the snow covered Swiss Alps complete the postcard.

From the lakeside path leading to Villa Olmo on the other side of the lake you can see the funicular carriages heading up and down through the trees, just as they have done since it opened in 1894. There have been a few upgrades in that time, from steam to electricity in 1911 and more recently the carriages were replaced with very comfortable, fully air-conditioned ones.

Historic Como from the Funicolare 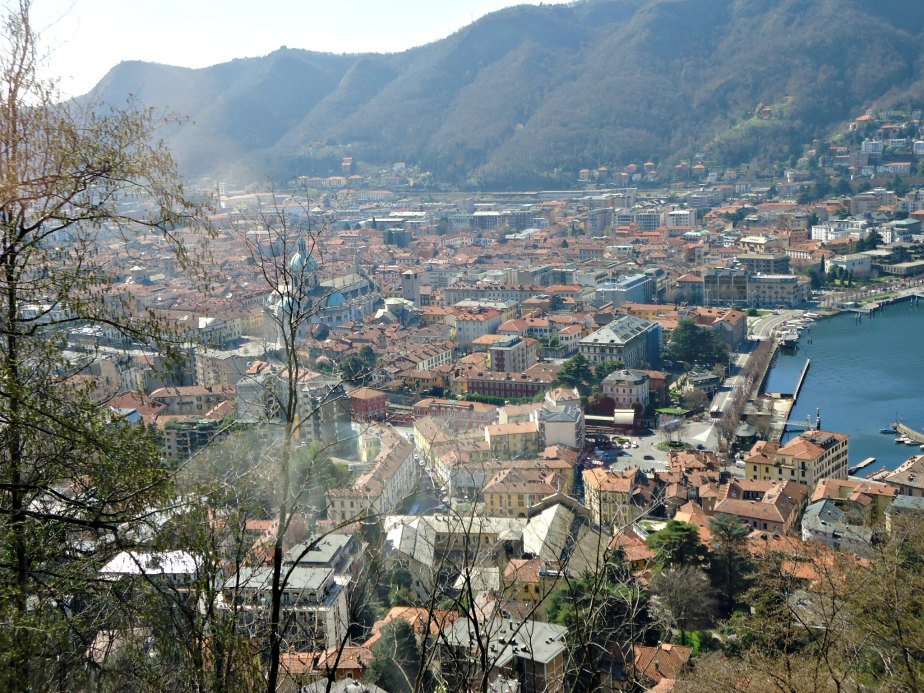 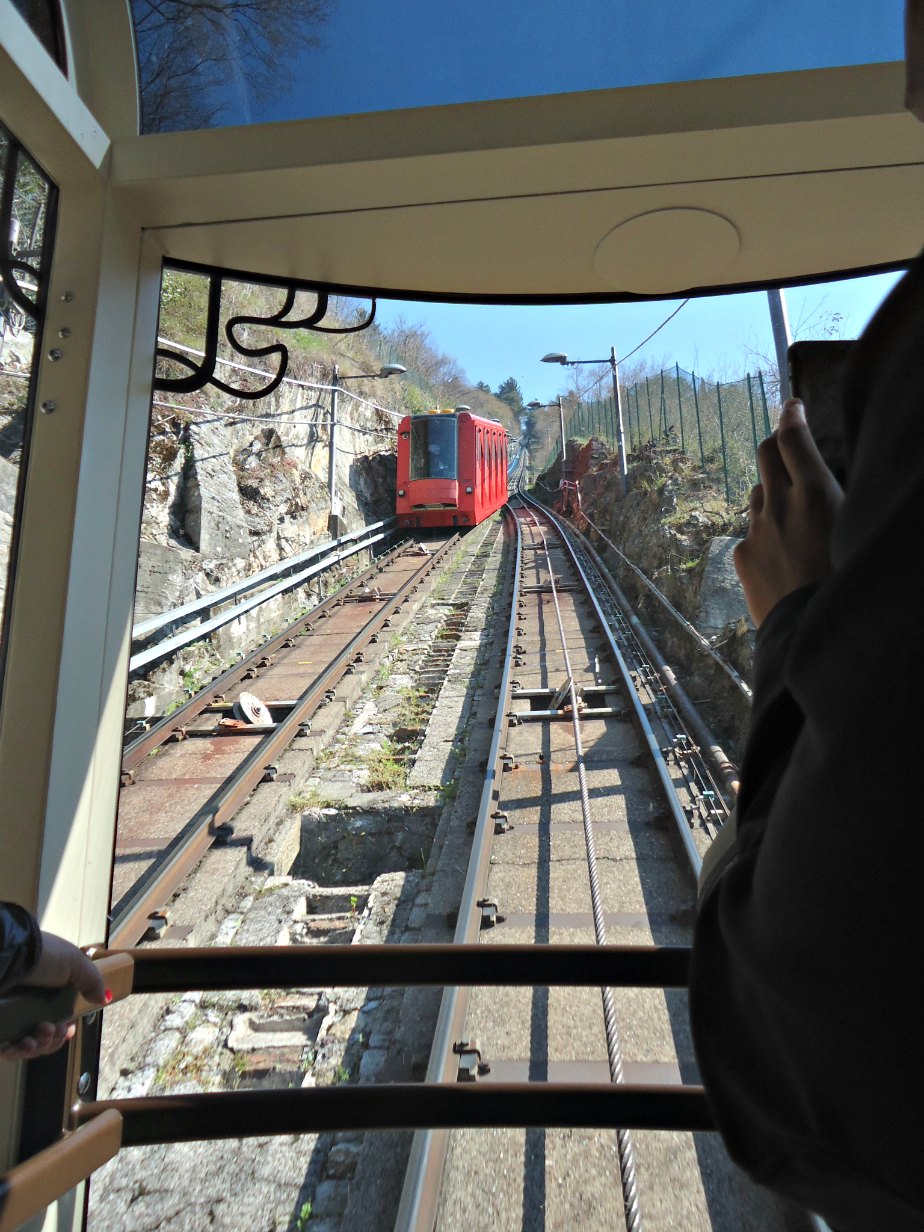 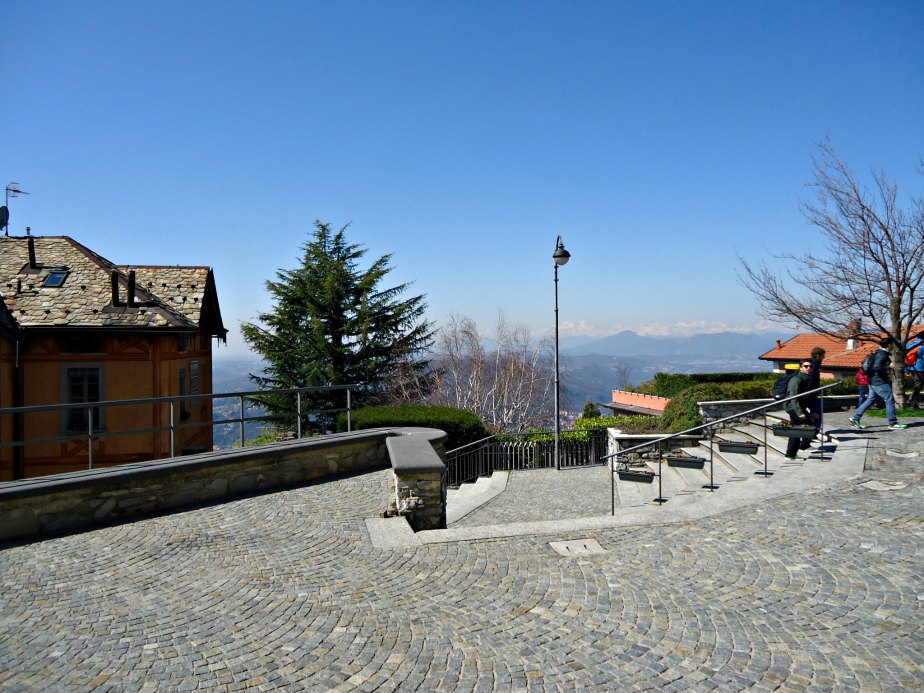 Looking across Lake Como to the Funicolare 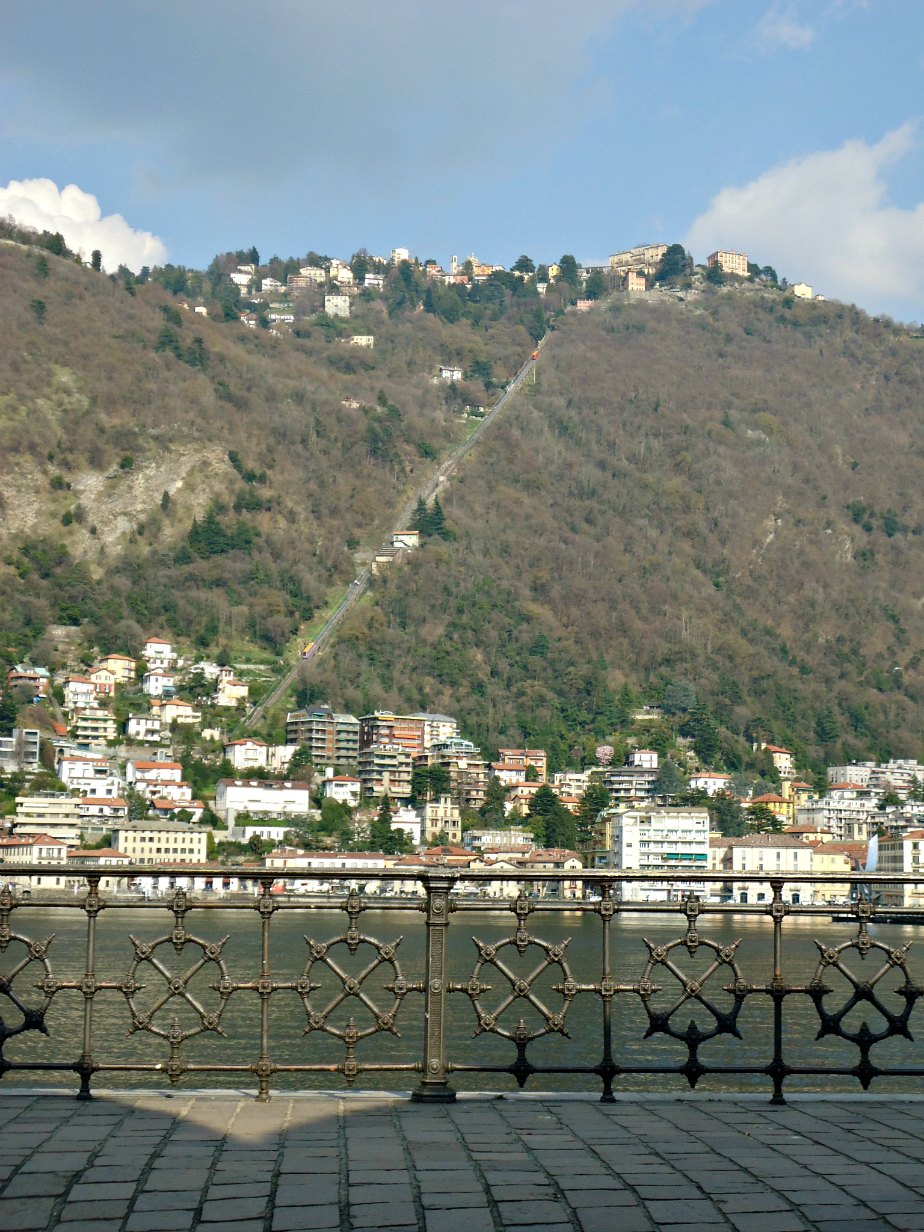 Looking Towards the Alps from Brunate 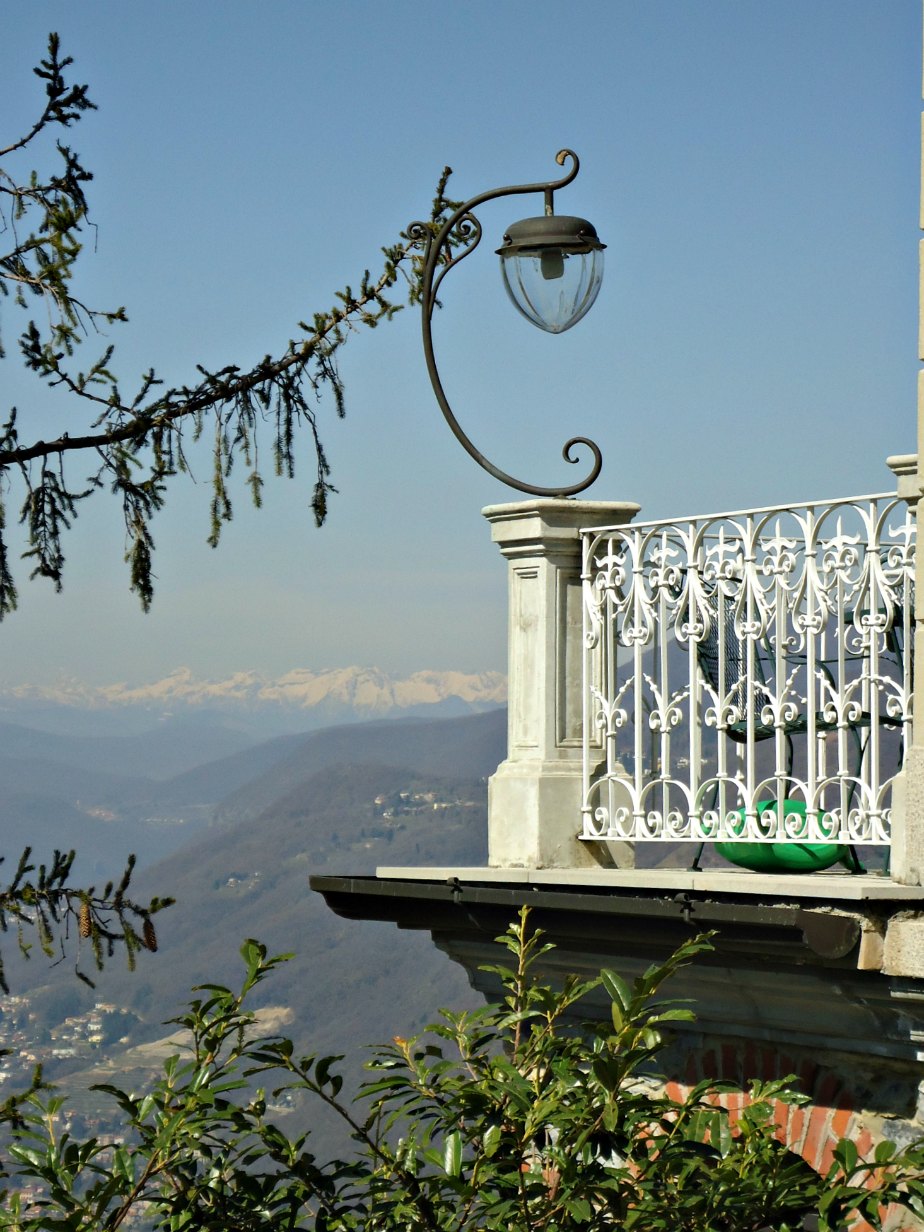 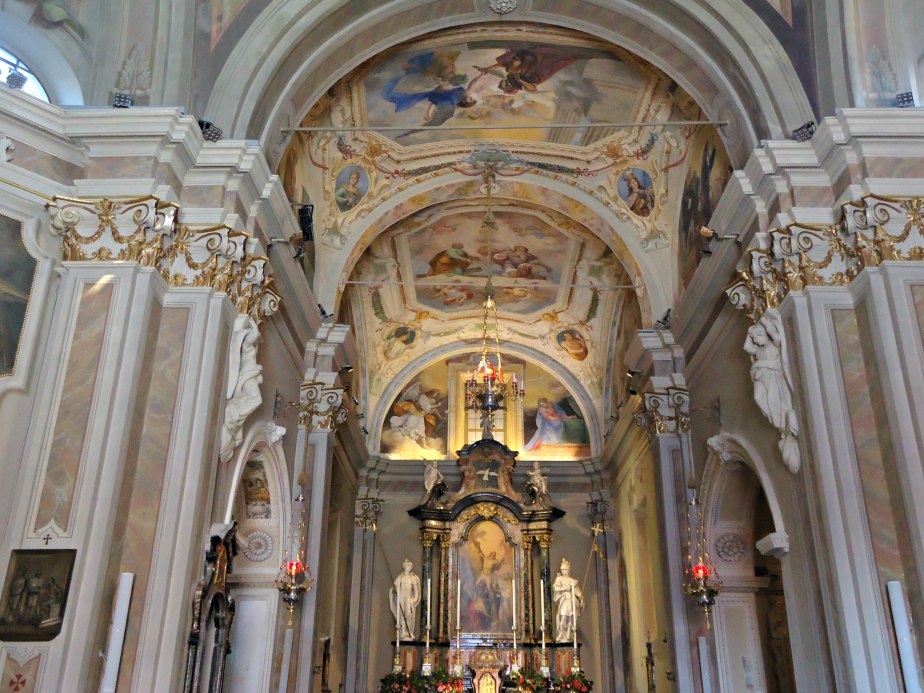 The Como-Brunate Funicolare Station is a short walk around the east side of the lake and the funicular departs every 15 minutes, or every 30 minutes in winter, and takes 7 minutes to travel up just over 1 km of track to the Brunate station 500 mts above the lake. In those 7 minutes everyone is taking photos frantically as the view changes constantly. Going up in the morning is good idea as by afternoon you will be taking photos directly into the sun – which can also give a good effect with the sunlight sparkling on the lake below, and you’ll have the opportunity to take advantage of that on the way back down after lunch.

As the funicular rises up from the lake the historic town of Como looks more and more like a model on exhibition in a museum, and the boats in the harbour rapidly get smaller, shrinking into the distance.

At the halfway crossover point the track splits in two to allow the downhill carriage to pass, this causes much hustle and bustle as everyone in the carriage turns their gaze away from the view and trains their lens on track above.

Brunate is a small town, and most of the residents seemed to be away when we were there. As is normal in European holiday destinations, things pick up from Easter onwards, (we were there the week before Easter), the weather was magnificent and with few other tourists the peace and quiet was perfect.

From Brunate you can go even higher up to Faro Voltiano, a lighthouse built in 1927, 100 years after the death of Alessandro Volta, a local lad made good after inventing batteries. There are a number of statues, squares, museums and of course the lighthouse named in Alessandro’s honour in the Como area.

After alighting the funicular and climbing the stairs to leave the platform, signs all directed us from the funicular to the shuttle bus from Brunate up to Faro Voltiano, but again, that is something that starts at Easter. So……… we set off on the steep walk up a few kilometres of winding roads, cobbled tracks and steep uneven steps. The walk gives the advantage of having many rest stops along the way to catch your breath, only to have it taken away by the view, and take many photos, which wouldn’t happen on the shuttle bus – I’m digging deep here looking for the positives in walking up a very steep hill! 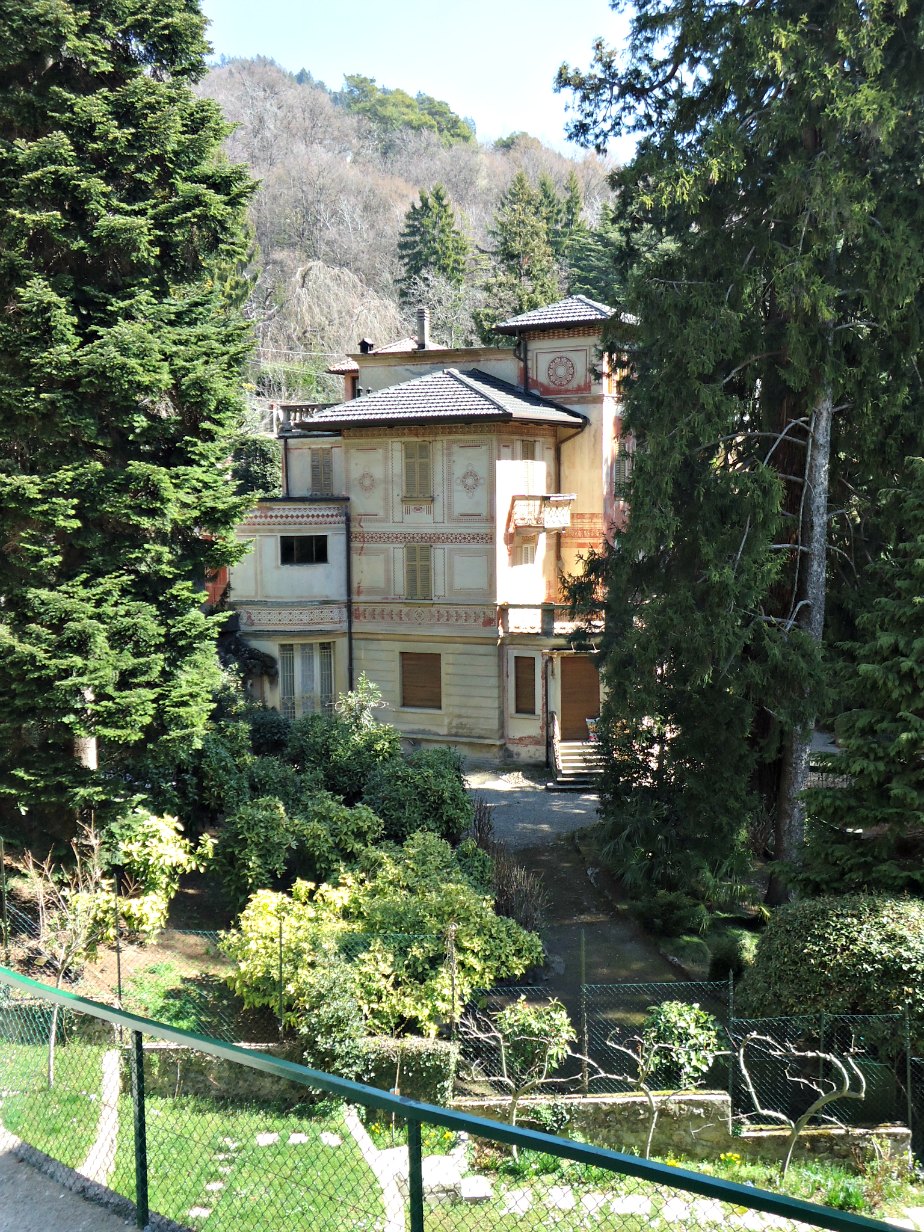 Faro Voltiano and Brunate from Across Lake Como 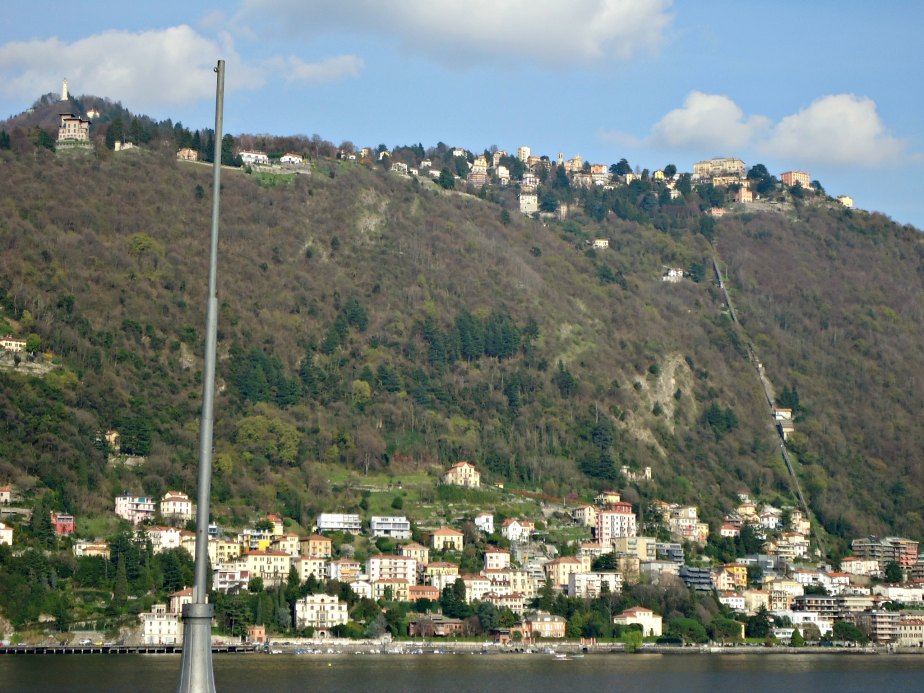 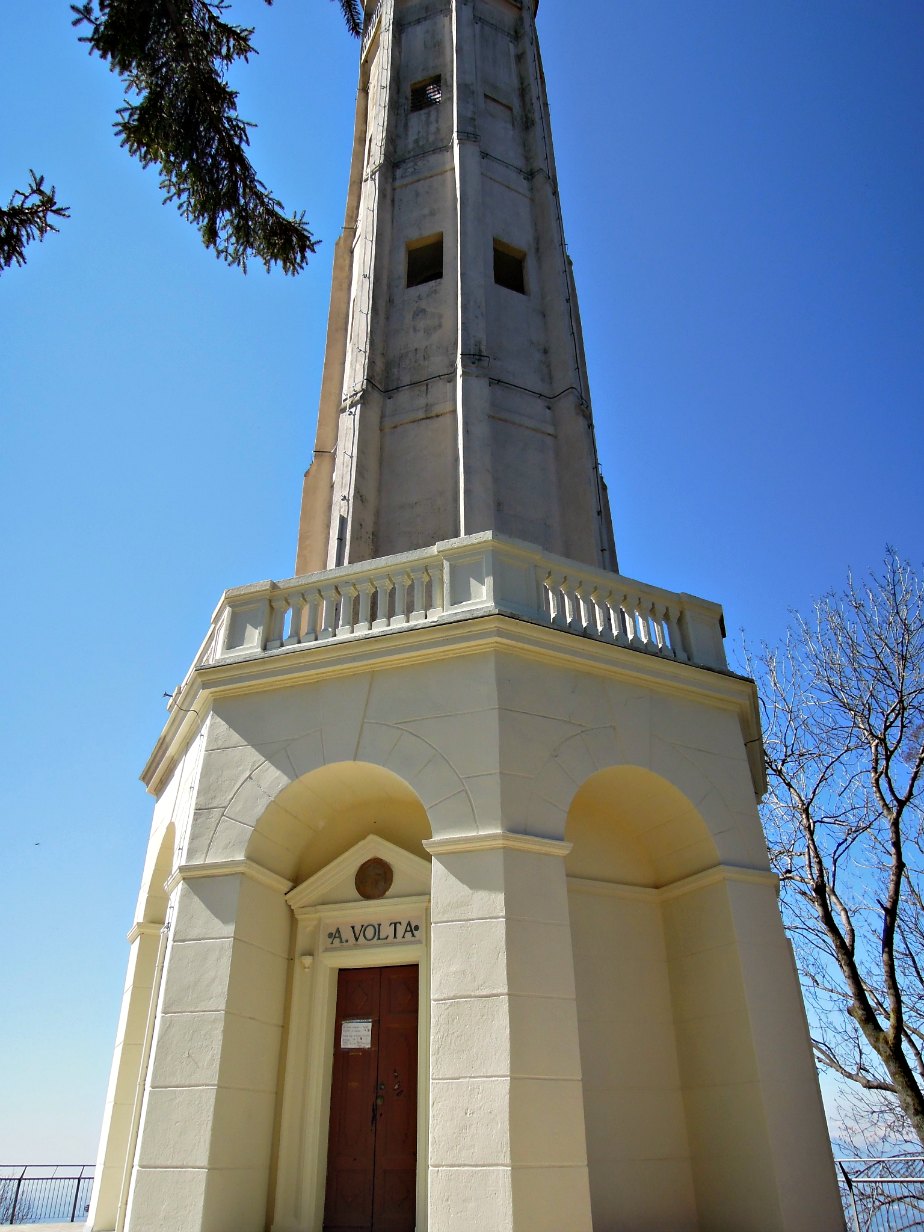 Looking Down on Cernobbio and Villa D'Este

Up the first stairs from the main square you come to a small cobbled piazza outside the church, from here you get your first taste of the view looking north towards the alps of Northern Italy and Switzerland. Behind you is the beautiful little church, Chiesa Sant’ Andrea Apostolo, well worth a look inside. Then you are ready for the up hill climb……………passing villas all shuttered and waiting for the inhabitants to arrive for the summer and peeking between houses to see the amazing view they have from their balconies. In some places you have the choice of heading up a short, steep, uneven path or taking the more gentle climb following the road, both give interesting things to see along the way, the decision is purely based on fitness levels.

We pressed on. The lighthouse is not the most impressive looking building, I held out high hopes for the views from the other side of it, and was not to be disappointed – looking down on the seaplanes flying over the lake as the fast ferry to Bellagio was heading up Lake Como well over 700mts below, passing the lakeside town of Cernobbio, home of the Villa D’Este luxury hotel. During the summer the lake is dotted with boats as this area turns into one of the many playgrounds of the locals enjoying their beautiful lake, the tourists who book their summer holidays here, and of course, the rich and famous.

Switzerland in the Distance

Gates of the Albergo Bellavista, Brunate

The time came to leave the never ending panorama and head back down the hill, looking forward to lunch back in Brunate having worked up quite an appetite. Striding down a different cobbled track for the downhill walk we came across a medieval lookout tower and ancient wall from back in the days when you would see the undesirables approaching from the watch tower knowing, or hoping, you were safe behind the wall that could keep them out.

Back in Brunate hoping to have lunch at the Bellavista Hotel having read the delicious food is served at tables lined up at the windows, we were met with closed gates, not due to open until the following weekend – Easter – wouldn’t you just know it? I called them later to try to book a table for Easter Sunday lunch but they were booked out – again, wouldn’t you just know it?? A couple of weeks later I booked a table there for lunch, but when we arrived to catch the funicular up from Como we found that the funicular was closed for the next few weeks for maintenance before the peak summer season – and again, wouldn’t you just know it??? So lunch at the Bellavista was not to be, on this holiday at least.

I asked a man in one of the souvenir shops in the main square if there were any restaurants in the area that would be open, he directed us down a lane on the other side of the hill to Cacciatore Trattoria, a home style restaurant with seating both inside and out.

As we were quite hot after all the walking we began our meal sitting outside in the shade, it soon became quite chilly so we moved into the sun, the meals and local wines were delicious. Then as the temperature dropped further, we were on the shady side of the hill, we moved inside for a cheese platter and another glass of wine. I think the locals would enjoy this place in the evenings to catch up with each other and discuss their days.

On the path outside Cacciatore there was this access cover for the aquaduct, I’m not sure if it is still functioning, but it looked like it hasn’t been opened for some considerable time.

The only problem for me at Cacciatore Trattoria was a rather smelly squat toilet, I couldn’t bring myself to use it. We headed back to the area near the Brunate funicular station, there were a few seats outside in the sun at one of the bars so we ordered coffee. I asked if they had a bathroom I could use, I was told to go to the brown door with a gesture in the direction I was to walk. About 20 mtrs down the road there was an unmarked brown door, I tentatively pushed the door a bit frightened of what I might find – but there was no cause for alarm – perfectly clean public toilets. So remember when visiting Brunate, look for the brown door just to the right after getting off the funicular.

Heading back down to Como at the end of a fantastic day in Brunate there are many more photo opportunities, the best place to be on the funicular is standing right at the front window. If you sit in the front seat someone will stand in front of you, so stake out your territory as soon as you get on. We discovered this by accident as we were about to board the previous funicular the doors suddenly closed and having put our return tickets into the turnstile we were now trapped between the turnstile and the boom gate waiting for the next funicular. This foiled the plans of a group of teenagers who had deliberately missed the previous carriage thinking they would be first in line to choose the front row for the trip down – that position was now reserved for us!!! I could see them trying to formulate a plan for how they were going to get in to the carriage one door back and leap over the chairs to get the front row first. We calmly took up our ‘reserved’ position and held our ground.

Curious Graffiti next to the Funicolare Track

Book a Tour on your Trip Over to Lake Como

Itinerary for Trip Over to Italy – Milan, Como and Venice

Between down pours, Tunks Psrk continued to fill with water. Lucky someone thought to put the "Ground Closed" sign in the middle of the cricket ground 🤣 I think anyone who turned up to play would have realised after wading through knee deep water on to the sodden grass that it wouldn't work out!😂
.
.
.
#tunkspark #floodedpark #waterwatereverywhere #greengrass #aftertgerain #walkinthepark #sydneyinspring #sydneylife #sydneyaustralia #myhometown #cricketground #toowettoplay #waterviews ...

At the eastern end of Pyrmont Bridge, one of the old sandstone pylons dwarfed by highrise towers now all around the Darling Harbour area.
.
.