Trip Over to the Czech Republic

Everywhere you look there is art in Prague, whether it is in the form of the statues on the Charles Bridge, the architecture of the old and modern buildings, political statements or modern art. Prague is an amazingly beautiful city and the two weeks I spent there was barely enough time to explore everything. Fortunately Prague is a great city for walking, as all the works I mention in this story are easily found without going too far or up many hills, we’ll cover the more far flung and lofty in other stories.

Beautiful things are everywhere, you just come across them. On a bench in Wencelas Square casually sits a perfect bronze sculpture of a man, I can’t find any information of who he is, who created him or what he represents, but I like him. He just sits there in the square watching the passing parade of shoppers, sightseers, and locals, while good King Wencelas looks down from his horse at the top.

Further up through the old town next door to the Spanish Synagogue, in Dusni Street in the historic Jewish Quarter, you will find a statue by Jaroslav Rona, of Franz Kafka being carried on the shoulders of a giant headless man. Based on one’s of Kafka’s stories, “Description of a Struggle”, which tells the story of a political candidate carried through the streets of Prague on another man’s shoulders. But in this case the man being carried is Kafka himself. There are often crowds gathered around this statue, and tour groups stop there, we had a coffee outside a great coffee shop across the road so I could pick my moment to run across and get some photos.

Sitting on a Bench in Wencelas Square 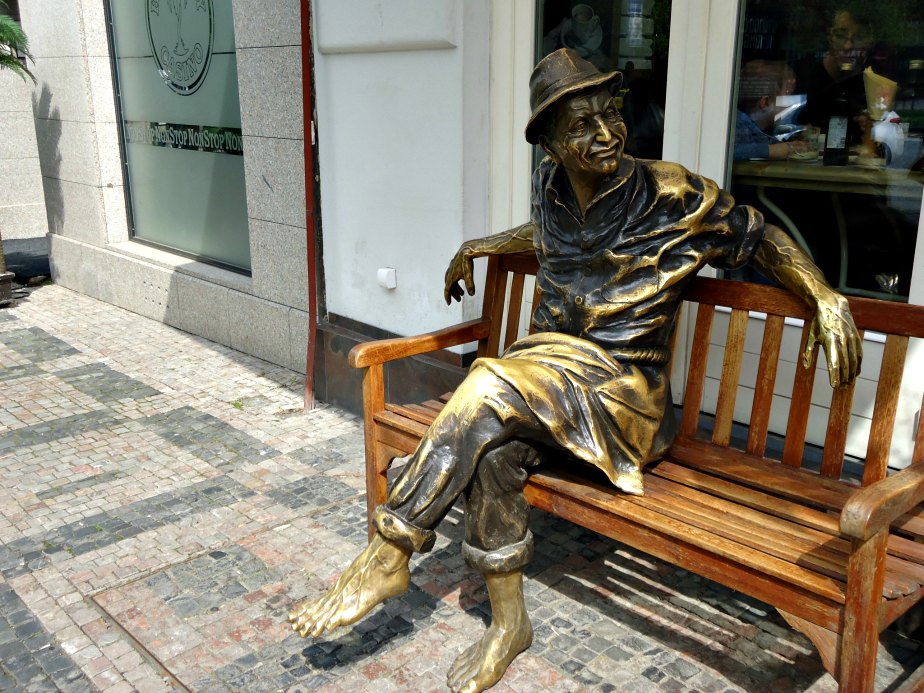 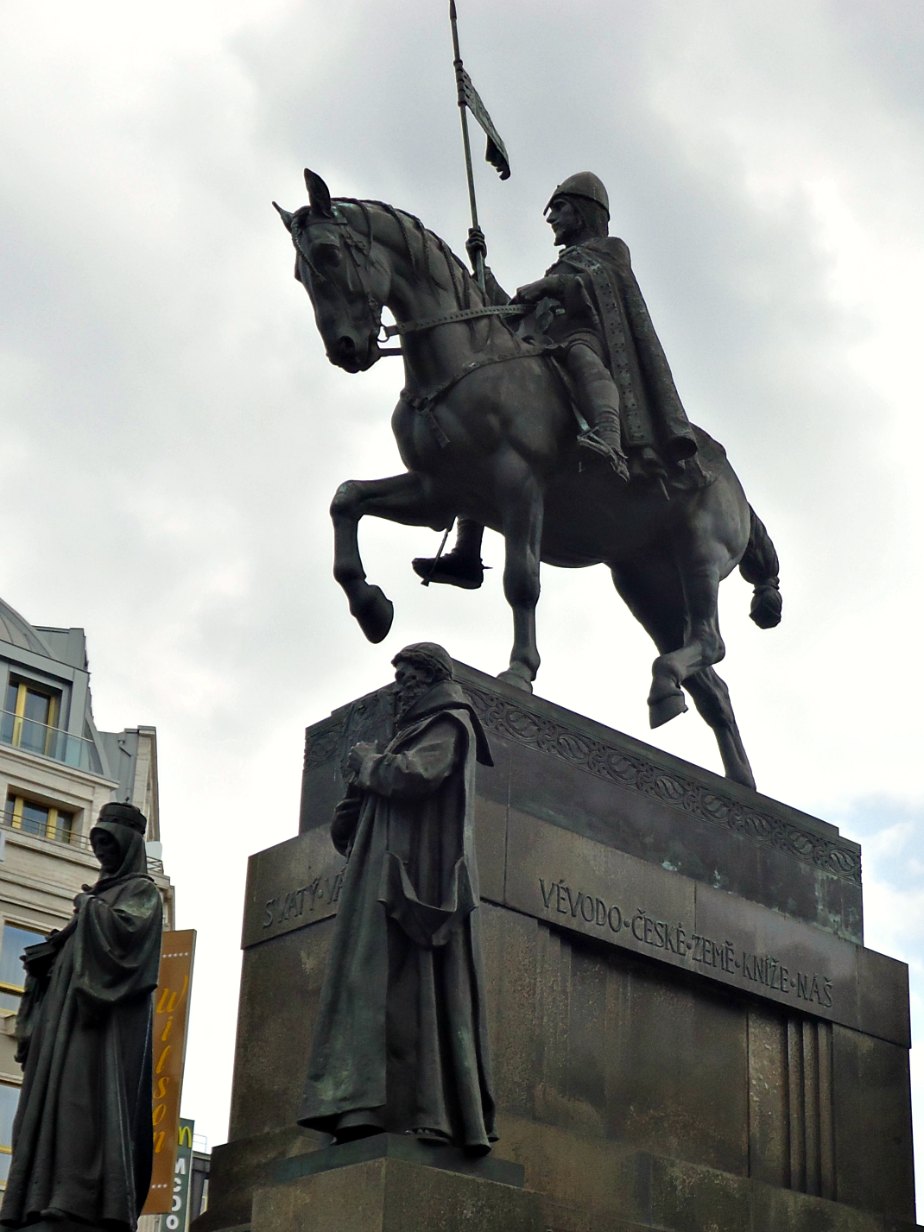 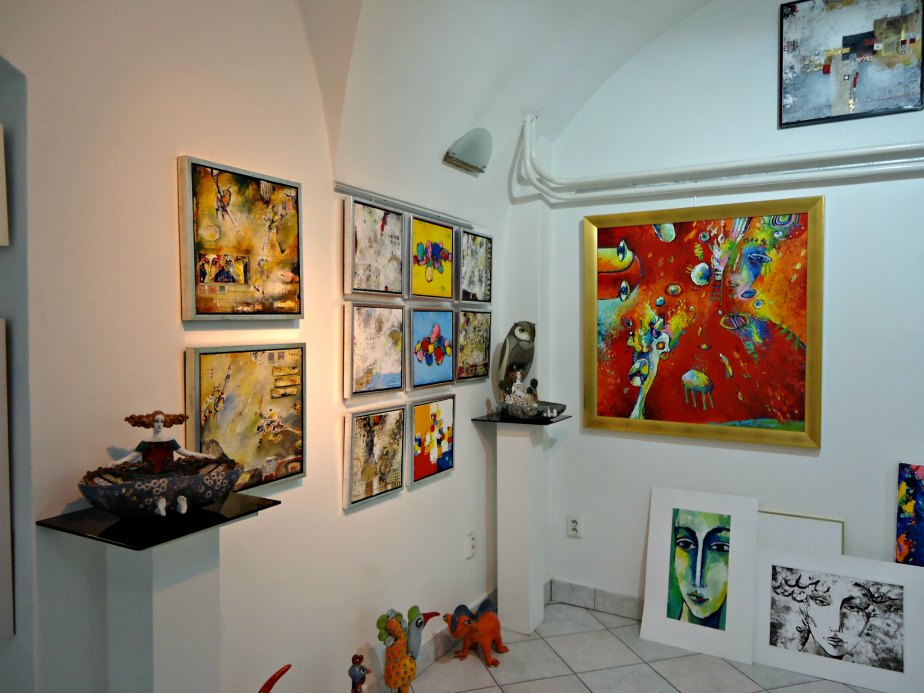 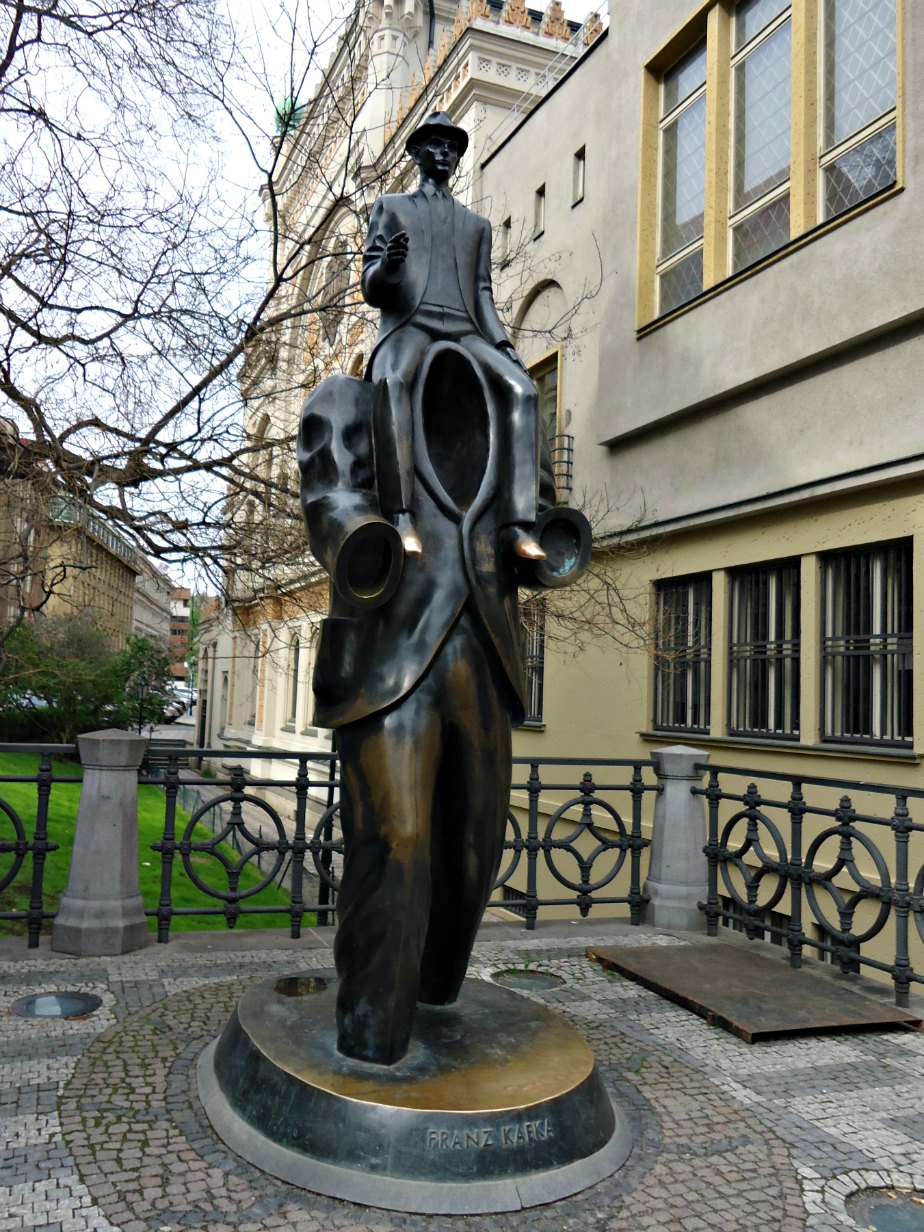 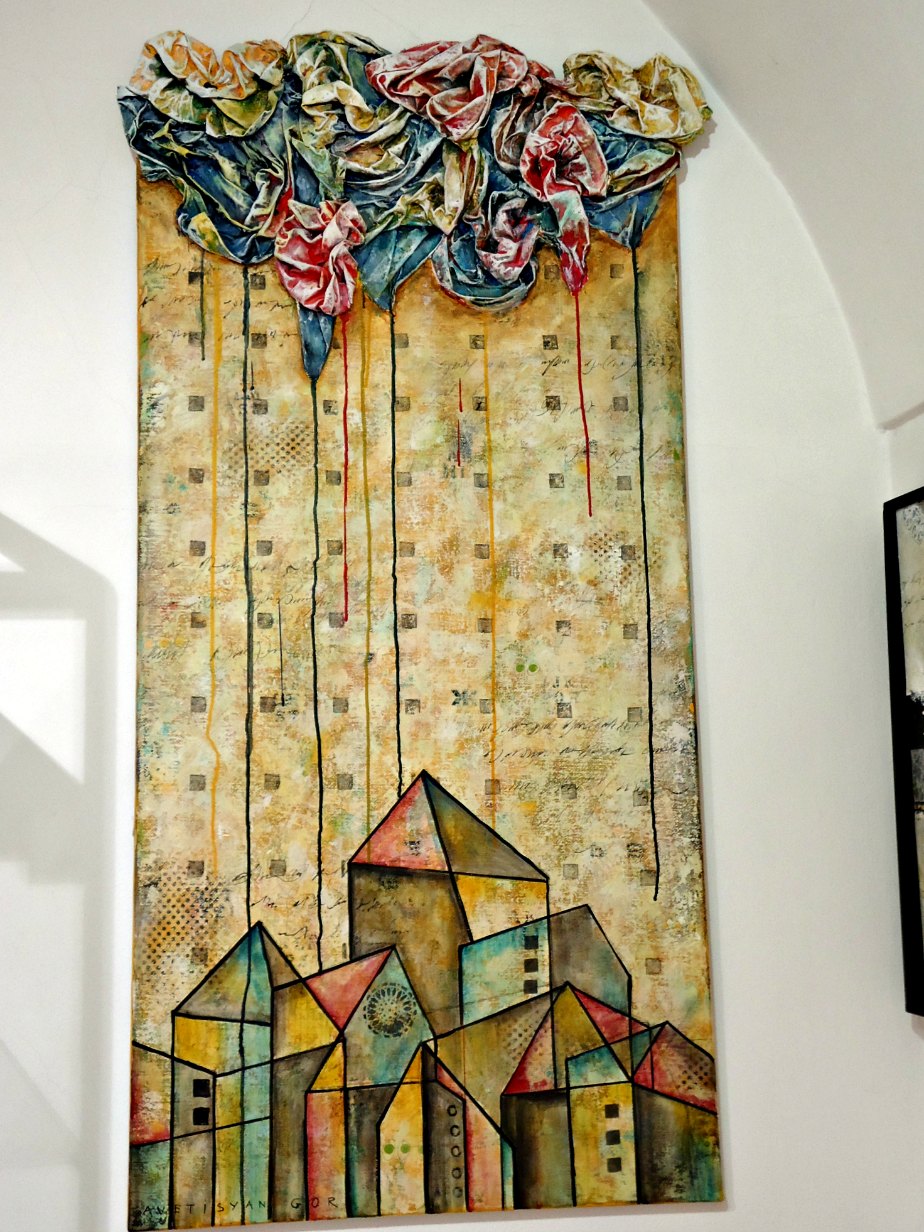 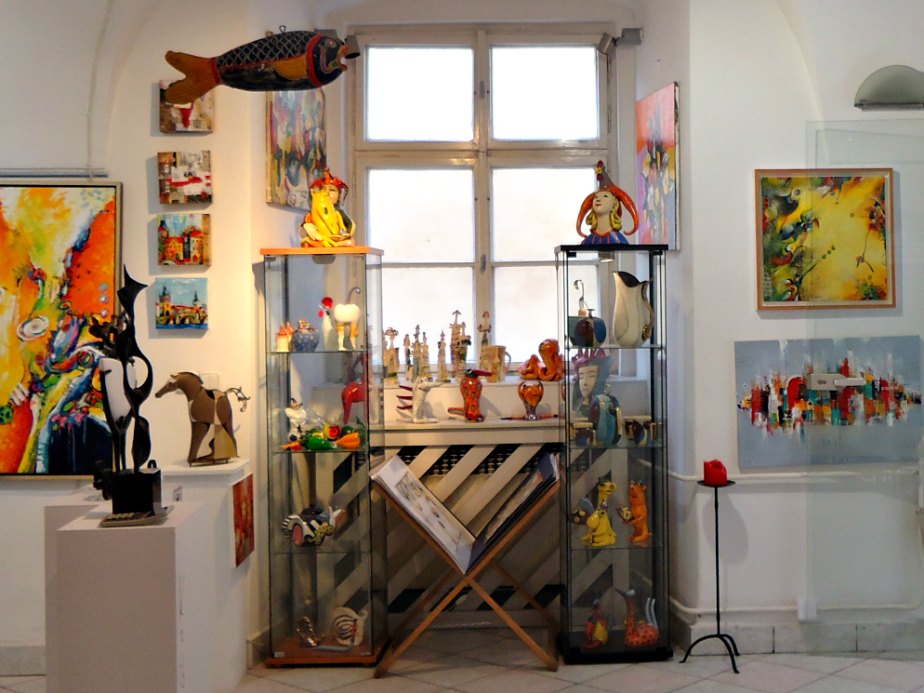 Art is found not just out on the streets and large galleries, small galleries are everywhere, like Inter Art Gallery in Husova Street is worth popping in to. This one showing art by Gor Avetisyan, and run by his sister is really interesting, a very talented family. Beautiful 3D details added to paintings using plaster really bring them to life, and the little statuettes and vases are exquisite.

At the foot of Petrin Hill, not far from where you catch the funicular to the top of the hill, you will find the Memorial to the Victims of Communism unveiled in 2002, twelve years after the fall of communism. The bronze plaque reads, “The memorial to the victims of communism is dedicated to all victims not only those who were jailed or executed but also those whose lives were ruined by totalitarian despotism”. The memorial, created by Czech sculptor Olbram Zoubek, and architects Jan Kerel and Zdenek Holzel, shows seven bronze figures descending a flight of stairs, the further they are from you the more decayed they are, their bodies breaking up, limbs missing. The bronze strip up the middle of the path showing the alarming statistics of those impacted by communist rule, those arrested, those forced into exile, those who died in prison, those shot trying to escape, those executed, a sobering moment in a beautiful park.

On Narodni Street in a small arcade is a bronze plaque showing hands reaching out from the wall, dated 17.11.1989, the date of the Velvet Revolution, this memorial is to the students who were attacked and beaten by the communist police desperately trying to hold on to power eight days after the fall of the Berlin Wall – the day 41 years of communist rule came to an end, and Czechoslovakia became the Czech Republic, 17th November is a national holiday in the Czech Republic.

Memorial to the Victims of Communism 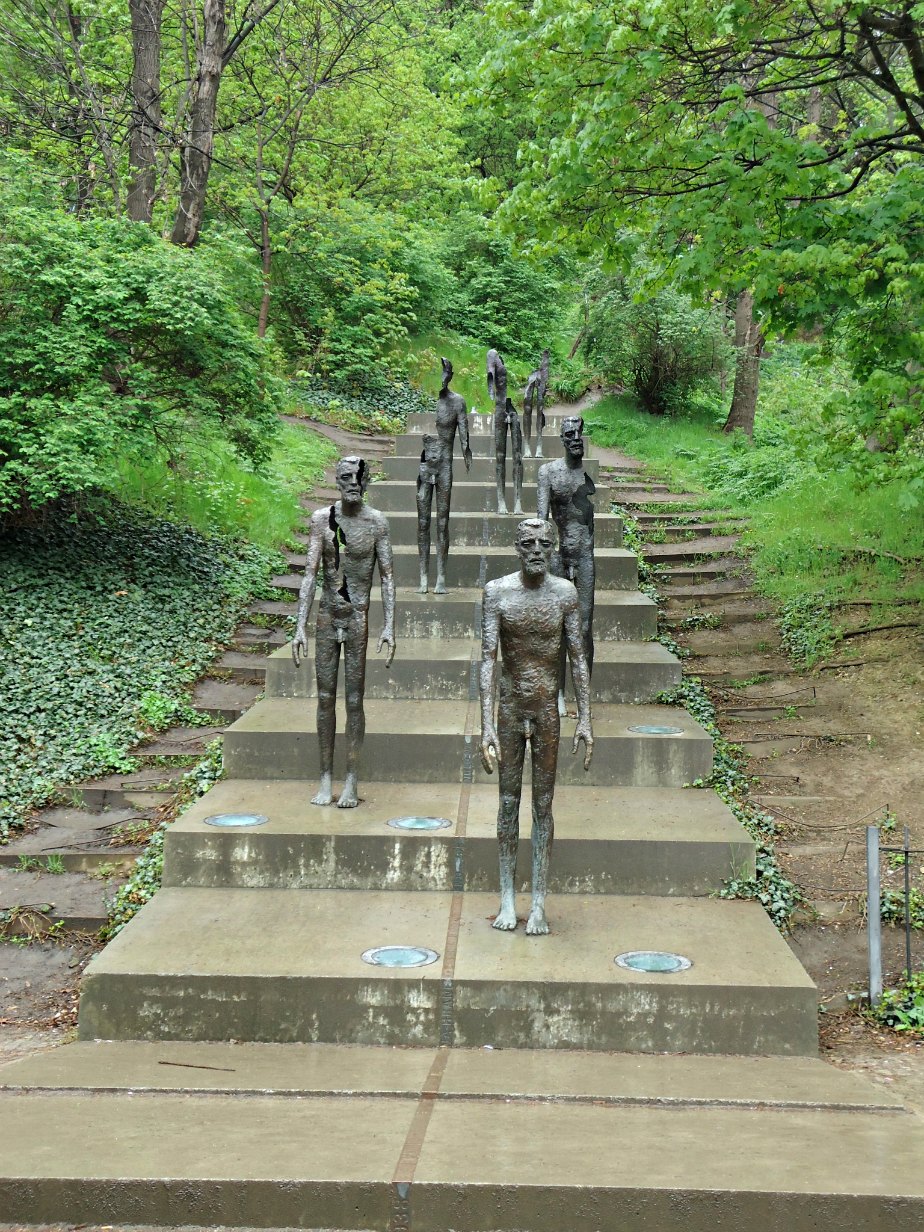 Hands from the Velvet Revolution 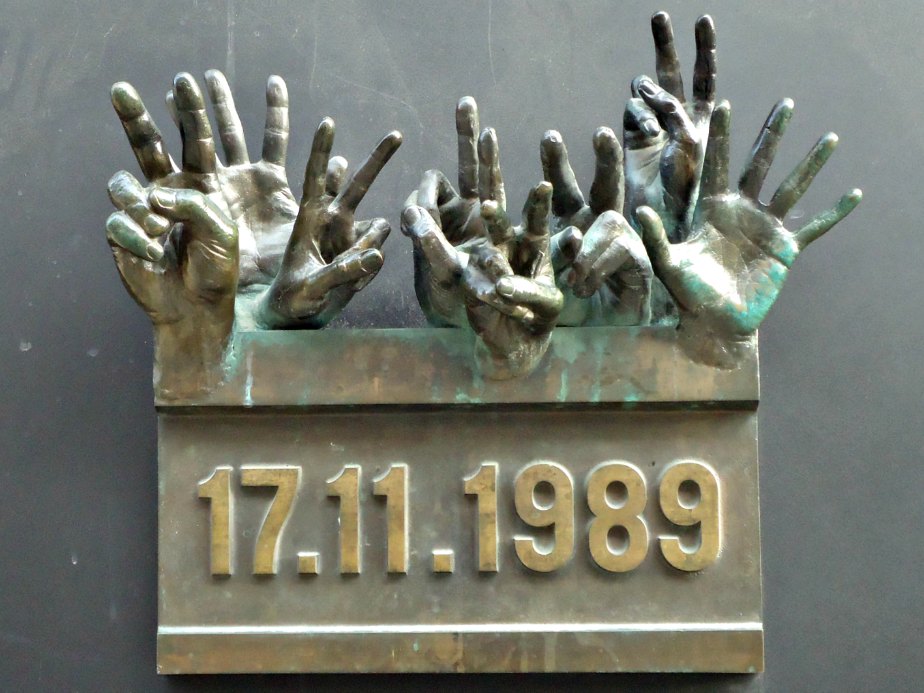 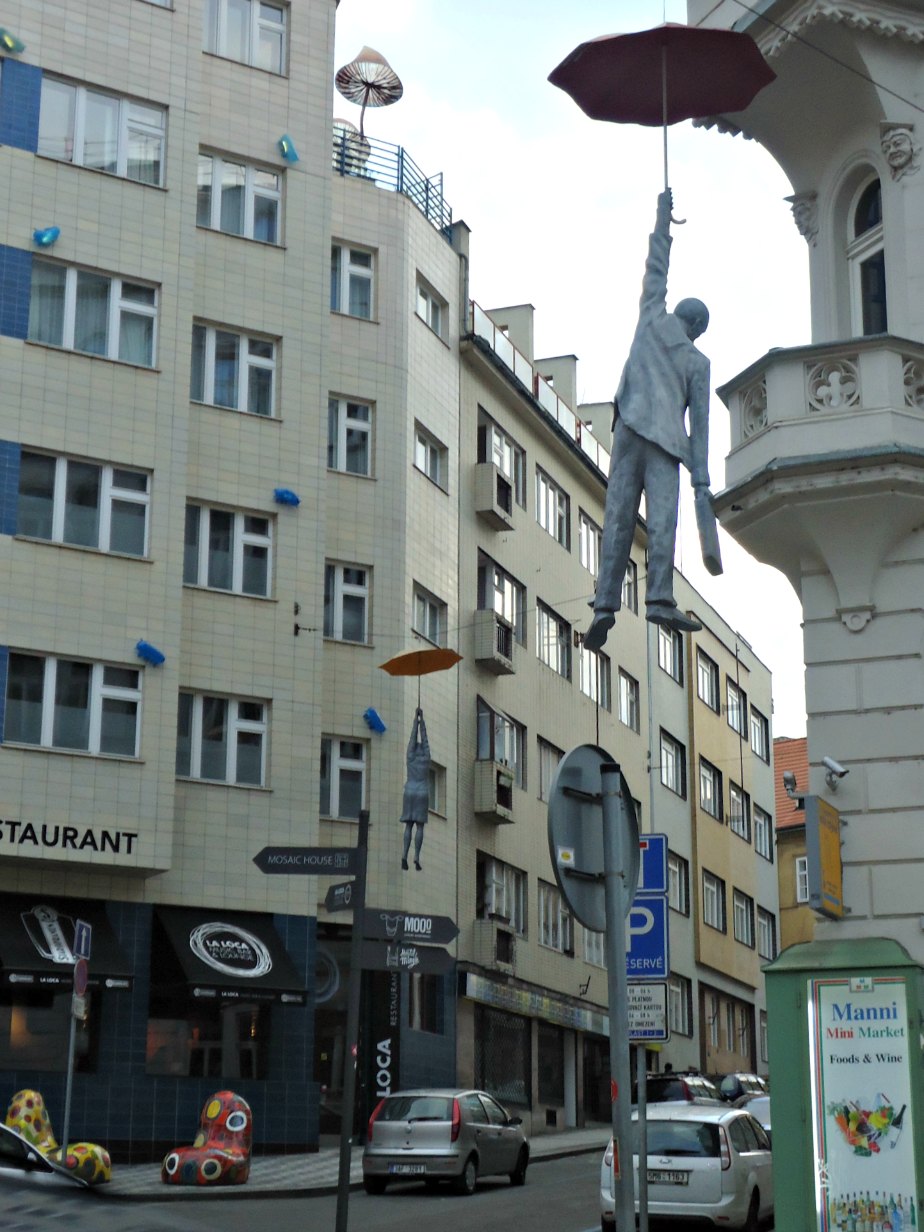 Boulangerie Patisserie with Man hanging from an Umbrella!

Hanging above the street just near our favourite coffee and pastry shop in the New Town area, Boulangerie Patisserie, a man and a woman hanging from umbrellas, called “Slight Uncertainty” by the artist Michal Trpak, they represent feelings during the depression. I guess slight uncertainty would be a bit of an understatement if the only thing stopping you from dropping to the road was an umbrella, but you can imagine where he was going here. Prague is filled with interesting and unusual things, as you amble around the streets don’t forget to look up as well as all around.

There is such great respect for art that they don’t confine it to galleries and museums, it is everywhere, shopping centres, hanging above the streets and in arcades. One piece that the powers that be deemed too offensive to be in public is displayed in the grounds of a private museum. They took it promising to always leave their gates open so the public could access it if they wanted to – and they do, in droves! The fountain called “Piss” by Czech artist David Cerny, can be found in the grounds of the Franz Kafka Museum in Mala Strana. The bronze basin of the fountain is the shape of the map of the Czech Republic, there are two gyrating mechanical “gentlemen” standing in it peeing on their country. Apparently, visitors can instruct the “gentlemen”, by SMS, to write messages in pee, and they do, with much hip swivelling and penis waggling- but that’s another story.

Kids Pay Next to "Piss" by David Cerny

Water Carafe and Earrings from Artel

David Cerny has over ten sculptures displayed in Prague, all considered to be slightly offensive but amusing, he has been accused of being a hooligan, and some have tried, and failed, to have his work banned. If you don’t like it, don’t look at it – on the grand scale of offensive things in public, in my view, you’re trying to ban the wrong thing!

After leaving the Franz Kafka Museum walk down through Mala Strana before going under Charles Bridge, on the right is a glass shop, Artel, all things crystal couture are available here. (I bought a beautiful water carafe that I just love on my bed side table, and many pairs of earrings). Then go under the bridge and just to the left is a little shop called Vanda and Valerie, tucked into the wall of the bridge selling the most amazing hand painted mugs, (yes, I bought some!), earrings and other nick nacks, definitely worth taking a look before going to look at the Lennon Wall – the wall’s owners, the Sovereign Military Order of Malta, allow the graffiti, song lyrics and messages of peace to remain there. Occasionally it gets painted over then it all starts again. On the anniversary of John Lennon’s death there is a candle light vigil.

Come back down from the Lennon Wall and continue along the path through Kampa Park on the west side of the Vltava River. The Giant Bronze Babies are near the Kampa Museum, these sculptures of crawling babies all have weird smushed in faces. More of these babies can be seen crawling up the TV tower.

Looking out from Kampa Museum

The Kampa Museum houses the sculpture garden, and many more fascinating art works on display inside. Looking out of the window to the river you can see the Yellow Penguins, by the Cracking Art Group, made from recycled plastic bottles taken from landfill sites. The penguins are marching in protest of what is happening to their Antarctic home due to global warming and environmental destruction.

Sitting out on the river at one of the breakwaters is a giant timber chair, made by Magdalena Jetolova called the Vltava Chair, the chair was washed away in one of the great floods and found 50kms down river.

Back across the river in Husova Street, between the Old Town Square and Charles Bridge if you look up you will be shocked to see a man dangling by one hand from a piece of wood jutting out from the roof, at first everyone gasps – is a suicide attempt? No, it’s another of David Cerny’s statues. This one is Sigmund Freud hinting at the powerlessness and hopelessness of man in the modern world, but not willing to let go.

Behind shops near Narodni Trida Metro Station sits an enormous rotating head of Franz Kafka by David Cerny. It has 42 rotating layers and when they all align it forms the Czech writer’s face. There is a cocktail bar nearby, the perfect venue to watch this metamorphosis take place.

Back near Wencelas Square, inside an art nouveau arcade called Lucena Pasaz, just up Stepansha Street opposite the Grand Hotel Europa, there is another David Cerney sculpture, this time possibly mocking the current Czech President, Vavlav Klaus, a frequent subject of Cerney’s derision. Here as King Wencelas sitting in the same pose as King Wencelas on the statue outside in Wencelas Square, astride his horse, but he doesn’t seem to realise the horse is dead, upside down and unceremoniously suspended from the ceiling.

David Cerny never comments publicly on his works – so over to you – make of it what you will….

A Freudian Moment by David Cerny

The Sculpture Garden at Kampa Museum

Book a tour on your Trip Over to Prague

Itinerary for Trip Over to Prague and Berlin

Flights from Sydney to Prague via Dubai with Qantas/Emirates

Stayed for 2 weeks in a beautiful apartment near the Dancing House, found on Airbnb.

Stayed for 2 weeks in Berlin in one of the magnificent penthouse apartments at Gorki Apartments near Rosenthaler Platz U-Bahn Station.

Return flights with Lufthansa from Berlin to Frankfurt, then Qantas/Emirates from Frankfurt to Sydney via Dubai.