Trip Over to Istanbul

The Bosphorus is the magnificent body of water that separates Europe from Asia, cutting straight through Istanbul, the only city in the world to span two continents. Giving access from the Mediterranean to the Black Sea, it has a constant stream of cargo ships passing through, with the ferries that cross from the European side to the Asian side dancing between them as if it was all choreographed.

There are a few tour operators running cruises, so the best idea is to walk down to Eminonu just off the Galata Bridge and have a look at the timetables to see which one suits you. The long cruise leaves Eminonu at around 10.30am, passing by all the Istanbul landmarks, palaces and the old Ottoman Yali summer houses perched on the edge of the Bosphorus, going all the way up to Anadolu Kavagi near the Black Sea, then returning getting you back to Eminonu at about 4.30pm. Get to the wharf in plenty of time to get your ticket, then make sure you get the seat you want. My favourite spot on cruises is always outside, undercover (if possible) at the back. 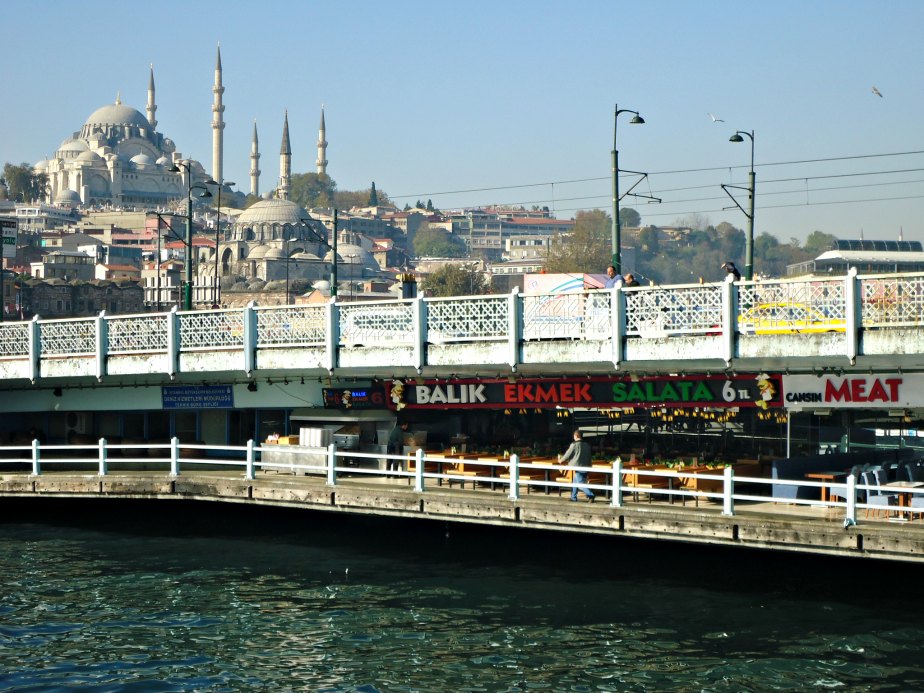 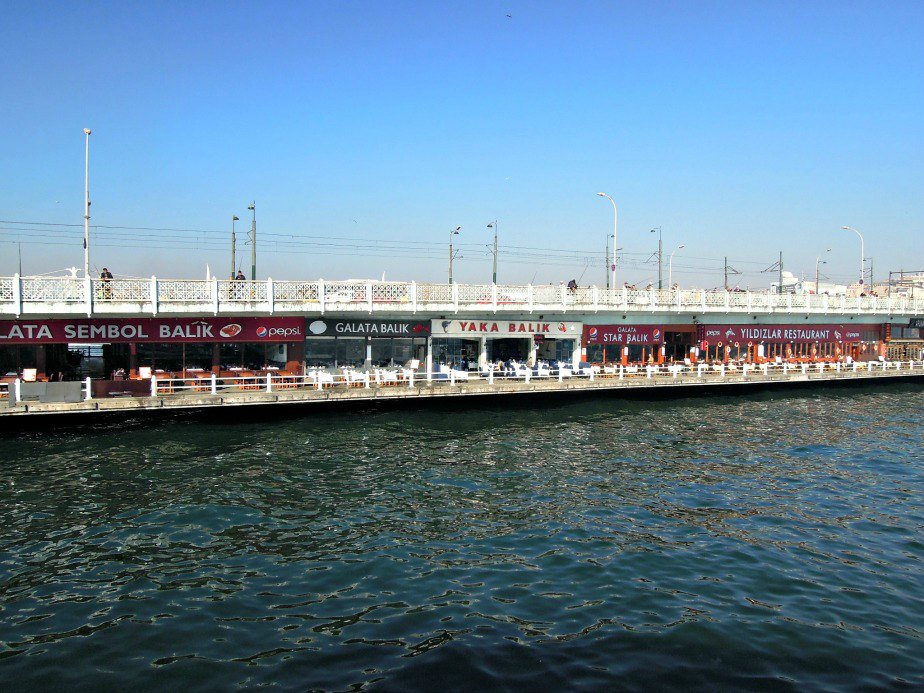 Galata Tower Looks Over the Bridge 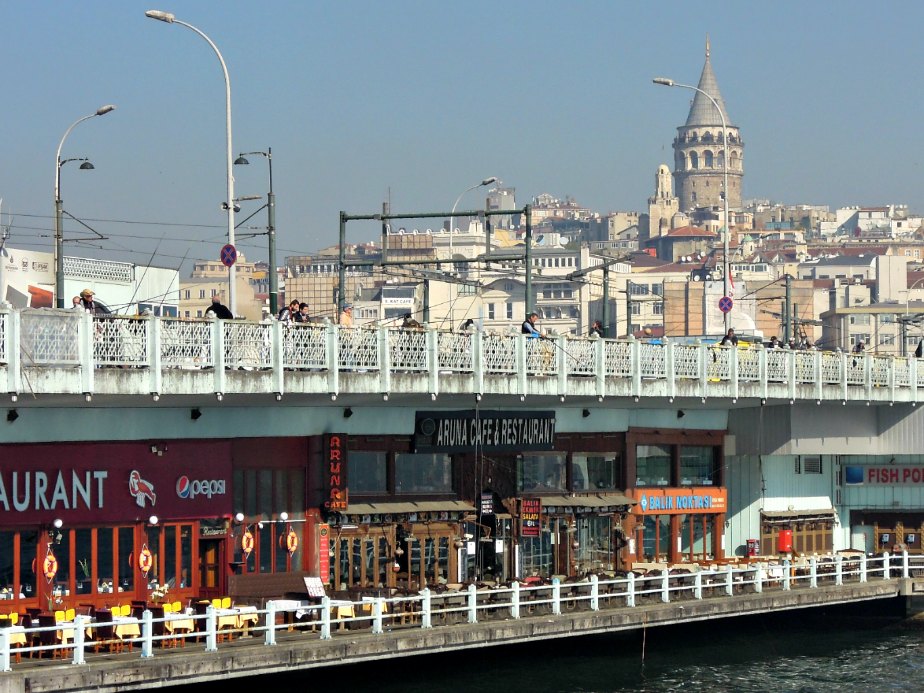 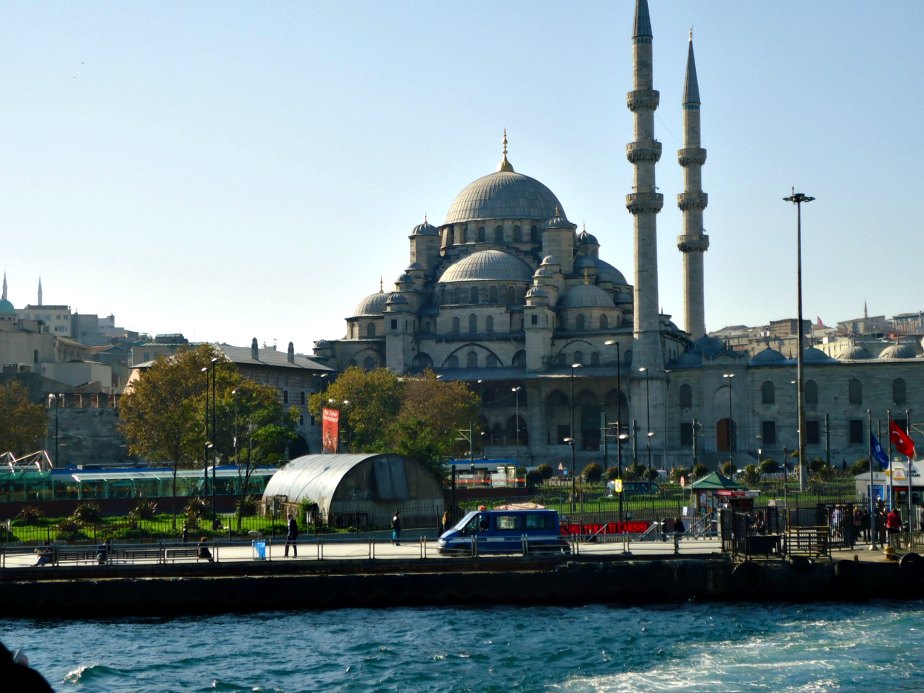 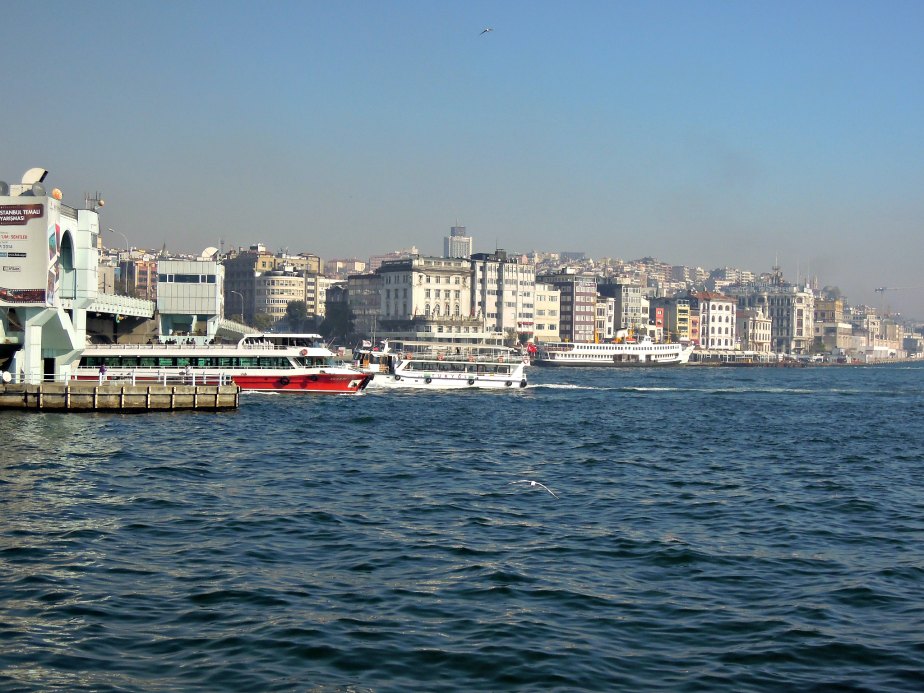 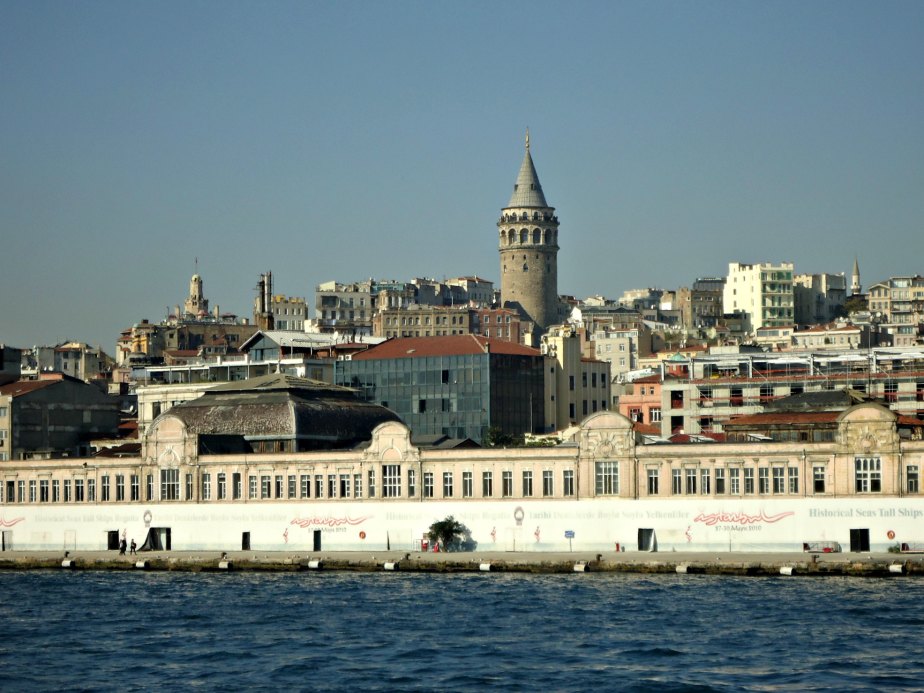 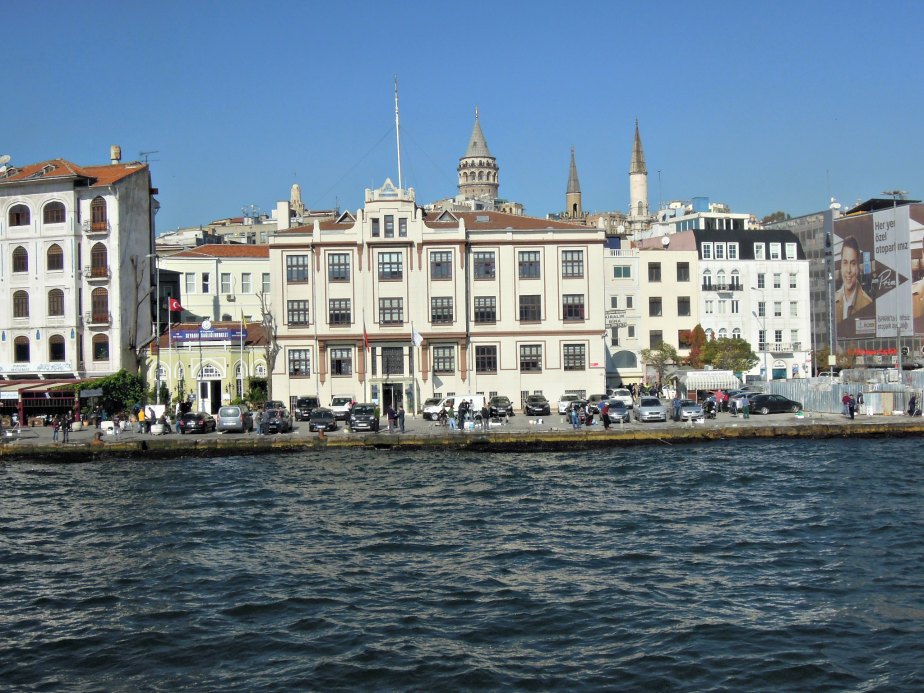 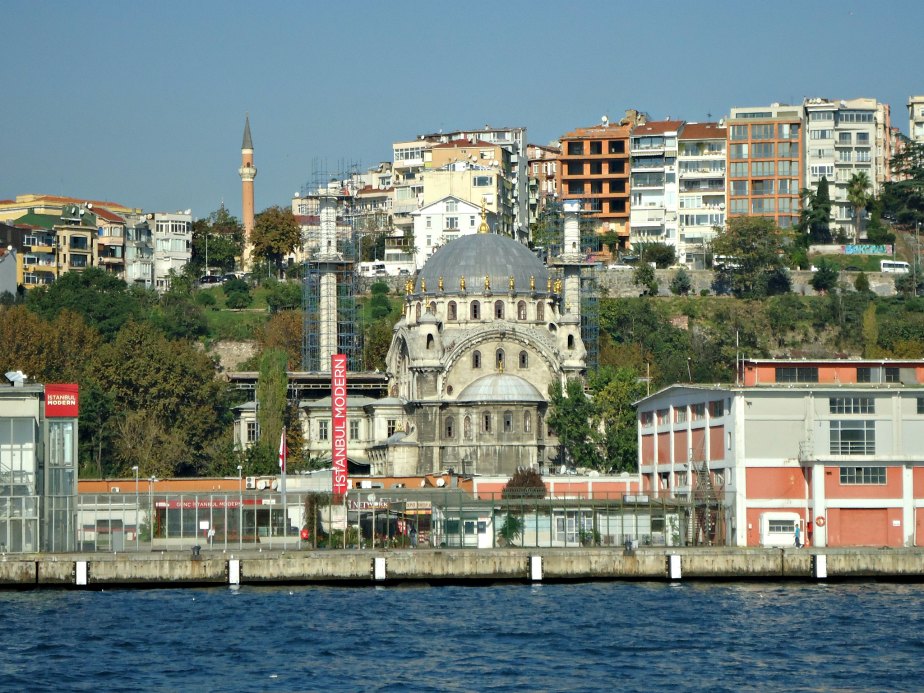 Pilot Boat on the Bosphorus 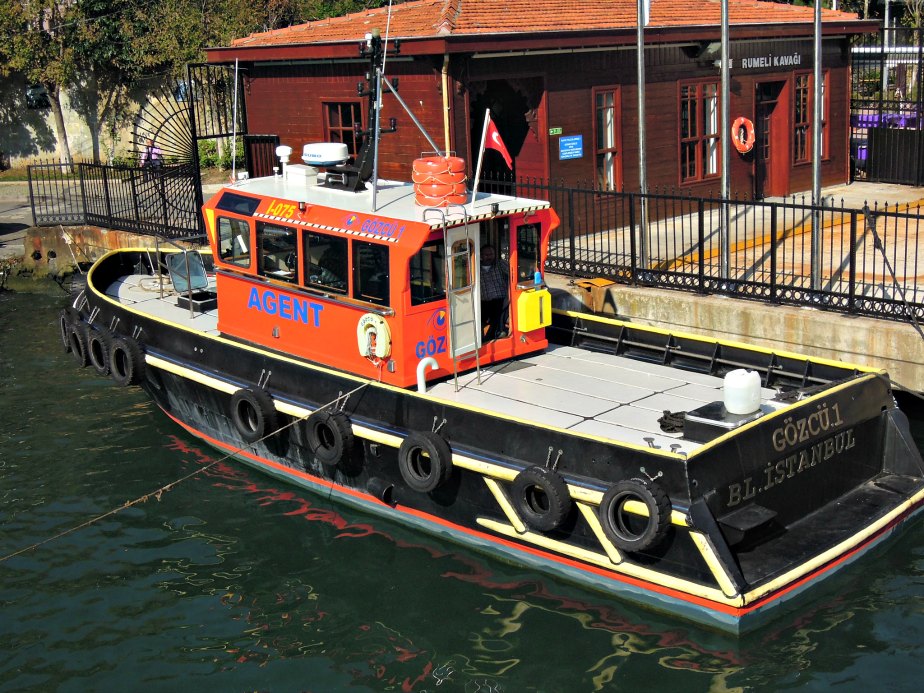 As the ferry pulls away from the wharf you get a great view of Galata Bridge – traffic, fishermen and pedestrians on the top level, many fish restaurants on the lower level, and ferries passing under the middle to make their way up the Golden Horn. From the ferry you can see all the Mosques on the hill up towards the Grand Bazaar, and just across the road from the Eminonu Ferry stop is the New Mosque, called the ‘New Mosque’ because it is – built in the second half of the 17th century – the others were built much earlier! The Suleymaniye Mosque was finished in 1557, the Rustem Pasha Mosque finished around 1563, the Blue Mosque around 1616, so the New Mosque really is quite new, opening its doors in 1665.

You also get a different view of Topkapi Palace and the Blue Mosque, then as the ferry turns you pass Karakoy you can still see the Gatata Tower always on the lookout over the city. The Istanbul Modern Art Gallery doesn’t look so impressive from the water, but inside it is quite a different story. They give you a map onboard so you can identify what you are looking at, and all the traffic that uses this magnificent water way is all very interesting from the tiny fishing boats, to the many pilot boats that take the pilots out to guide the giants of the sea safely through the shipping lanes. But I saw no sailing boats, of any size. Maybe it was too early in the season for them – maybe they sail somewhere else…………

Houses on the Bosphorus

Looking at Dolmabahce Palace from the water shows how enormous it is, this is where the Sultans moved to with their Harem after they felt the need for an upgrade from Topkapi Palace. The white and gold fence along the water’s edge goes on forever, with exquisite gates to open when the Sultan’s boat pulls in. Just as impressive to look at from the water as visiting the gardens and inside the Palace. Behind it, the Ritz Carlton Hotel towers up into the sky, we had a few fantastic Sunday brunches there, a very relaxing way to spend a few too many hours!

After passing Dolmabahce Palace, then the Maritime Museum, the next collection of buildings are all either 5-star hotels or part of Istanbul University, which is an interesting area to walk around. Just before you go under the Bosphorus Bridge, opened in 1973, on the European side of the water is the very elegant Ortakoy Mosque. The next bridge spanning the Bosphorus, the Fatih Sultan Mehmet Bridge, opened in 1988, looks very similar to the Bosphorus Bridge, I guess they thought, “If it works, duplicate it!”

Then you come to the Fort of Europe, also known as Rumelihisari Castle, built in the mid 1400s to monitor use of the Bosphorus and prevent attacks on Constantinople coming from the East. Having completed his fortresses, Mehmed proceeded to levy a toll on ships passing within reach of their cannon. A Venetian vessel ignoring signals to stop was sunk with a single shot from the canon and all the surviving sailors were beheaded, except for the captain, who was impaled and mounted as a human scarecrow as a warning to further sailors that they mean it.

A bit of Renovation Needed

The ferry makes a few stops along the way on either side of the Bosphorus to pick up and set down passengers, then stops at Anadolu Kavagi on the Asian side, where you can get off, walk up the very steep hill through the very pretty village to the ruined medieval castle. There is limited access, (let’s say none), to the castle as they are doing archeaological digs to find out more about its Byzantine origins. From here you can see way out into the Black Sea to where the black smog hangs in the air from all the shipping tankers. The supports were in place for another bridge to cross the Bosphorus, the Yavuz Sultan Selim Bridge, a slightly different design to the other two bridges, but only very slightly.

After walking back down to the village we still had time for a delicious seafood lunch in one of the restaurants along the water’s edge before boarding the ferry again for the trip back. We chose a restaurant to the far left (as you get off) of the ferry stop, a nice table in the shade, no one wanted that table as they all wanted to sit in full sun – not something I have any desire to do. The waiter was very apologetic that he had no more tables in sun, but for us it was perfect.

Having spent the trip up the Bosphorus taking many photos is was nice on the way back to just look, and of course snap a few pics of the seagulls that fly along with you hoping to be fed a few crumbs by the passengers. Of course we had to take photos of the majestic mansions and some in a terrible state, in need of a lot of care, and there were a few more palaces that were able to sneak into the lens. A fantastic, relaxing day out on the water flitting from Europe to Asia and back again.

House on the Bosphorous

One of Many Ships Going Under the Bosphorous Bridge

Book a tour on your Trip Over to Istanbul

Itinerary for Trip Over to Istanbul

Flew from Sydney to Istanbul via Dubai, with Qantas/Emirates.

Stayed in an apartment near Galata Tower for a month – rented through Istanbul Place Apartments.

The apartment came with 2 transport cards, that we just needed to top up and we had tickets for all trams, funiculars and the metro.

Istanbul Place Apartments arranged for us to be picked up at the airport on arrival, and taken back at the end of our holiday.